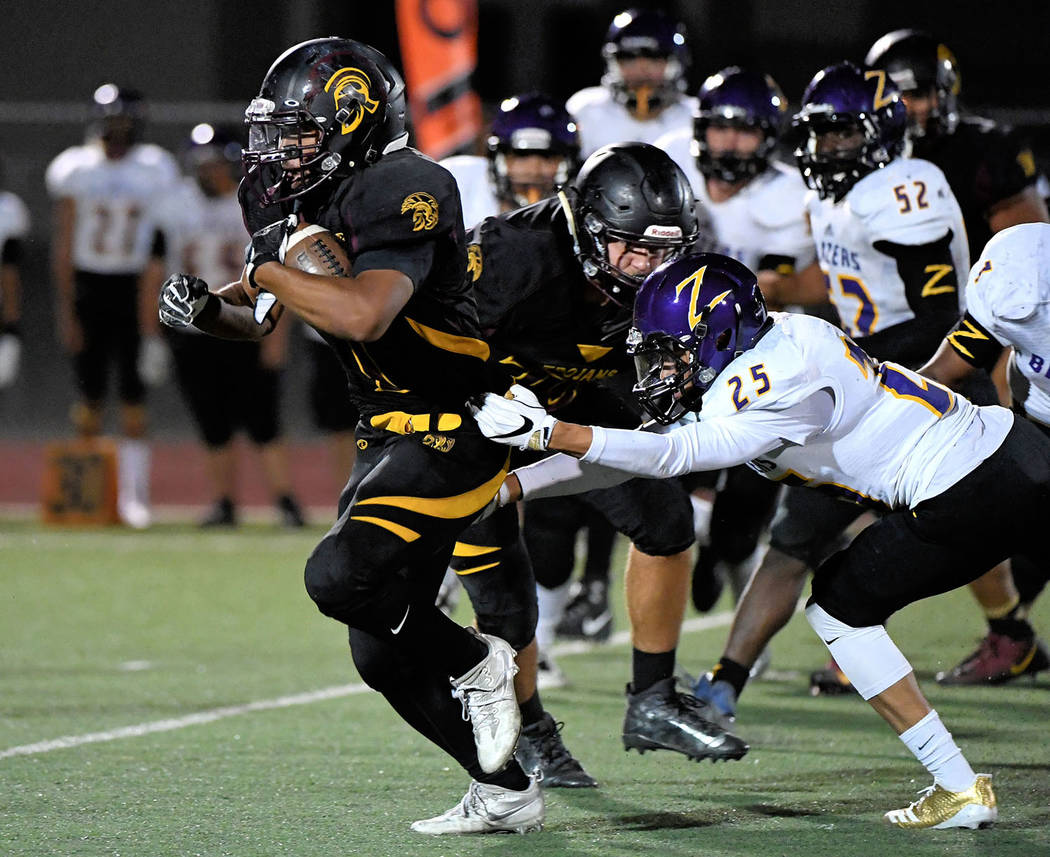 Peter Davis/Special to the Pahrump Valley Times DeAngelo Brown, shown pulling away from a Desert Pines defender last season, is Pahrump Valley's leading returning rusher after gaining 480 yards on 74 carries as a junior. 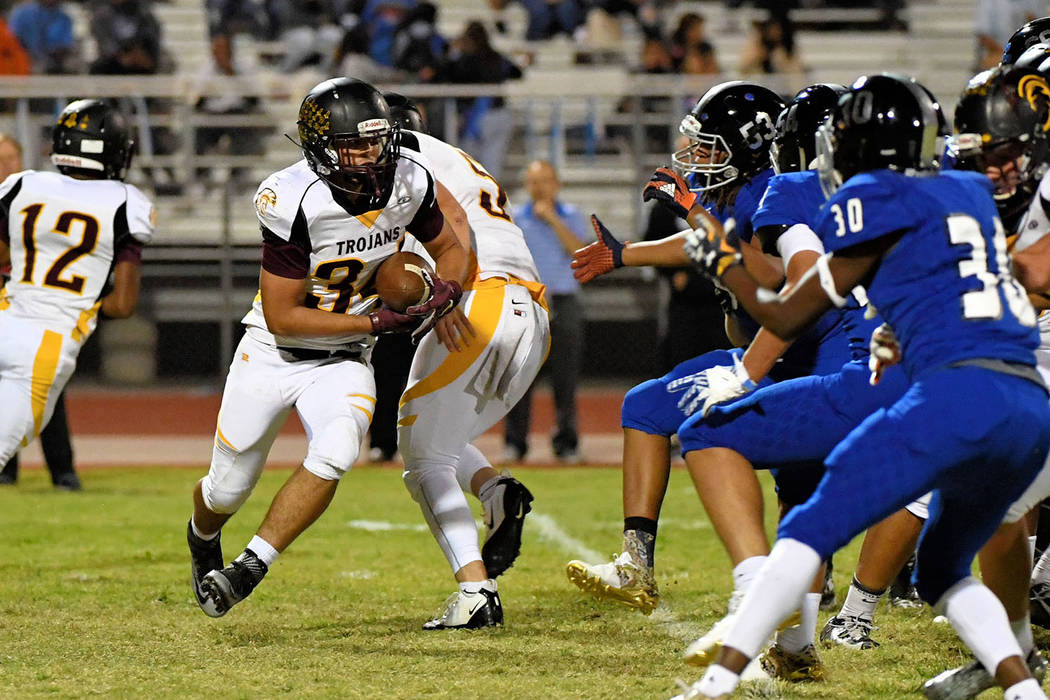 The Pahrump Valley High School football team is not switching leagues this year. It just looks that way.

And the changes could prove beneficial to the Trojans, who went 2-3 in the Class 3A Sunset League last year and 4-6 overall. All three teams the Trojans lost to in the division — Desert Pines, Sunrise Mountain and Mojave — are no longer in the division, replaced by teams — Democracy Prep, Del Sol and Valley — that went a combined 10-19 last year.

Desert Pines, which blanked Pahrump Valley 28-0 in the league opener last year, has moved up to Class 4A, as has Mojave, a 44-34 victor over the Trojans in the regular-season finale. Both will compete in the Northeast League this season.

Sunrise Mountain, which defeated the Trojans 41-6 last year, are still in Class 3A but were switched to a revamped Sunrise League, which will include Boulder City, which played as an independent a year ago, and Rancho, which is moving down to Class 3A after a winless 2017 in the Class 4A Northeast League.

The Sunset League’s newcomers arrive from three separate former homes. Valley, which was 4-6 last fall and 2-2 in the Northeast League, originally was slated to remain a Class 4A school but successfully appealed to move down to Class 3A at the spring meeting of the Nevada Interscholastic Activities Association’s Board of Control. Tech, a Class 3A school for the year just ended, was moved into Class 4A after its appeal was denied.

“That was interesting because it was basically at the last second,” Clayton said. “We were going to be a 10-team South, all one region, but Valley came back and had an argument because they said they can’t compete at the 4A level.

“We’ve scrimmaged them in the past, but again, not knowing too much about them. We’re kind of blind with those new schools coming in, but I know a few coaches who could give me some film and see what they run offensively and defensively.”

Del Sol switches over from the Sunrise League, where it went 0-3 last year on its way to a 2-8 campaign. Democracy Prep, the school formerly known as Agassi Prep, is moving up from Class 2A, where it went 4-5 overall and 4-3 in the Southern League in 2017.

“At this point, I don’t know too much about them,” Clayton said of the Knights. “I saw their record and how they played in that 2A division. And we didn’t see Del Sol last year, but I believe we played them the two previous years.”

The Trojans open the season far from home, a road game against Lowry. “We’re talking about going up there on a Thursday night because that’s a long bus ride,” Clayton said.

They will follow that trip with three games against Sunrise League teams they faced last season: Boulder City, Sunrise Mountain and Virgin Valley. Then there are five consecutive Sunset League games.

Even though the Trojans made the playoffs as a fourth seed last year, Clayton is fine with the change.

“Honestly, with it being a small league and splitting the divisions, I’m OK with that,” he said. “A lot of times that fourth seed was a team with a losing record. This for sure puts your top teams in the playoffs.”

While Clayton might need to some research to learn a bit more about the new faces on the Trojans’ schedule, Pahrump Valley’s game plan is no secret, and many of their veteran players are responsible for making the ground game work.

“Most of our experience lies in a couple of really good, solid running backs and a good, solid offensive line,” Clayton said. “And with our numbers, we’ll have seven, eight, nine guys going both offensively and defensively.”

The season opens at 7 p.m. Aug. 17 against Lowry in Winnemucca.