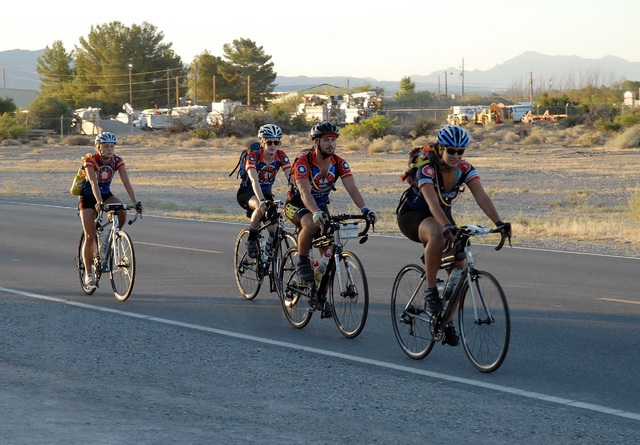 Horace Langford Jr / Pahrump Valley Times Riders from Bike and Build ride down Wilson Road on Wednesday morning on their way to Furnace Creek. Bike and Build uses rides throughout the country to raise awareness for the need of affordable housing. 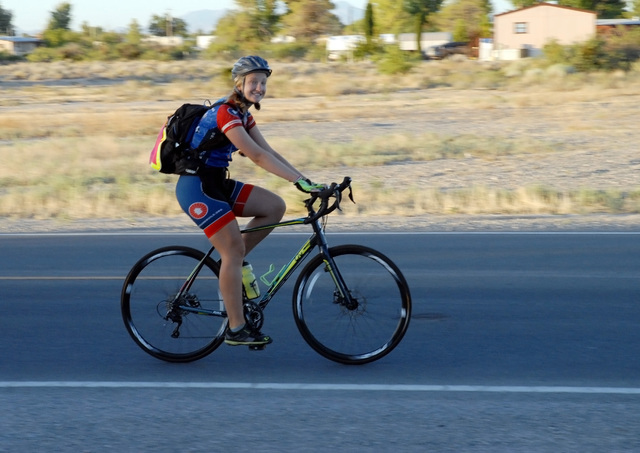 On Monday afternoon residents might have noticed an increase in the bike traffic in the town coming home from work.

The 30 young adults with Bike &Build Inc., a national nonprofit committed to affordable housing, rode into the valley on Monday. The riders are on a 4,000 mile trek from Jacksonville, Florida to Monterey, California.

While in Pahrump, the riders were hosted by NyE Communities Coalition, who provided them with a place to rest, and food. The riders then left for Furnace Creek on Wednesday morning.

Work force director of NyE Communities Coalition Tammi Odegard said that the coalition has been supporting this group for the last four years.

We provided them a place to store their equipment and fed them, she said. Then 10 volunteers in the community put the riders up for the evening.

She said the group does building projects where they could build a home or just smaller structures in the various communities where the organization is set up.

We have been supporting their efforts in hopes that someday they will come to Pahrump and build here, Odegard said.

She said the group has already done projects in the Las Vegas area. While in Pahrump, the group made a presentation to the community on their efforts at the NyECC building.

Odegard said that St. Martins Episcopal Church donated all the food for the riders while they were in town.

The cyclists, as part of the southern U.S. route, are riding to raise awareness for the need for affordable housing. We are deeply proud that Bike and Build has 300 riders this year who are so committed to the affordable housing cause that they are willing to raise much-needed funds and spend two months of their summer biking across this amazing country, Bike and Builds Senior Director of Operations and Development, Justin Villere said. Bike and Build provides the opportunity; it is the riders who make the impact on housing issues through our cycling trips.

The cyclists will be traveling and will help to build affordable housing in ten locations, including Jacksonville, New Orleans, Dallas, Santa Fe, and Las Vegas.

Villere said in order to participate in the trip, each rider raised at least $4,500 to help fund the trip costs and affordable housing efforts nationwide.

The riders undergo rigorous training prior to their trip.

Many of the riders have not ridden, Villere said. We make sure they have 500 miles under their belt. Each rider rides up to 70 miles per day and sometimes more.

Since its founding, the Philadelphia-based organization founded in 2003, has motivated over 3,000 young adult volunteers, contributed over $5.8 million and 200,000 volunteer hours to housing groups such as Habitat for Humanity and Rebuilding Together to fund projects in the United States. For more information, visit www.bikeandbuild.org or call 267-331-8488.