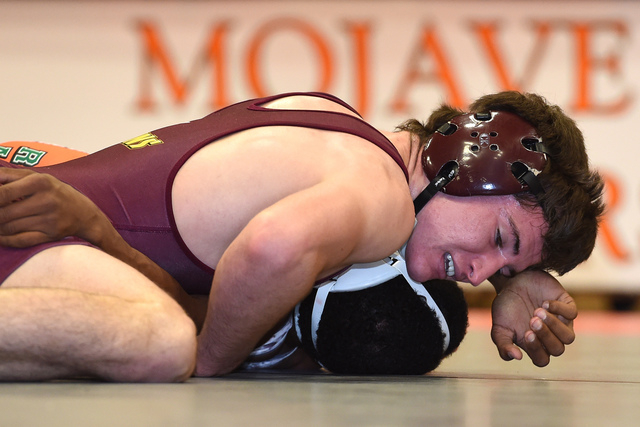 The Trojans have a long history of winning and going to state that goes back to the early days of 2000. This year the team will finish undefeated in league for the third year in a row and will send wrestlers to state. Rieger is in his 21st year coaching wrestling and he has one state title.

Once again, Rieger’s passion and desire to win at the sport has propelled his team to the top in his conference. Rieger has the ability to get his team to pull from within and to dig down deep to get the win.

Describing his passion for wrestling, Coach Rieger said wrestling was in his family and his town he grew up in. His two older brothers wrestled and he looked up to them and to the coaching staff.

For motivating the Trojan wrestlers, Rieger described putting himself in their shoes. “I did it, and I know how we did it back in the 80s, and there’s no substitute, no excuses, no substitute for hard work. And if that means a little hard work, and pain, and a grind, then that’s what it takes. I like the young boys to learn that. It’s a great lesson for the rest of your life.”

“They’re doing what it takes and our young wrestlers see it and it’s good,” he said. “I just wish every boy in the rest of the school could see it. They’re great examples of hard work and I wish every boy came out to see what hard work will do for you. They’re good role models—they’re tough boys.”

On improvement of the wrestlers, Coach Rieger believes there’s a lot deeper competition.

“Every team has good lower and middle weights, and our lower-middle weights just have to step it up because there’s tough competition there, and we’re right in the middle of it,” the coach said. “But we want to be on top of it. They need to peak at the right time—right at the end of the season, just the right time. We want to be tenacious, to go out there and wrestle the Trojan way—and that’s going forward and going hard.”

Indeed, Coach Rieger’s words of how he coaches played out in his wrestlers’ own words. All of the wrestlers interviewed spoke of being trained to go hard and never give in, to never quit. (They were all interviewed on the long bus ride up to the Spring Creek Invitational which was held on Jan. 16. In that meet, the Trojans placed second in a 29-team field).

Jax Clayton, a senior at 195 pounds, placed first in his weight class at the Spring Creek Invitational. When asked how Coach Rieger helped him advance this season, Jax answered, “Coach Rieger has helped me this season by providing me a strong foundation in wrestling, providing me with excellent cardio workouts, and a great work ethic.”

He said Rieger has pushed him to work harder from the bottom and this is the area he’s seen the most improvement in. When asked how wrestling has benefited him the most, Jax said, “It made me a harder worker, it gave me a good work ethic and more determination.” Jax said his teammates have taught him moves, and some have taught him to work harder. He said his words of advice to younger wrestlers would be to “stick with it. It gets easier with more time and experience and you don’t get picked on as much.”

Jeremy Coates, a senior at 220 pounds, placed second in his weight class at the invitational. He said Coach Rieger “has made me mentally and physically tougher. He’s really getting our heads into it.” Concerning being pushed by Coach Rieger to excel, Coates said, “I’ve improved most in my conditioning. My conditioning has gotten a lot better this season.” Concerning overcoming any weakness in wrestling, Coates said, “Again, that would be my conditioning. Before, I might get tired in the second round, but now, if I must go the whole round, I feel good at the end — I don’t feel like I’m going to die at the end of three rounds.” Coates said he’s benefited greatly this wrestling season by anticipating how his opponent is going to move on the bottom, which way he’s going to move.”

Samuel Tucsnak, a senior at 170 pounds, placed fourth in his weight class. He said Coach Rieger has helped him advance this season.

“He’s pushed me the hardest in my conditioning,” Tucsnak said. In his area of greatest improvement this season he said, “It’s my shot, my double-leg takedown. My teammates push me every day, they push my conditioning.” For words of advice to his younger teammates, Tucsnak stated emphatically, “Never give up. Don’t stop. You can’t think about quitting, you’ve got to keep going. It’s a grind but you’ve got to keep going. It’ll all pay off in the end.”

Jonathan Corrow, a senior at 182 pounds, placed fourth in his weight class. He said Coach Rieger “has helped me by pushing me to work harder, to get my cardio working better. That’s about it. Work harder.” Corrow commented he’s improved most in his strength.

“I was weaker but have gotten much stronger, and have strengthened my back,” he said. About what he’s learned from his teammates, Corrow said he has learned to move on from mistakes and losses, and not to dwell on them. He said he would advise his younger teammates “to work as hard as they can and to never give up.”