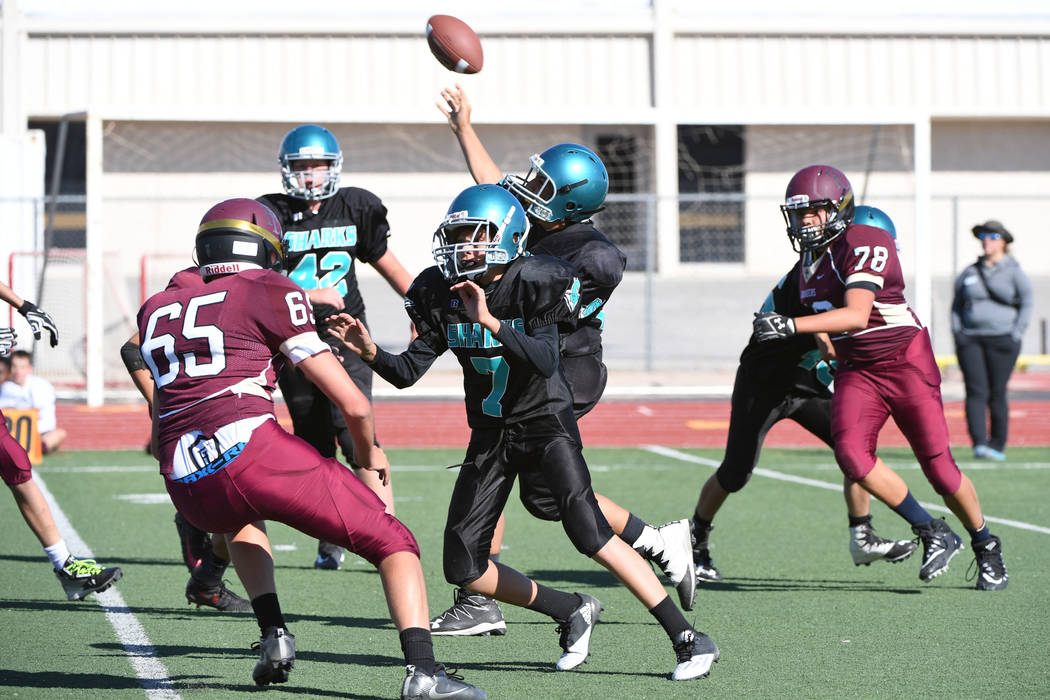 Peter Davis/Special to the Pahrump Valley Times Quarterback Roman Roberts passes the ball downfield for the Sharks. The team had problems both passing and rushing the ball. 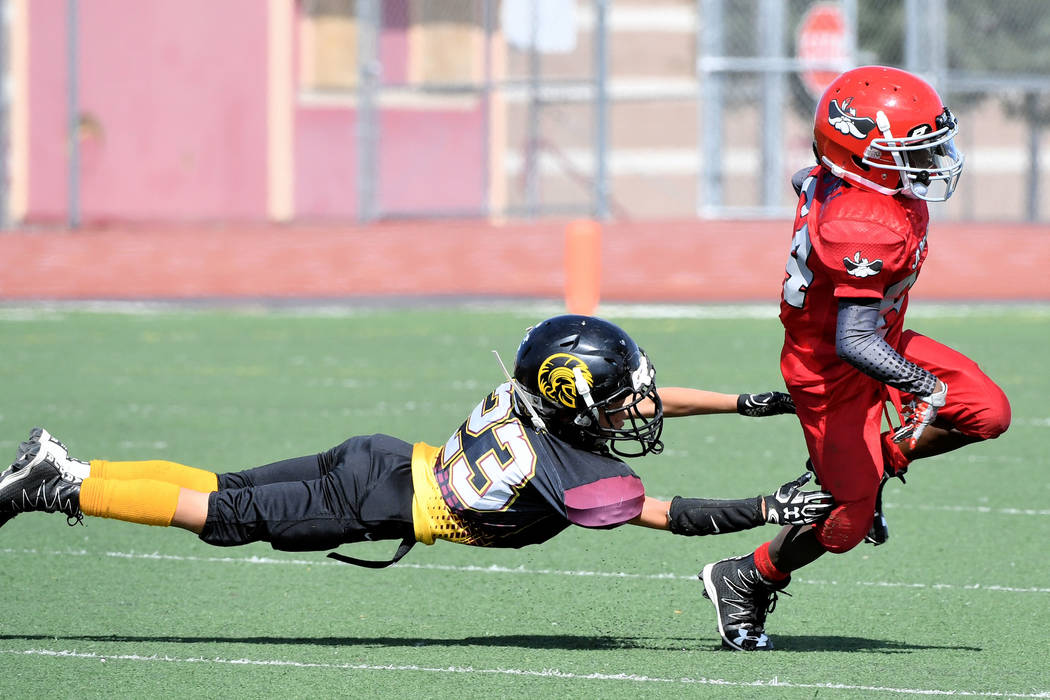 Peter Davis/Special to the Pahrump Valley Times This is a funny way to catch a ride. But in all seriousness, Cade Wulfenstein made this tackle for his 9U team. 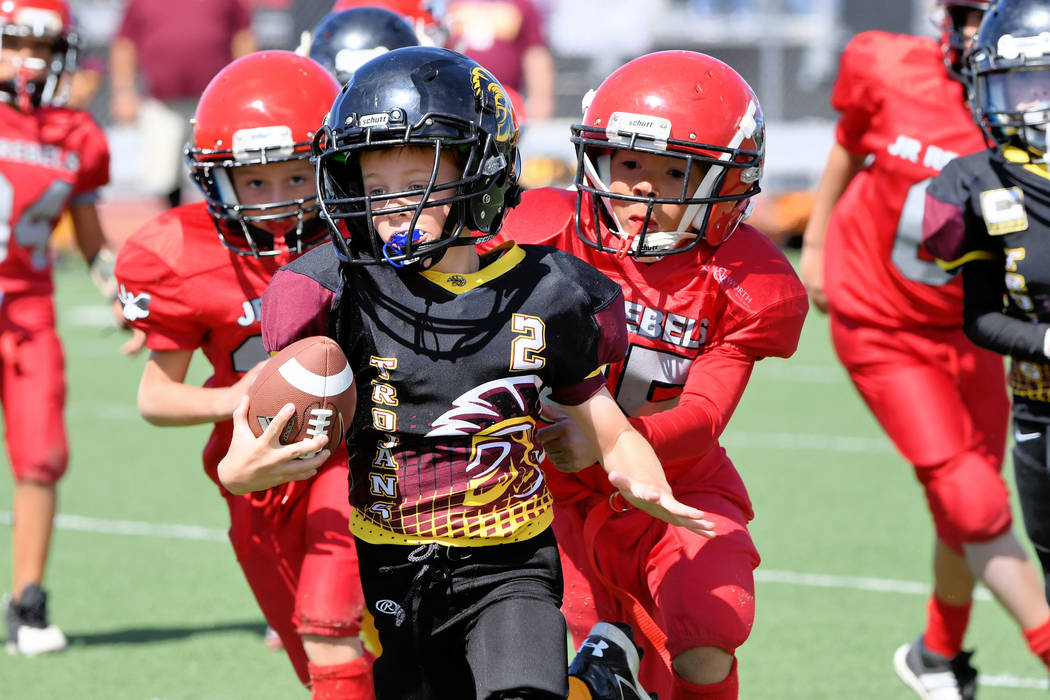 Peter Davis/Special to the Pahrump Valley Times Paul Walker, 9U Trojans, runs with the ball toward the end zone with the whole team after him. 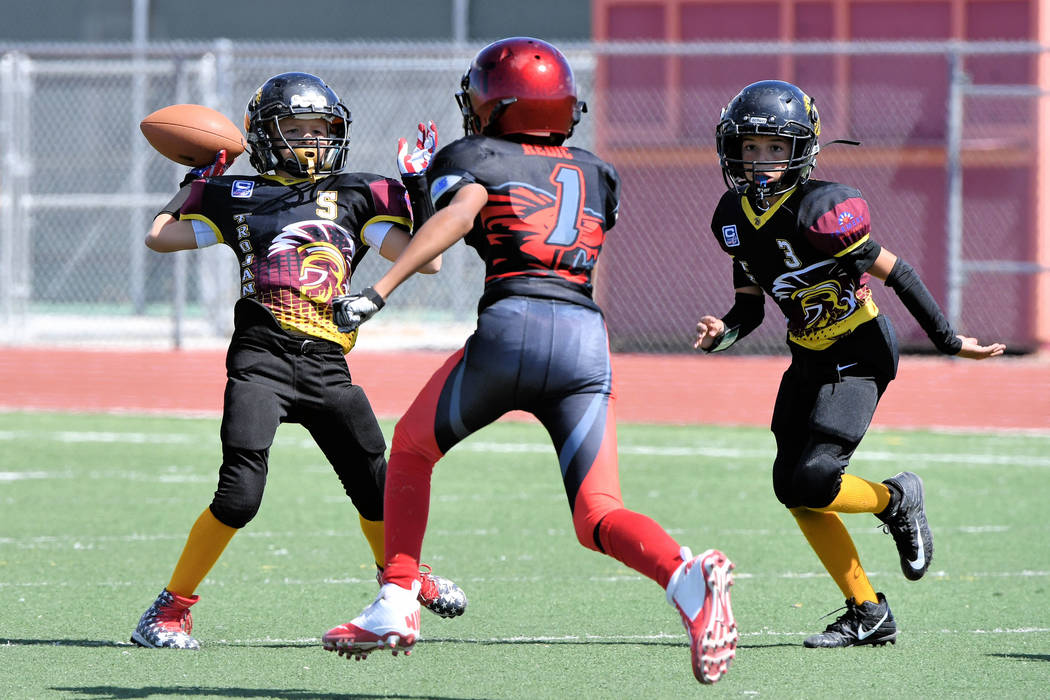 Peter Davis/Special to the Pahrump Valley Times Gunner Cortez, 11U Trojans, with the ball as he looks for a receiver downfield.

This year, Rosemary Clarke Middle School is in the National Youth Sports League in the 14 and under division (14U).

The team had a bad day on Saturday against visiting Faith Lutheran as they lost 35-0, according to coach Jimmy Atencio, the head football coach.

“We had problems passing and rushing on offense against Faith Lutheran,” Atencio said.

The coach said his team has four games left and he wants them to come out and play hard the entire four quarters.

He said the following players in the last game deserve recognition: Nicholas Diaz for four sacks he had during the game, Jacob Rhodes for catching at least five passes, Robert Simms for two sacks and eight to nine tackles.

Atencio believes he has a good team.

“We do well on the practice field and we should have beaten Faith in the last game,” the coach said. “If you don’t come out to play then you can’t win.”

Other NYS teams from Pahrump

The youth football roundup is provided by Johnny O’Neal, president of the Pahrump NYS.

The flag teams were away in Henderson. The league doesn’t officially keep score in 6U flag, but everyone there is taking notice of the three Jr. Trojan squads, which is exciting for the future of the program.

The Trojan Sword team, coached by Scott Brown, got it going early and often against the Rumble Bees. Trojan Shield played against Trojan Spear and both squads had a great time.

The three tackle teams hosted their first home games of the season at Pahrump Valley High School on Saturday. The 9U team got a victory over the Southern Highland Jr. Rebels 32-6.

The 11U Jr. Trojans faced off against the TMT Red Lions. This was a hard-fought battle with hard hitting from both teams. After a 0-0 deadlock at the half, the Trojans came out on top with a bruising 18-7 victory.

After riding high last weekend, the young 13U Jr. Trojans took on the Faith Lutheran Jr. Crusaders in a lopsided 42-6 loss. The lone score coming by Scott Oscarson late in the game. Again, big hits delivered by both teams.

The Warriors won their first home game of the season. 26-0 over the Spring Valley Jr. Grizzlies. This team is undefeated, 3-0. The Warriors have scored 72 points, allowing seven in their first three games. The next game is on the road at Faith Lutheran High School vs. the Boulder City Eagles.

Contact sports editor Vern Hee at vhee@pvtimes.com Note: The sports editor tries to get as much youth sports in as possible, which depends on space available.