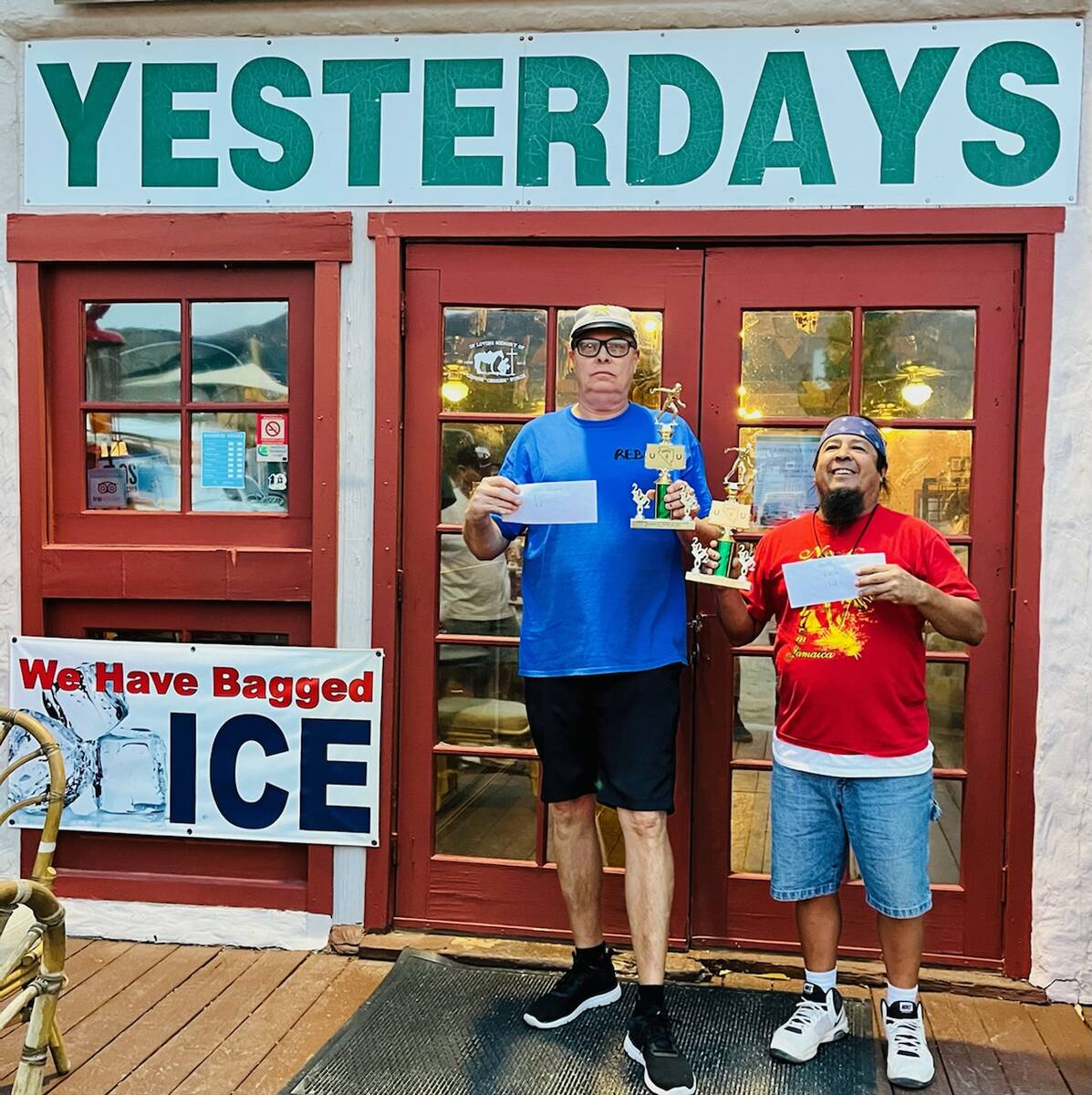 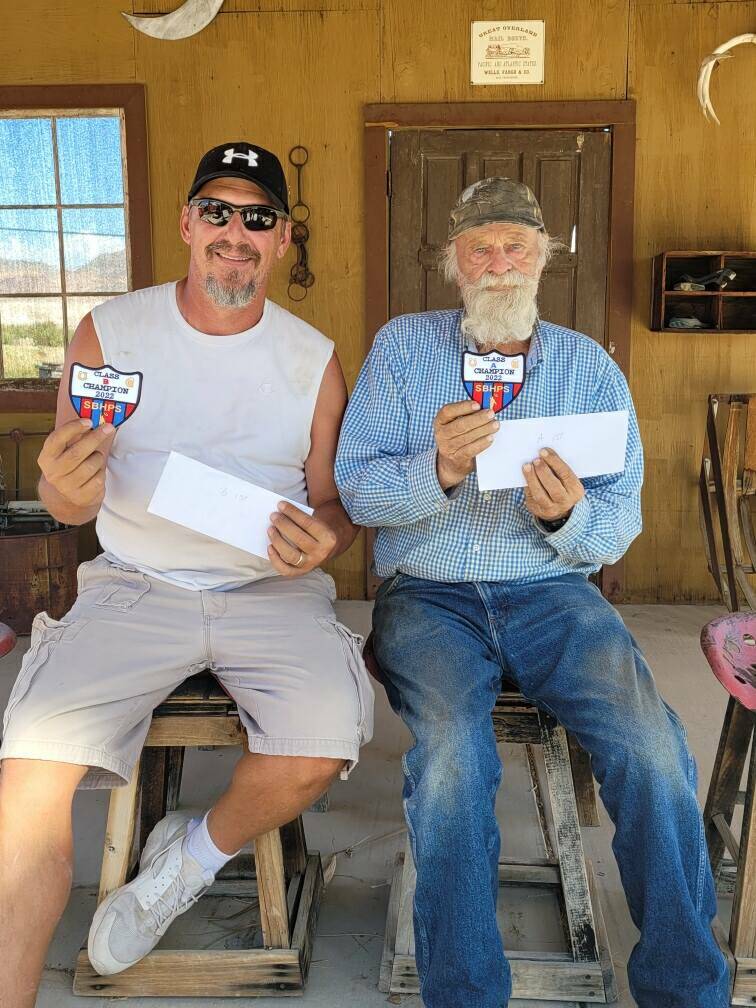 Special to Pahrump Valley Times The team of Heath Russell (left) and Lawrence Workman (right) finished with a perfect 3-0 record at the Shoes & Brews series event in Shoshone, California on Sunday, Oct. 16, 2022. 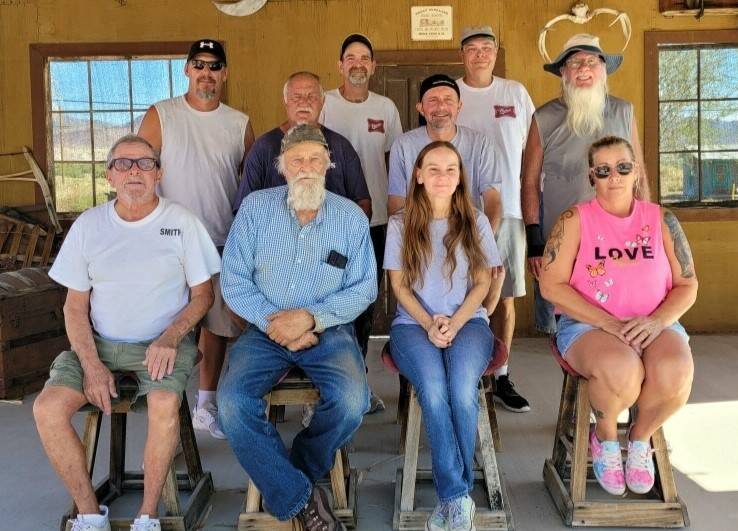 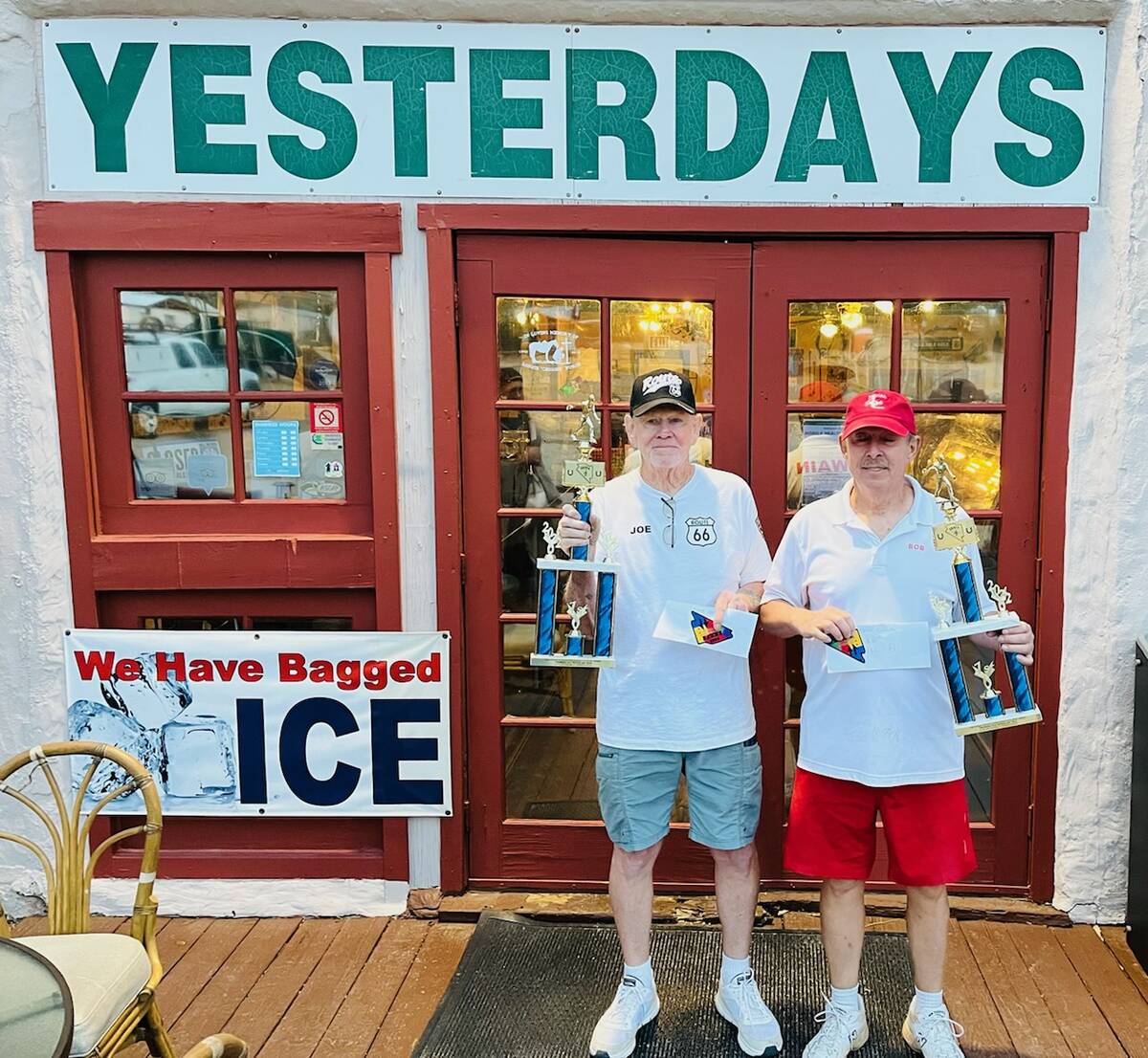 Special to Pahrump Valley Times The team of Bob Swain (left) and Joe Hogue (right) finished in first place at the SNHPS tournament in Chloride, Arizona on Saturday, Oct. 15, 2022. 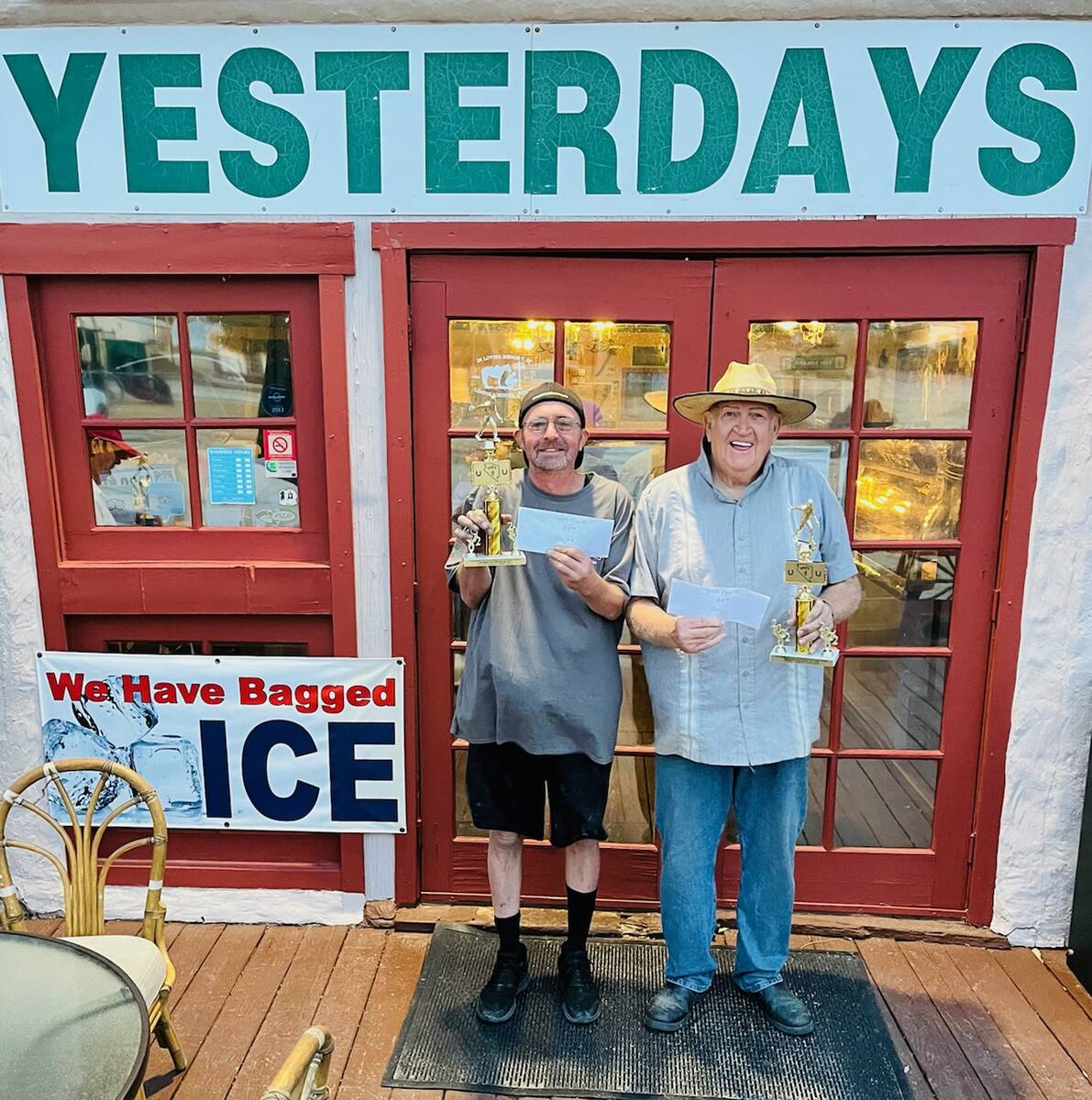 Special to Pahrump Valley Times The team of Larry Workman (right) and Dennis Anderson (left) finished in second place at the SNHPS tournament in Chloride, Arizona. 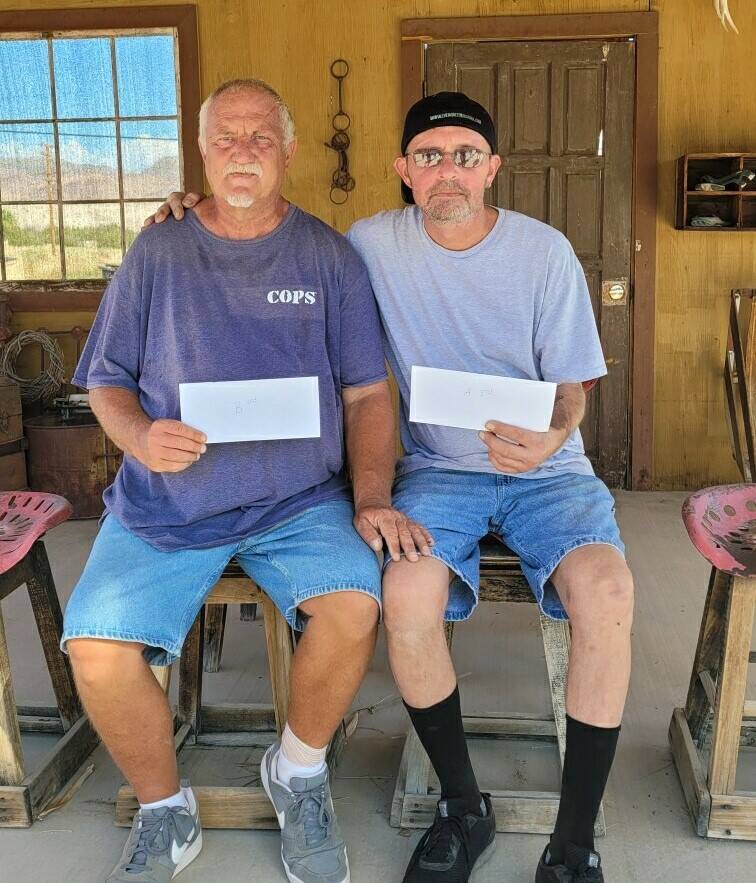 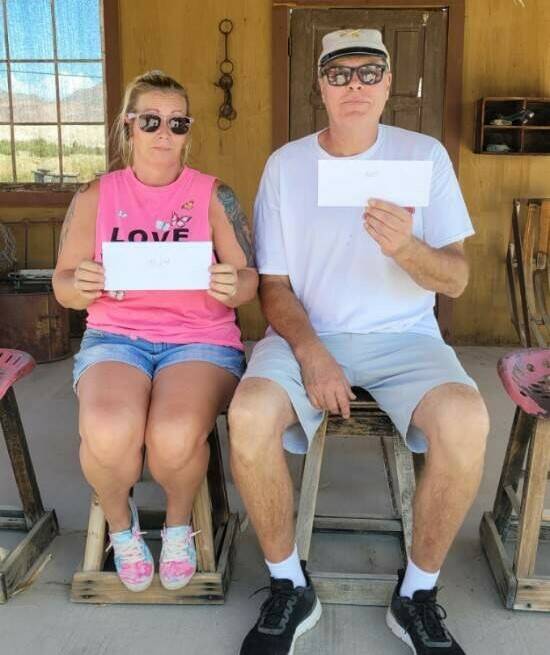 Horseshoes were flying around the Southwest last weekend as the Shoes & Brews series continued in Shoshone, California and the Southern Nevada Horseshoe Pitching Series headed to Chloride, Arizona.

The SNHPS kicked off last weekend’s events with a double elimination-doubles tournament at the Chloride Old Miners Day down in Arizona.

Twelve pitchers participated in the tournament, splitting into six teams.

The team of Bob Swain from Bullhead City, Arizona and Joe Hogue from Kingman, Arizona took home the first-place position in the SNHPS non-sanctioned event.

The pair were the surprise of the day, finishing with an overall record of 6-1. Their only loss came in the second game of the tournament against the team they would later face for the championship, Larry Workman and Dennis Anderson.

Because their first loss was in the opening game of the tournament, Swain and Hogue had to win three matches in a row just to make it to the championship round, otherwise they would have been knocked out of the event.

Swain threw a total of 76 ringers during the event and Hogue threw 19 ringers of his own.

In second place of the Chloride Miners Day tournament was the team of Larry Workman from Henderson, Nevada and Dennis Anderson from Pahrump, Nevada.

Workman and Anderson finished with a 2-2 record, going 2-0 before reaching the championship round. The two had beaten the championship winning team earlier in the tournament, but weren’t able to put everything together in the final two games of the day.

Anderson finished the tournament with 36 ringers, while Workman ended his day with just five ringers.

In third place of the SNHPS tournament was the duo of Lathan Dilger from Pahrump and Steve Ochoa from Havasu Lake, California.

Dilger threw 33 ringers over the course of the event and Ochoa was right there with him with 27 ringers of his own.

Each of the top three teams received a cash prize to go along with a trophy. The champions, Swain and Hogue, also received a tournament champion patch to take home.

On Sunday, the Shoes & Brews Horseshoe Pitching Series continued after taking the last four weeks off.

The Crowbar Cafe & Saloon in Shoshone, California was the site of the doubles tournament.

Eight pitchers signed up for the tournament, making four full teams in participation.

Each team contains an A division and a B division player. The top three teams are awarded points toward their season total, which will dictate the season champions following the final tournament.

In first place of the SBHPS event was the team of Lawrence Workman and Heath Russell. The pair finished as the only undefeated team in the tournament, going a perfect 3-0.

For their first-place finish, each pitcher received a tournament champion patch, a cash prize and the very important 10 first-place points toward their season standings.

In second place in the doubles event was the team of Lathan Dilger and Christy Russell. They ended their day with a 2-1 record, with the only loss coming to Workman and Russell.

Dilger and Russell each received a cash prize and five points toward their season standings.

In the third and final spot of the tournament was the team of Larry Workman and Mike Dedeic.

Workman and Dedeic finished with an overall record of 1-2, with their only win coming against the team of Don Brown and Danielle Workman.

For their third-place finish, Workman and Dedeic each received three points toward their season standings, along with a cash prize.

Only two more tournaments remain in the Shoes & Brews series this season. The next event will be played at Roadhouse 95 Bar & Grill on Main Street in Beatty. That tournament will take place on Friday, Oct. 28.

The next horseshoe tournament will be this Saturday, Oct. 22, in Pahrump for the Best of the West event. This will be a Nevada State Horseshoe Pitching Association sanctioned tournament beginning at 10 a.m.