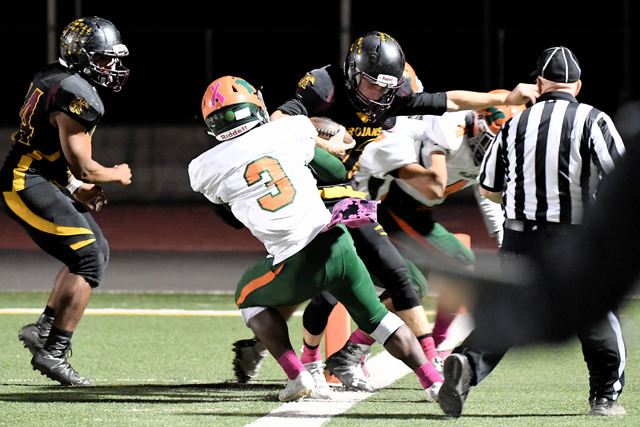 Peter Davis / special to the Pahrump Valley Times Drew Walker is stopped on the one-yard line after a 35-yard carry in the fourth quarter. On the next play Aaron Fuentes scored the touchdown for Pahrump's last score of the game. 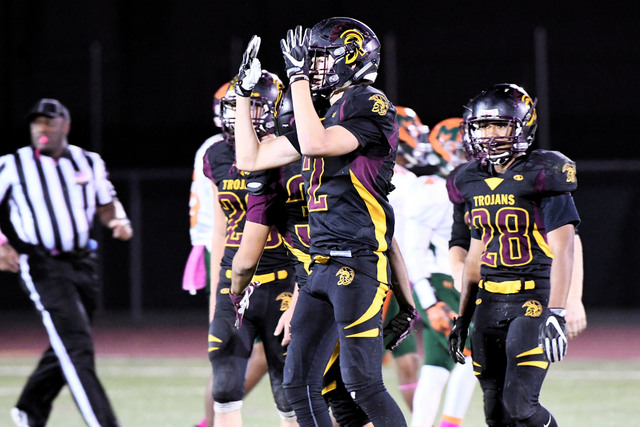 Peter Davis / Special to the Pahrump Valley Times Cory Bergan celebrates after one of his four interceptions in the game. Bergans efforts was key in allowing the Trojans offense to get into a rythm.

The Trojans defense made a statement last Friday by keeping Mojave off balance the entire game. Junior Cory Bergan played a key role in that defense and had four interceptions and a pick-six to help lead Pahrump Valley to a 30-8 win over Mojave on Friday.

The win clinches the first winning season for the Trojans (6-3 overall, 3-2 Sunset League) since 1995. The win also secured the No. 3 seed in the Sunset League for Pahrump, which will travel to Moapa Valley (6-3, 3-1) on Thursday in the first round of Class 3A playoffs.

All season long the offensive running game has gotten the credit for the wins and this game the defense stepped up and was recognized.

Trojans coach Joe Clayton said it took a bit to get his offense going.

“Like tonight was a little rough game, we started pretty sloppy and they were extremely sloppy,” Clayton said. “Because they are so sloppy, other teams can’t get into a rhythm and that’s why they are so close (to opponents in points).”

While the offense was slow to get started, the defense put the screws to Mojave early on in the game and allowed the offense to get going. Bergan had two interceptions in the first half.

Bergan said it was his speed that got him to the ball.

“I have enough speed and I like to watch their QB’s eyes a lot and I go where he goes,” Bergan said. “We are ready (for next week).”

The Trojans also shut down the run and allowed just 31-yards rushing in the first half and in the second half the run was kept to less than 20 yards. Mojave finally scored on a 43-yard TD reception.

“We did pretty good on defense,” Fuentes said. “We stayed in our line. We have been focusing on trying not to go upfield on the line. It was fun. Playoffs man!”

Pahrump owned the second half and that’s where the offense excelled by wearing the other team down.

“We came back and pounded it in their face in the second half,” Clayton said. “We run the ball and we know we can run the ball. Our front line we have trusted in them all year. Every team we played in the second half gets sick of getting pounded. We start off a little slow in the first half, but we just wear them down and that’s what we mean by tenderizing.”

Clayton attributed a lot of that success to the offensive line for making the holes.

“We are big and solid and they play really well together and they have a toughness about them,” the coach said. “Really, they enjoy playing with each other. These guys have good footwork. Coach Schmidt spends a lot of time with their footwork. That plays a part in the first steps off of the ball.”

Running back Fuentes had nothing but praise for the Trojans front line.

“I am stoked on the line this year,” Fuentes said. “Especially this game. We really came together. Everyone was blocking crisp and clean. It was real good. All I had to do was run.”

Sophomore running back Nico Velazquez led the Trojans in rushing with 85 yards; senior Drew Walker had 72; and Fuentes had 67 for a total of 224 yards.

Pahrump had a good initial 64-yard drive that ate up a good seven minutes off the clock, but a delay of game penalty killed this drive and Joey Sladek missed the field goal.

The Trojans came back on the second possession with a score, on a punt return by Velazquez who ran the ball from midfield to the Mojave seven-yard line. Pahrump then took four downs to score and on fourth and goal, QB Parker Hart took it in on a keeper. The extra point was no good and this was the only TD for the Trojans for the half.

Bergan had two of his interceptions in the second quarter that kept Mojave from threatening.

On Mojave’s first drive of the second half Bergan got his pick-six on third and 30 to make it 13-0; the kick was good.

On the Rattlers’ second series they threw another interception which was intercepted by senior defensive back Jessie Dillon. Pahrump would only score another field goal, so by the end of the third the score was 16-0.

Mojave started with the ball at the beginning of the fourth and that’s when Bergan came up with his fourth interception. This resulted in another Trojans TD as they drove the ball from midfield to the goal line, where senior running back Case Murphy scored on a three-yard run.

Mojave then scored their first touchdown to make the score 23-6 on a 30-yard TD reception.

Mojave tried an onside kick, but the Trojans recovered on their own 44-yard line with 2:59 left to play. It took the Trojans eight plays to run the ball into the end zone.

Fuentes scored the last TD on a one-yard run to make the score 29-8. The extra point made it 30 and this was the final score of the game.