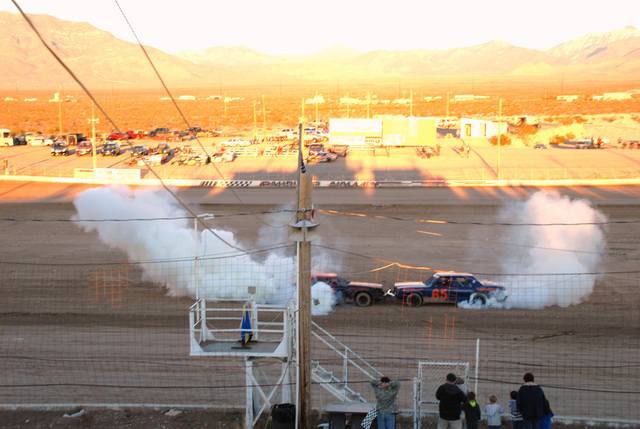 After being rained out on Nov. 23, the last race of the Pahrump Valley Speedway’s season on Nov. 30 was a spectacle of new and experienced drivers with some out there to get experience, and some veterans there to just enjoy the last local dirt race of the year.

The day was great for racing with ideal conditions on the track and with twenty-seven racers across six car-types with all but five finishing. Eight drivers went out during the race, three of those left the field to make repairs and re-entered to finish.

It was a typical kind of last race for the end of the season according to J.J. Nunn, a Las Vegas Bombers driver. “It was a great race day and lot of fun,” he said.

During the day, four cars actually smoked out due to engine troubles, but two Bomber racers, Gary Wyatt and J.J. Nunn, put their cars nose to nose at the end of the last race and revved their tires to make smoky plumes rise past the electric lines for the enjoyment of the kids and to acknowledge the end of the season. Wyatt came in first and Nunn second in the Bombers’ race.

There were also notable first time women racers at the last race of the season. Jeri Patrick, who will turn 70 next year, said, this was her first race. She came in third in the Coupes and plans on making a lot of return trips.

“If I do well, I plan on making a comeback,” she said before the race. Her daughter, Susan Smotherman, has won the Mini-Stock championship and also plans to be back in the Spring.

During the Mini-Stock race, Lisa Park, 16 years old, turned sharply and rolled her Mini-Stock, but it landed on all four tires. She ran out onto the track with her arms in the air to let everyone know she was unharmed.

Drivers started having problems in the late afternoon. In the WCSS race, Justin Kramer was in a bold-second place when he smoked off the track but still managed a return to fourth place out of five drivers. In that same race, Tristan Wedmore, second place, and Mason Wabsis, third place, ran their first races ever in good shape. Steve Nash was the winner of that race.

Announcer Michael Brown felt he knew the reason for the problems in the afternoon. He said it was due to the track starting to dry out. Indeed, the track did start to become rutted on the outside in the late afternoon but it didn’t stop most of the drivers from running good races. One car went out for a flat tire, and another for brake fluid in the IMCA race, but they came back to finish.

Brown is also a musician who used to play backup with the Sha Na Na band, and brought his guitar to play the Star Spangled Banner sung by Bobby Hudson, on tour with Lil’ Elmo and the Cosmos. They play at the Pahrump Nugget periodically.