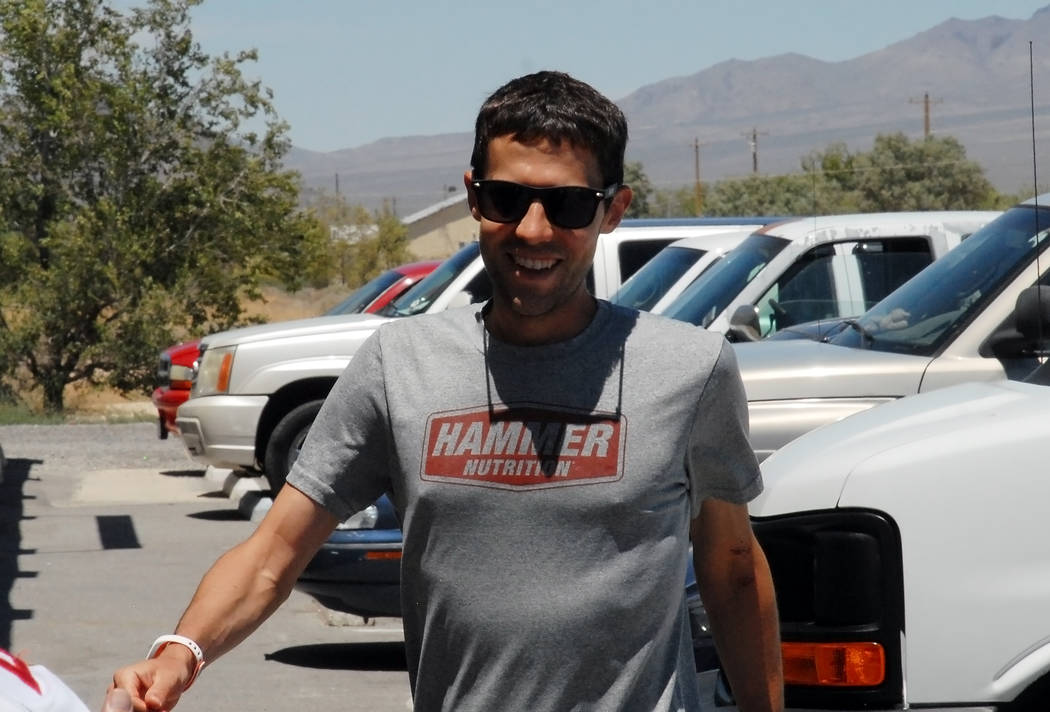 It’s go time for Pete Kostelnick, a Badwater runner who already has two wins under his belt and he really wants the third one badly.

Kostelnick is a two-time winner of the STYR Labs Badwater 135 Ultramarathon and on July 10 in Death Valley, he should be heavily favored to win again, barring any injuries.

Kostelnick currently holds the all-time record for completing the course, which makes him a tough competitor and race favorite. He finished last year’s race in 21 hours, 56 minutes and 32 seconds, which was two hours before any other competitor. He joins a unique club that has finished the race under 24 hours. According to race organizer Chris Kostman, there are fourteen sub-24-hour finishers.

In addition to that, Kostelnick also has beaten the transcontinental record for running across the United States at 42 days, breaking the old record by four days. With all these accolades, what keeps Kostelnick running Badwater?

“He is in a whole different class of runner,” Dave Krupski, a veteran of the race said.

“To run this race you have to have the heart,” Kostelnick said. “For me, it’s an annual thing. I really want to do this every year and stay committed. I don’t want to take a year off. This year’s race will be hard and the Badwater truly takes a lot out of you. There is pain involved, but my goal is to go as fast as I can. I want to go and compete and I want to do more than just finish.”

People don’t realize that 135 miles is a long race through an already hostile course, so although favored, he still has to run the course. Just because he has won twice doesn’t mean nature will let him win a third time. In addition, he will be racing just eight days before the race in Ireland, which will also complicate things for him.

“This year Harvey Lewis and I will be coming off the 24-hour World Championships in Belfast, Ireland,” Kostelnick said. “I will have eight days to recover from that and then run the Badwater 135. I could get injured in that race too. Yes, I could take a break and not run Badwater this year, but really I have the number one bid this year, and that’s hard to pass up. The thing with racing the 24-hour race is that I could injure myself there.”

Kostelnick believes in training hard for any competition. He shed some light on how hard he trains for Badwater.

“When you are well trained, 70 percent of your training is mileage-driven,” he said. “I focus on the heat training in the last two to three weeks before the race and how I do that is I by running in the heat of the day. In Missouri, it works out well for me here because it starts to get hot, humid and miserable in the summer.”

Kostelnick doesn’t do any other heat training, which varies from runner to runner. Some runners run with layers of jackets and others put a treadmill in a sauna.

“Heat is dangerous and being physically fit is the best way to handle the heat,” Kostelnick said.

His training consists of 200 miles per week, most of that being on a treadmill.

No stomach problems for Pete

Many of the runners that run the event for the first time have problems digesting food. Badwater at the most, is a 48-hour race and that requires the body to take on nutrients. Solving the nutrient problem is a mystery or at least a headache for many of the runners, but Kostelnick hasn’t had a problem. He said he had no stomach issues last year.

“I can eat almost anything normally and have not had any stomach issues,” the superhuman runner said. “I attribute that to all the mileage that I have done. I think I can eat a steak dinner while running this race. I started to figure all this out with nutrition after the 2015 Badwater. I feel I have trained my body to do this.”

Why he runs so well in the heat he said all goes back to his training.

“There are very few runners that have progressed like me,” Kostelnick said. “I am like an anomaly that is hard to replicate. I think the results speak for themselves for putting in the mileage. There is not much science behind it, because so few do what I do. Finding a person that runs a 200-mile week is rare. There just isn’t enough data.”