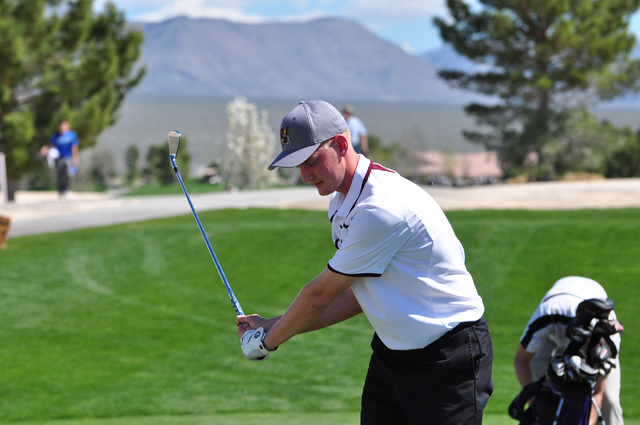 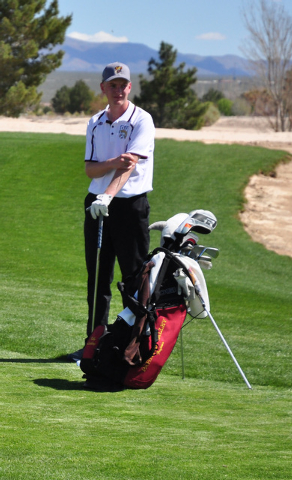 At 6 foot 2 inches tall and 205 pounds, junior Kelby Lindberg is one of the biggest golfers the team has. He made the varsity team for the second year in a row and is one of six golfers that the team will feature at its tournaments.

Trojans Coach Bob Hopkins says Lindberg is playing because he is one of the hardest workers in practice.

“On the golf course Kelby is an intense and fiery player on the inside,” the coach said. “Kelby can shoot in the low 80’s if he gets his driver under control and works on his wedge game.”

Kelby carded a 91 on the first day of the Pahrump Valley Invitational and a 101 on the second day two weeks ago.

“The second day I had a hard time getting off the tee and I was plagued with penalties,” Lindberg said.

Hopkins says Lindberg is a quiet person but fun to be around.

“He has a great sense of humor that a lot of people don’t see,” Hopkins said. “On the outside he is calm and a lot of fun to play with.”

He said it’s kind of hard playing three sports because you have to stay dedicated to the sport you are playing.

“You have to have respect for your teammates,” Lindberg said. “If you are going to go out and you get hurt doing another sport then that’s unfair to your other teammates.”

This does not mean he doesn’t golf during the off-season. During the golf off-season, he tries to pick up a club every day even if he can’t go to the course because practice is important to golfing well.

He says one has to practice to maintain an edge in the sport.

“I swing a club to get the feel for it and that’s a daily routine for that and I will go out in the yard and hit some balls,” he said.

Out of the three sports he said golf is his favorite sport. Lindberg says he likes the challenge of golfing.

“The hardest thing about the sport is having a consistent round,” he said. “You are up against the elements in golf. It could be windy, rainy or a perfect day. All three of those decide how well you will play.”

In addition, Lindberg believes there are other challenges to golf.

“It is not a game about physicality but more of a mental game,” he said. “You’re using your head to get around obstacles. Golf is 90 percent mentality and 10 percent physicality.”

He said over-thinking a shot happens too and a big part of the game is blocking out distractions and the poor shots made during a match. Lindberg basically says golf must be taken one shot at a time.

“If you can’t block things out, you will have a bad round of golf,” he said.

Lindberg said when he was six, his father, Kyle Lindberg, started him out in the sport and he started competitive golf once he got into middle school.

Kelby Lindberg is working hard to get what golfers call the short game down. This aspect of golf is the putting and chipping.

He knows if he can get the short game down the rest will follow. He says his short game is getting to the point where a three putt situation is rare.

“If I get rid of the three putts and the penalty shots then my score will come down,” he said.

When he feels the pressure, he tells himself at each hole to hit a well-rounded shot right down the middle.

Coming from a sports oriented family has helped out.

He said his father played sports so he wants to play and do as well as he did or better.

“I didn’t know too much about my father’s high school days,” Kelby Lindberg said. “But now that I play sports he gives me advice.”

Along with the family his strong faith in God gets him through sports and through school.

He says he is strong in the Christian faith and has been going to Pahrump Community Church his whole life.

The church has been a huge influence on his life and he looks forward to doing something each week with his church.

Living up to what you believe in is important to him. Before every game he says a little prayer in his head.

“I just pray for a well-rounded game,” Kelby said. “I know Jesus is the Lord and Savior and that anything through him is possible. I try to lead a good example for whatever I do. I try to be a role model. I tell myself, ‘I am not going to get angry, I am not going to swear and throw clubs. I am just going to hit another shot and do better next time.’”

His goal this year is to qualify for regionals and then hopefully state.

At this point he is not sure of what he is going to do in college. He will not be playing sports. He is still trying to figure out the career he wants to go into. He is thinking of attending the University of Nevada, Reno or the University of Illinois.