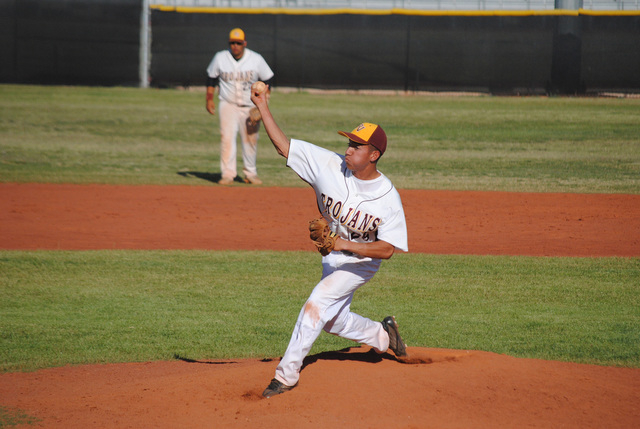 AJ Segura hit a inside-the-park home run but the Trojans came up short by 2 runs in the 9-7 loss that ended their drive to state last Thursday.

Pahrump finishes the season 21-10-1 overall and 6-2 in conference. The Trojans end a great season, where their pitching really advanced to a new level.

Trojans pitching, according to Trojans Coach Brian Hayes, was much better this year than in years past. He had said last year going into tournaments like the regional tourney taxed his pitching staff.

The staff last year didn’t have enough experience and got into trouble early. Last year’s pitchers gave up too many base on balls. He felt the season was highly successful despite not reaching his ultimate goal.

“Although we did not reach our team goal, which was to finish top 2 in league and win at least 2 playoff games, it was still a successful season. We went from 14 wins and 0 playoff losses to 21 wins and 1 playoff win. Our senior group put our program in position to be competitive in years to come and we thank them for that,” Hayes said.

The Trojans also improved in their hitting. This year in the three playoff games the Trojans hit .320 against Tech, .306 against Chaparral and .310 against Mojave.

Dylan Ault led the hitting among the starters with a .443 batting average and he also led the team in RBIs with 34. He also had 3 home runs.

Chad Uyeno was the second best hitter with a .412 average, 33 RBIs and 4 home runs. Cody Kovatch and Josh “Yoshi” Mortensen finished 3rd with .393 average. Kovatch had 16 RBIs and Yoshi had 19.

Overall the Trojans were a team that put pressure on the opposition by constantly moving on the base pads. This year the Trojans had 136 stolen bases. Yoshi lead the team in base stealing with 46 stolen bases on the year.

Yoshi was one of those players that would get on base and would steal his way to third. This often led to at least a run if Yoshi got on. AJ Segura was the next best base stealer with 21 bases stolen.

Another big improvement according to Hayes, was the defense. The team was able to keep other teams at bay with excellent defense. The Trojans finished the year with .92 fielding percentage, which means less errors per game.

Last year the Trojans started the year off averaging 10 errors a game.

This drastically improved this year starting with 5 and has the season progressed the team averaged 2 errors per game in the last 21 games.

The Trojans do have Ault and Yoshi returning along with numerous other promising young talent. Hayes believes his team will be successful if the kids are willing to work hard this summer.

“We start summer baseball soon and hope that our current varsity players can make the commitment to further the success of our program. One of the reasons for our success this season was because the vast majority of our players played summer ball,” he said.

The summer program will consist of the silver American Legion team and the Coaches’ League team.

The Silver team will consist of the varsity team for next year and will give our returning varsity players an opportunity to play with and help mold the younger guys and prepare them for varsity level baseball.

The Coaches’ League will consist of 7-9th graders and will prepare our kids for JV level baseball.