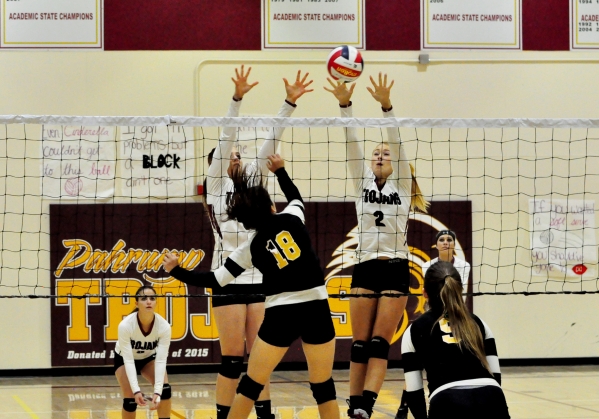 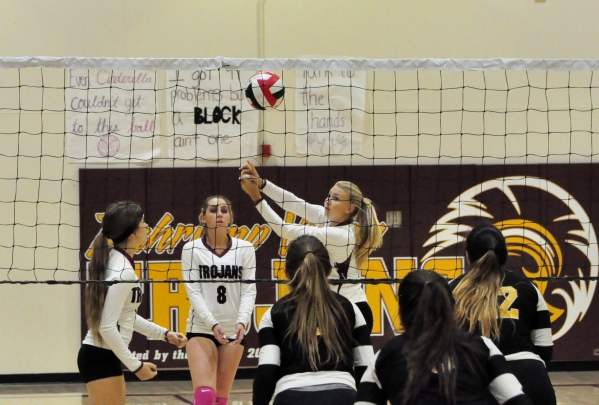 Trojans volleyball bounced back from a disappointing loss to Mojave on Monday by defeating Clark on Wednesday night in 3 sets, 25-15, 25-20 and 25-23.

Trojans coach Jill Harris said it has been a hard week for her as a coach for she feels Pahrump Valley (8-11 overall, 2-3 Sunset League) should have taken the games at Mojave.

“It’s been frustrating for me,” the coach said. “I really don’t know what the problem is.”

Clark was a warmup for a more intense schedule ahead. The girls play at home against Cheyenne (1-13, 0-5) on Tuesday and then play at Faith Lutheran (11-9, 5-0) to end the first half of the season on Thursday.

Harris is not really that worried about Cheyenne.

“We beat Cheyenne in a tournament,” Harris said. “They aren’t as good as they have been in the past.”

She said the Desert Shields are lacking a good solid hitter in the front.

The coach believes her team can compete with Faith Lutheran but they have to step up their game.

“We need to step up the intensity of our game,” she said. “We worry too much about mistakes and making errors. We need to just play the game and relax.” She felt her team did that against Clark.

In the Clark game Lauren Koenig had 9 kills and Jill Smith had 14 assists and 17 digs.

The home game against Cheyenne starts at 7 p.m.