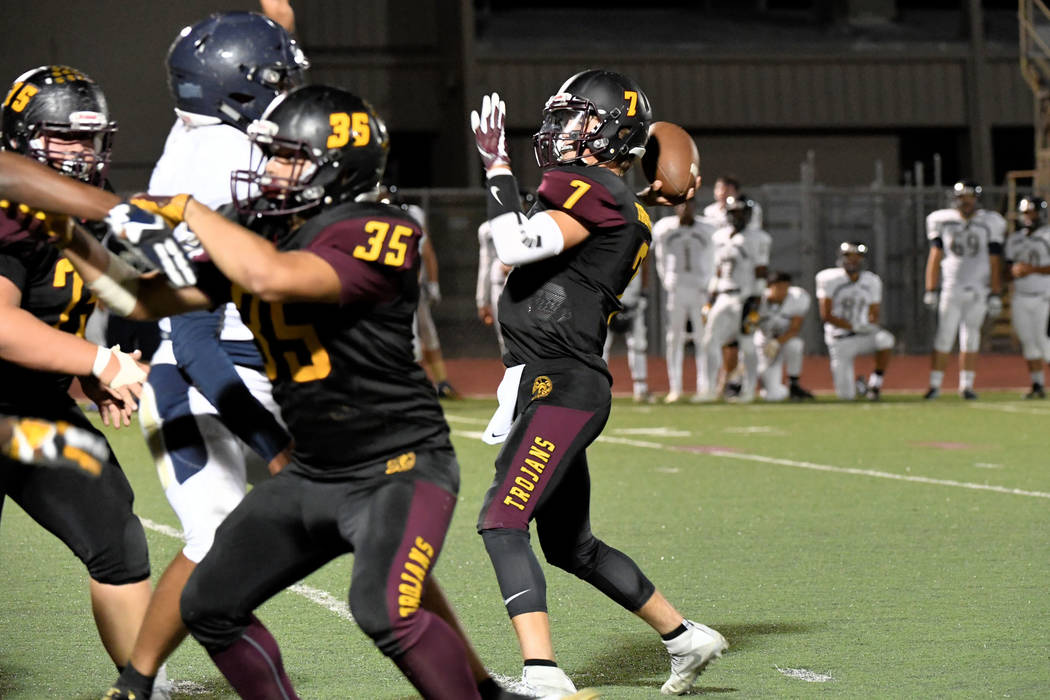 Peter Davis/Specail to the Pahrump Valley Times Dylan Wright goes back to pass during Pahrump Valley's key Class 3A Sunset League victory over Cheyenne on Friday night in Pahrump. 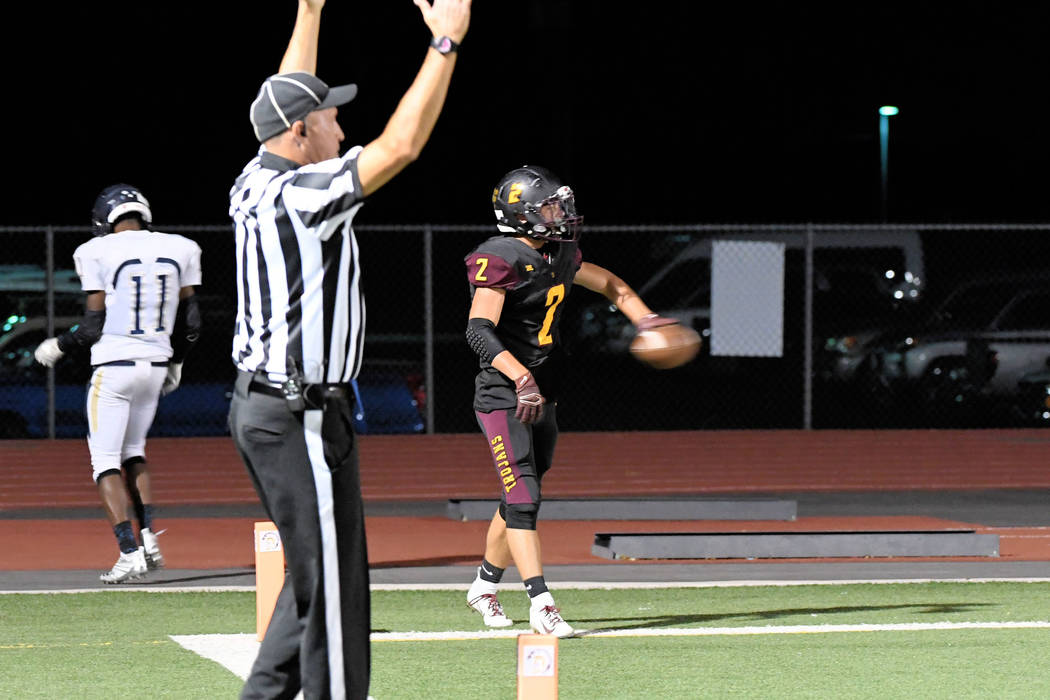 Pahrump Valley came out with an intensity coach Joe Clayton said he had not seen before, and he said one of the reasons might be emotional.

Clayton told the team before the game that his high school football coach, Gary Everson, was in hospice care with stage 4 cancer, while Monday was the 10th anniversary of the death of former assistant coach Preston Doctor. Either of those situations could pack an emotional punch, but both of them were simultaneously on the minds of players and coaches.

Everson coached at River View High School in Finley, Washington, for 17 years, compiling a record of 101-59. He coached Clayton from 1987-90.

“I would not be a teacher or a coach if it wasn’t for him,” Clayton said after the Trojans manhandled Cheyenne 38-12 Friday night. “He was the most influential person in my life, along with my father.”

Clayton shared Everson’s situation and his memories of the coach with the team.

While Clayton played for Everson, he coached with Doctor.

“He was a Pahrump Valley Trojan, went to college and came back to coach,” Clayton recalled. “I was the offensive coordinator; he was the defensive coordinator. Monday will be 10 years since he was killed in a motorcycle accident, the Saturday after one of our football games. So we lost him midseason, and that’s what the “DOC” is on the wristbands you see all the coaches wearing.”

Football is an emotional game. This time, the coaches were feeling it, too.

“We had a bit of an emotional attachment to this game, and I saw a bit of fire in the boys that we haven’t seen before,” Clayton said. “I don’t know how much that played into it, but they were fired up more than ever before.”

The Desert Shields’ first drive of the game saw them move quickly into Trojan territory. But Joshua Rose’s second-down pass was intercepted over the middle and returned to the Cheyenne 40.

The Trojan player on the receiving end of the pass was senior Willie Lucas, who wasn’t even on the roster when the season started.

“We were trying to recruit some athletes, and he was one of them,” Clayton said. “We needed a safety.”

In this case, offensive coordinator Craig Rieger was the one who brought Lucas on board.

”I was in weights class with Coach Rieger and some of the other football players,” Lucas said. “During the class, we started talking about football, and he started bringing up how he needed tall guys who can jump and who are fast. ‘Kind of like you, Willie,’ he said. He brought up how I would be good at playing corner or safety. It got me excited thinking about it and put an image in my mind that I would be good at it.”

But Lucas has a potential college career in baseball to think about, and injuries aren’t exactly unknown to the Trojans. Josh Belcher and Anthony Pearson are out for the season, Dee Brown has been unable to play all year, and after Friday night’s game Joey Koenig was limping off the field after being helped off by two teammates during the fourth quarter while Dylan Grossell sat on the bench after the game with an ice pack against his neck, which was still on his shoulder as he left the stadium.

So playing football was not a decision to be made lightly.

“Five minutes later I called my mom and asked if I could play,” Lucas said. “She said she was going to ask my dad soon after that. They weren’t really down with it because of my baseball career and the possibility of getting hurt. They said I could make my own choice, just be careful and be smart about it.

Lucas hadn’t been involved with organized football since playing quarterback in eighth grade. He did keep up with how the Trojans were doing through friends on the team, and now he’s dropping back in pass coverage — which has been an issue for the Trojans this season.

“Willie’s only been with us for three weeks,” Clayton said. “He hasn’t played for three years. He’s a senior, we put him out there, and he gets an interception. How about that?”

The Trojans’ offense is designed to wear down opponents with a punishing running game, but every once in a while a situation calls for a pass. Often, they have responded.

The most recent example came late in the second quarter Friday night, when, on a fourth-and-5 play, sophomore quarterback Dylan Wright found senior Joey Koenig for a 20-yard scoring pass that gave Pahrump Valley a 22-0 lead.

“That was a huge pass, a huge catch,” Clayton said. “We only throw the ball one or two times, and it’s usually for a touchdown or for about a 50-yard pass. That was a phenomenal play.”

Wright and Koenig have established a nice connection since the former took over at starting quarterback during the second half against Sunrise Mountain. Wright has completed just four passes, all of them to Koenig for 175 yards and two touchdowns.

“We always tell the kids: When we throw the ball, it’s for first downs and touchdowns,” Clayton said. “It’s just like a passing team that can run the ball. If you’re a running team that can pass the ball, the defense is always in turmoil.

“If you look at our stats, we’ve scored touchdowns on probably 60 percent of our passes.”

Well, that’s the kind of statement that requires looking up. Clayton was exaggerating, but not by very much. According to NevadaPreps.com, Trojan quarterbacks have completed 10 passes this season for 264 yards and four touchdowns, or a touchdown 40 percent of the time.

But Nico Velazquez also has a touchdown pass, bringing the total to five touchdowns in 11 pass completions, or 45 percent. However you slice it, that’s a pretty efficient passing game.

It would be a glaring omission not to mention the role penalties played in the Trojans’ victory. The sheer numbers are startling: Cheyenne drew 13 flags for 115 yards. But some of the penalties were deep in Cheyenne territory, meaning it was half the distance to the goal line rather than a full markoff. And some were more critical than others.

On Pahrump Valley’s opening drive, the Trojans gained 28 yards from scrimmage. The drive, however, was 52 yards thanks to two face masks and an encroachment. On their second possession, the Desert Shields moved from their own 15 to the Trojans’ 45, but two holding calls and two sacks helped create a fourth-and-33 situation. On the ensuing punt, the snap sailed over punter Mike Reed’s 6-foot-3 frame.

Reed raced back toward the end zone to field the ball and punt it, but the low line drive didn’t go far, and Pahrump Valley’s Jalen Denton fielded it inside the Cheyenne 15 and took it to the end zone for the Trojans’ second touchdown.

The Trojans even got help on their impressive 99-yard drive just before halftime. On a third-and-6 from the PV 5, the Desert Shields were called for encroachment, bringing up a more manageable third-and-1. Nico Velazquez easily rushed for the first down. A few plays later, it was third-and-7 from the 35 when Cheyenne encroached again. Velazquez gained 5 yards on third-and-2.

The Desert Shields, who covered 64 yards on two plays in 16 seconds to score just before halftime, got the ball back to start the second half, trying to pull within one score. Offensive pass interference, intentional grounding and a false start later, and it was second-and-50. The Trojans scored on the ensuing possession and coasted from there.

Next up for Pahrump Valley is Del Sol (4-3, 1-1 Sunset), which had been an amazing story — until last week anyway. With just one winning record since 2009, the Dragons, 2-8 a year ago, won four of their first six games and scored at least 40 points in each of their past three heading into a Sunset League game against Democracy Prep.

And then the wheels came off.

Facing a team that Pahrump Valley pulled away from in the second half for a 48-25 win, the Dragons managed just seven points. Del Sol outgained Democracy Prep 247-71, but the Blue Knights returned the opening kickoff for a touchdown and held on for a 9-7 win.

That doesn’t mean this week’s game against the Dragons will be a walk in the park. After all, they held Democracy Prep, a team which gained 257 yards against Pahrump Valley in the first half, to just 71 yards of offense. That warrants respect, even if the Dragons haven’t seen anything quite like the Trojans’ rushing attack.

But the story of Del Sol is offense. Quarterback Andre Nevarez leads Southern Nevada with 1,700 passing yards, completing 100 of 186 passes for 14 touchdowns, but he has been intercepted 11 times. His favorite target, Markell Turner, is averaging almost 20 yards per catch with 33 for 651 yards and six touchdowns. Trey Alexander provides balance, rushing for 731 yards and eight touchdowns.

Needless to say, the Del Sol passing attack and the Pahrump Valley rushing attack should provide a fascinating matchup Friday night in Las Vegas. And it should be the game of the year in the Sunset League.

“Who would have thought that?” asked Clayton. “Del Sol’s tough, but the nice thing about Del Sol is we’ve got a ton of film on them. It just so happens that their schedule played into our hands. We exchange two weeks worth of film from each coach, and it just so happens everybody’s played Del Sol when they send us film. So we’ve got a lot of film on Del Sol. We’re prepared for them. We’ve looked at them a lot, and they have some talent.”

Dylan Wright handled kicking duties Friday night because Andrew Avena had a bad knee, Clayton said. “I found out 45 minutes before game time that he wasn’t going to be our kicker,” he said. … Velazquez is confident that Friday night’s game was not an aberration and a sign of things to come. “We have high hopes that we can go all the way to state,” he said after the game. … Clayton thought Cheyenne made its first mistake (of many) before play even began, opting to defer after winning the coin toss. “Right from the start we established that we were going to punch them in the mouth, and they didn’t like that,” he said. The Trojans scored on their opening possession when Avena ran it in from 3 yards out. Casey Flennory ran for the 2-point conversion.