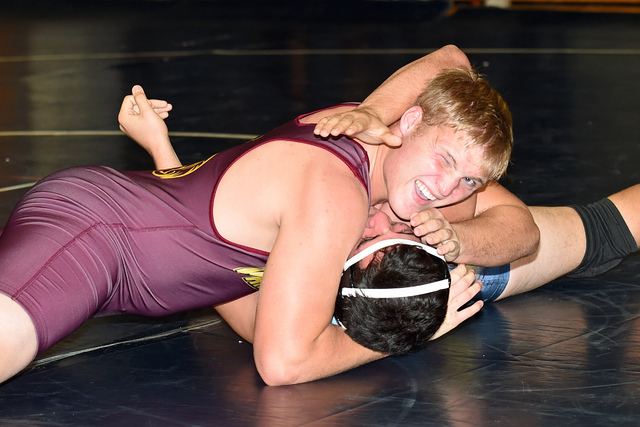 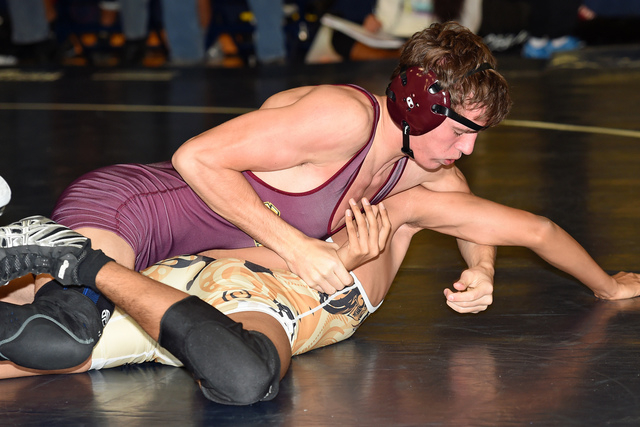 The Trojans wrestling team had their first home match against Sierra Vista last Thursday night. The Trojans mattmen didn’t disappoint the full stands and beat the Mountain Lions 54-27 in their first conference match of the season. The team then went to the Spring Valley Duals in Las Vegas and finished third at one of the toughest wrestling tournaments in the valley.

Trojans Coach Craig Rieger really wasn’t too worried about Sierra Vista, but they got his attention early on in the lower weight divisions during the match.

The team got some help from a forfeit. At 106 pounds Joseph Zarabozo won by forfeit but then things were a bit shaky as Nathan Trudeau at 113 got pinned.

“That hurt us because Trudeau was wrestling really well. He was winning and then he got pinned,”as Gino Gusman at 120 pounds, John McDonald at 126 pounds, and Antonio Sandoval at 132 pounds all lost by pins. With those early losses, this put the Trojans behind in points 18-21.

“The scare came when Antonio Sandoval was winning on points (7-3) and then got pinned,” Rieger said.

Zeke Mendoza at 160 came in and lost a close one that went three rounds. He was pinned in the third. The Trojans were up by three at that point, 24-21. This would be the final loss of the night for the Trojans.

Sam Tucsnak at 170 pounds came in and won by forfeit. He was followed by Johnathon Corrow at 182 pounds, Jax Clayton at 195 pounds, Jeremy Coates at 220 pounds and Jace Clayton at 285 pounds. Corrow got a second round pin, and then Jax, Coates and Jace all had first round pins.

When Jace was asked if he thought he would win his bout, he replied, “I knew I would win. I had never seen him before. I looked at him and knew just by looking at him I would win. I got him on a basic head lock and he went down like a bag of rocks.”

To be more accurate, it took Jace Clayton 13 seconds to pin his Sierra Vista foe.

“Truthfully, once we get to Tucsnak at 170 pounds all the way up we are pretty solid. I was impressed by Sierra Vista, they wrestled well. They have some pretty good wrestlers.”

The Trojans traveled to the Spring Valley Duals on Saturday.

“At this tournament, the coach always puts us in a tough pool. It’s one of the toughest tournaments in Las Vegas. I would like to take first place. Then Tuesday at home will be a tough match as Spring Valley comes to town. They were second in state last year,” Rieger said after the match with Sierra Vista.

At the Spring Valley Duals:

They first faced Western High School and won 69-9. Next up was Foothill High School, a very strong Division 1 school, the Trojans lost by a close 36-43. The Trojans then beat Las Vegas High School, 54-27.

The tournament did not come without some personal upsets to some of the Trojans seasoned, state tournament-experienced wrestlers.

Some had their overall season records stained a bit.

Levi Gundacker, a 138-pounder, faced a really tough Foothill (Division 1) opponent, Damien Ortega, and was beaten by a pin in the second round. Ortega had placed second in the 138-pound weight class of a 2014 11-state wrestling event called the Royal Crush, a new event of the USA’s Wrestling Folkstyle Tour of America.

Then there was 170-pound Samuel Tucsnak and 285-pound Jace Clayton. They also suffered losses, by decision, to Foothill. It goes as Trojans Coach Craig Rieger has always said, “There’s no shame in losing to a good quality wrestler.”

When Coach Rieger was asked who stood out overall for the Trojans thus far in the season, he answered emphatically, “145-pound Sam Brophy, who left the Tournament with a 9-0 overall record for the season thus far. Sam Brophy has not been beaten; he hasn’t lost one.” To watch senior Trojan Brophy wrestle, you learn quickly that he calmly but passionately and smoothly works step-by-step through a plan that normally leads to a quick pin of his opponent. He’s also quite adaptable, quickly learning his opponent’s susceptible moves, and finding ways to make them work to his advantage.

Some of the varsity Trojans’ personal weight classes are not yet settled, as there are still within-team challenges that may continue until the end of December.

Joseph Zarabozo, a senior at 106 pounds, was 2-2 for the tournament. Zarabozo started the tournament for the Pahrump Trojans by leading off beating his Western High School opponent by a technical fall of 20-4. He then lost to strong Foothill and Las Vegas opponents by pin. He came back to beat his final Clark opponent with a pin in the third round at 5:33. Zarabozo’s season record thus far is 6-3.

Nathan Trudeau, a sophomore at 113 pounds, was 1-3 for the tournament. He beat his first opponent, Western, by major decision of 13-5, and lost his other bouts by pins. Trudeau’s season record is 2-7—he’s a younger, new-to-varsity wrestler, being mentored by his older, seasoned teammates.

Gino Gusman, a junior at 120 pounds, was 4-0 for the tournament. Indeed, a very accomplished wrestler, Gusman beat his first three opponents by pins in the first round at 49, 19 and 74 seconds. He won his fourth match by forfeit. Gusman’s season record stands at 8-1.

John MacDonald, a sophomore at 126 pounds, was 1-3 for the tournament. He lost his first three rounds by two pins in the second round and a pin in the first round. He won his final tournament match by forfeit. MacDonald’s season record is 2-7.

Levi Gundacker, a senior at 138 pounds, was 3-1 at the tournament. He soundly beat his first, third and final opponents by pins at 47, 15 and 60 seconds. Gundacker’s season record stands at 7-2.

John Clark, a senior at 152 pounds, was 0-4 at the tournament. He suffered two very close losses by decisions of 7-8 and 10-11, one loss by a major decision in the third round, and another by a pin. Clark is a fighter, with a season record of 1-4.

Zeke Mendoza, a senior at 160 pounds, was 1-3 at the tournament. Coaches Rieger and Fred Schmidt said they wished each Trojan wrestler had the spirit and go-get-‘em drive of Mendoza. He’s a wrestler who won’t quit. Mendoza’s season record is 1-4.

Samuel Tucsnak, a senior at 170 pounds, was 3-1 at the tournament. He suffered one loss by 5-11 decision to a very strong Foothill opponent. He beat two other opponents with pins at 2:31 and 3:11, and one match he won by forfeit. Veteran wrestler Tucsnak’s season record stands at 8-1.

Jaxon Clayton, a senior at 195 pounds, was 4-0 at the tournament. He soundly beat his second and third opponents by pins at 50 and 44 seconds, and won his first and last matches by forfeit. Jaxon’s season record stands at 8-1.

Jace Clayton, a senior, topping the weight classes at 285 pounds, was 2-2 at the tournament. Jace, having placed second at the state tournament last year, is an accomplished and tough wrestler.

He won his first match by forfeit. In his second bout he came up against Foothill and lost by a painful 3-11 major decision. He soundly beat his third opponent, Las Vegas, by pin in 10 seconds.

He lost his third round by a close 1-3 decision to Clark. Jace’s season record stands at 6-3.