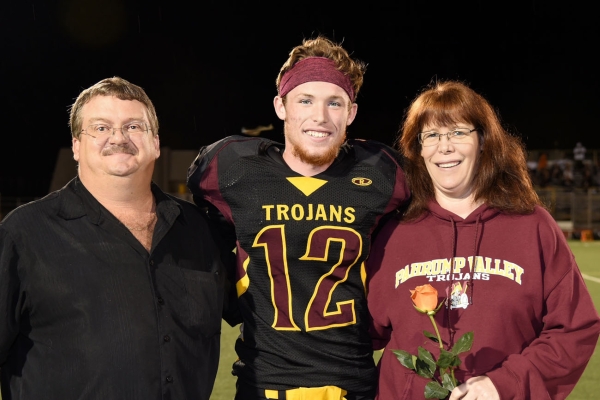 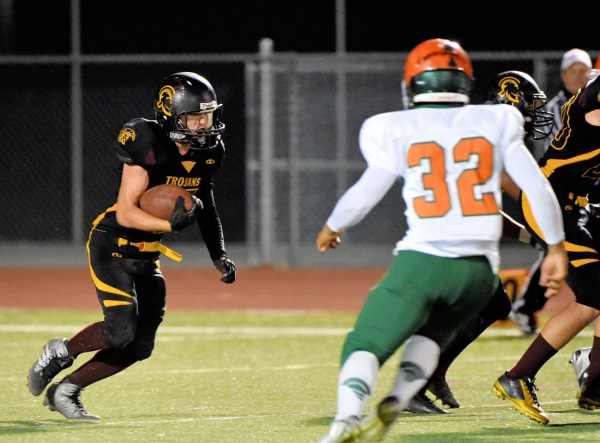 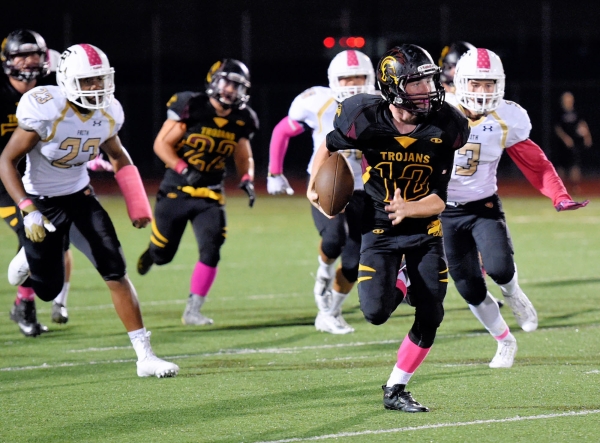 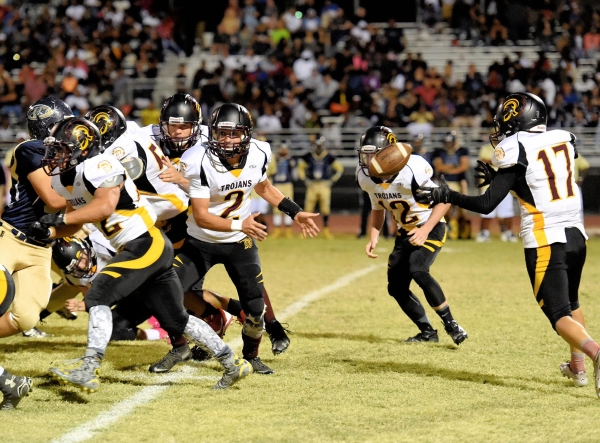 It seemed like every time you turned around at a Pahrump home football game this season the announcer, Mike Colucci, would be mentioning either Jesse Dillon or his older brother, Devlin Dillon. Both players on the field made an impact on every game they played together.

The two were defensive backs and both were receivers on offense.

“They both bring a positive and competitive edge to this program that is helping it move forward,” Trojans coach Adam Gent said. “They have been some of our best players on both sides of the ball and we are going to need someone to step up next year to fill Devlin’s big shoes. He will be missed. We are lucky to have Jesse for another year and with his work ethic and leadership, he will only be better as a senior.”

Playing with a sibling in any sport is a cherished time and this was the last year the two played together on the same field.

“It’s a really special thing when brothers are able to play on the same varsity football field at the same time and on the same team,” Gent said. “I was able to do that with my older brother Nathan, and it’s something we still talk about and cherish to this day. Devlin and Jesse are different personalities but both great young men.”

Devlin Dillon is the oldest brother and talked about how he felt about leaving his brother.

“I was pretty sad at the last game,” Devlin said. “I have been playing with him for so long and teaching him everything I have learned about the game.”

Jesse talked about the bond he developed with his older brother..

“To play with my brother for the past seven years has been exciting,” he said. “Football has created a bond that you can’t get anywhere else.”

He said he and his brother started playing football at the middle school together.

“I think it will hit me next season,” Jesse Dillon said. “But the last game was normal.”

Jesse said one of the best things about playing with his brother was learning from him and also getting praised by him.

“Against Del Sol I remember my brother looking at me and he said, ‘This is the best game you have ever played,'” the younger brother said. “To have him say that it was like a coach saying it because I look up to him so much.”

The younger brother said his brother’s best game was against Spring Valley.

“He got both TDs and on defense he had an interception.”

The two brothers said they share everything with each other and they enjoyed the game of football because it allowed the two to blow off steam.

“If we had a problem at home we would take it out to the football field,” Devlin said. “I would tell my younger brother that I would get him on the field.”

He said they may have competed hard against each other but they also protected each other as well, on the field and off the field.

“Protecting each other on the field was big,” Jesse Dillon said. “If you hurt one of us you hurt us both.”

Both brothers agreed that the two of them had always have been competitive on and off the field with things like who can hit harder or who can throw the farthest.

Sometimes they would have the most ridiculous competitions recalled Devlin.

The oldest said they would even compete at video games.

“I am better at Madden Football and he is better at College Football,” he said.

On the field there was no better duo. Their communication on defense was all by looks.

“We could just look at each other and know what the other was thinking,” Devlin Dillon said.

Some of the most memorable plays this year involved both Dillon brothers.

“I once threw to my brother in a game,” he said. “I went in motion and then the QB threw the ball to me and I then tossed it to my brother, or at least tried to. The ball was incomplete and sailed over his head. But can you imagine if he had caught it and scored a touchdown.”

Devlin Dillon thinks his brother’s best game this year was at Del Sol.

“He had this one catch in the corner of the end zone and I think he had an interception,” he said.

At the end of the season, both brothers were honored by the coaches.

Trojans coach Craig Rieger had this to say about them.

“They are intelligent football players,” Rieger said. “They know the game as far as offensive and defensive scheme. They know their responsibility on the football field. Because they know the game, I believe their teammates look to them for leadership on the field.”