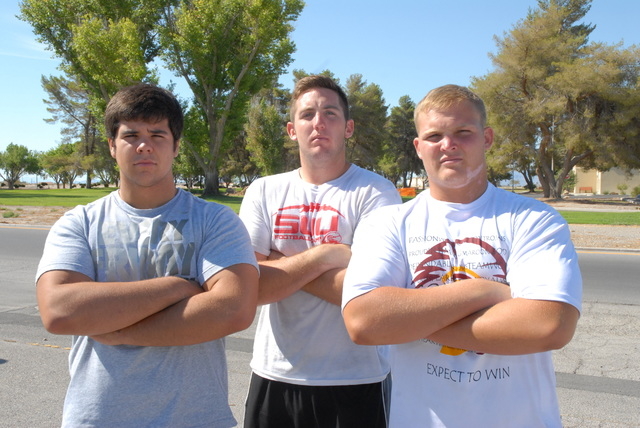 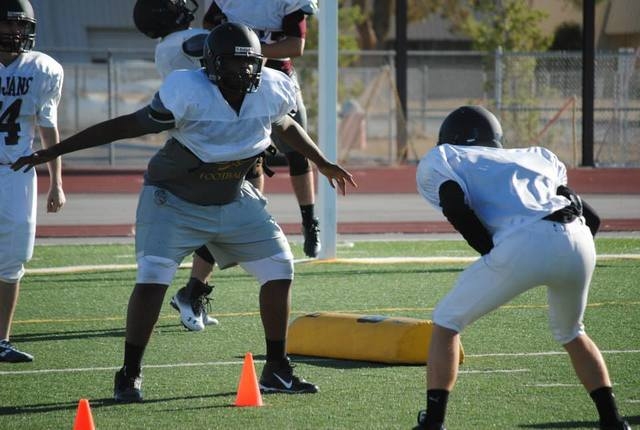 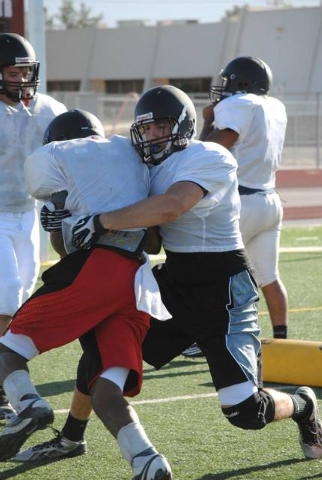 For those clamoring for some football action, the long drought is over. Football is back. The NFL preseason started last week and high school football in the valley is gearing up to start with the first game scheduled against Bonanza on Aug. 29 at home at 7 p.m.

High school football will be in full practice mode with the start of a heat acclimatization period of 14 days, which starts on Aug. 9. The period means a gradual buildup of intensity so players get used to the heat. The end of this period usually ends in double-day practices, but this year will just be longer nighttime practices because of the new Nye County School District schedule. The schedule has school starting on Aug. 11.

At the end of June the Trojans football team attended the Southern Utah University football camp and Trojans Coach Joe Clayton was ecstatic about the results.

Jace Clayton, at 6-foot 2-inches tall and 255 pounds, has been a leader of the Trojans line for the past year. He says the Trojans are ready and are showing huge signs of growth, “We are extremely excited to start the year. We are excited about how we are going to have such a great year. We are eager to get started, test things out and work on stuff,” he said. He pointed out that the line was highly skilled in what they did. “Most of us have been together since Pop Warner, so we have been playing together for a long time. This is the last year and everything has been building up to this year,” he remarked.

England is a 6-foot 5-inches tall and 245-pound player. He has more confidence this year because of his experience. The coach believes in his tight end and said his size, speed and hands will allow England to play at the next level. “Now I see my reading is a lot better than it was. It always helps having more experience. I wish I would have played with these guys in Pop Warner. That would have been awesome. Experience is a key to our success,” England said.

Coates is at 6-foot 2-inches tall and at 260 pounds. He said the SUU camp showed the strength of the line. At the camp there was a contest called the “goal line challenge.” The goal of the drill is to score off the defense. Every time your offense scores, a new defense comes out and if the offense gets stopped then a new offense comes out. “Last year we didn’t do the goal line challenge on the last day of camp and this year we did. Our offense scored five times in a row. They had to take us off the field so other teams had a chance to play. That just shows how good our offense is this year,” Coates explained.

Over the years prior to Joe taking over as head coach, the Trojans had problems with size on the line and being able to protect the quarterback. Jace believes these problems are behind them. “This year we will be coming back bigger and stronger on the line,” Jace exclaimed. “We have everyone over 200 pounds. There is only one junior that is not benching 300 pounds and he is getting there and now we all know what we are doing. We are just coming back better and refined. I really don’t see any line posing that much of a threat to us.”

The fact the Trojans held their own at the SUU camp is an accomplishment in itself. In that goal line challenge, the team competed against Division I schools such as Desert Hills, Cimarron, Arbor View, Foothill and Palo Verde. “We were not intimidated by the bigger schools out there,” Jace explained. “We have pretty good size up front. The weight room has been key to all this. We look back to the linemen two years ago and we look at us. We are bigger because of the weight room. Protecting the quarterback has changed. It has improved a great deal. The pace is different. When we were sophomores coming up to play we were not really ready. Our junior year we got the pace down and now it’s easy to protect him.”

Last year both the defensive line and the offensive line was made up of the same personnel. This year the team has increased in size and numbers, which will allow the lineman to get a breather. Joe thinks if they had more players to fill in for the line last year that the team would have won the overtime game against Cheyenne. All three linemen believed that if that game was played tomorrow, the Trojans would be the victors.

Now that the new offense has been mastered Coates feels the coaches have spent more time on perfecting the defense. He said more attention is being given to the defensive ends, which means a possible increase in sacks for the Trojans defense this season. The Trojans had 14 sacks on the season and averaged 1.6 sacks per game in 2013. The defense has done several things to correct this situation. “Last year we ran a 4-3 and did not do much defensive end stuff. This year we have done a lot of defensive end drills. We are getting better with every practice as far as our responsibilities,” England said. Coates agrees with England and said, “We definitely have worked a lot more on it than last year. We definitely have the mindset down this year. Last year it was a bit confusing to get to the box which is behind the tackle’s feet.”

According to Jace, this year the defensive line hopes to funnel the runners to the sides. “We switched from penetrating deep to just two yards in, so the runs will have to be contained by the defensive ends. We got it down. They are not getting through the line this year. Our line will be able to stop up the middle runs,” he said with determination.

Finally, the most important question posed to the linemen: How can your parents afford to feed you? England said he eats six times a day and can eat 4-5 buffet plates.

“I am really into this question, this is something I can answer,” Jace said enthusiastically. He said he eats all day long. “I tend to eat 10 pieces of bacon, and maybe four eggs cooked, scrambled or poached. After that I will eat burritos for lunch. Dinner, I can eat pulled pork or anything with meat. At a buffet I can put down four full plates filled to the brim. My mom won’t tell me what the food bill is because it is a lot.”

Coates says he puts down a lot of food too. He was the only player interviewed that ate large quantities of fish. When asked if he had Asian blood in him, he replied, “No, I just like fish. I do two eggs and oatmeal before football, and when I get home I will eat fish eggs and carrots and peas. For lunch, I will make rice seaweed wraps. I will eat every 2.5 hours.”