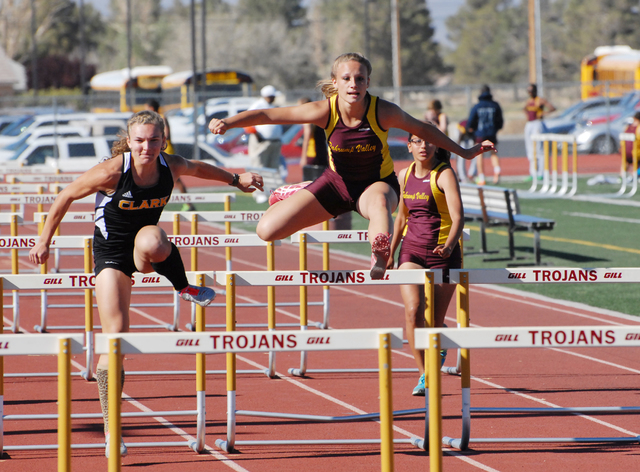 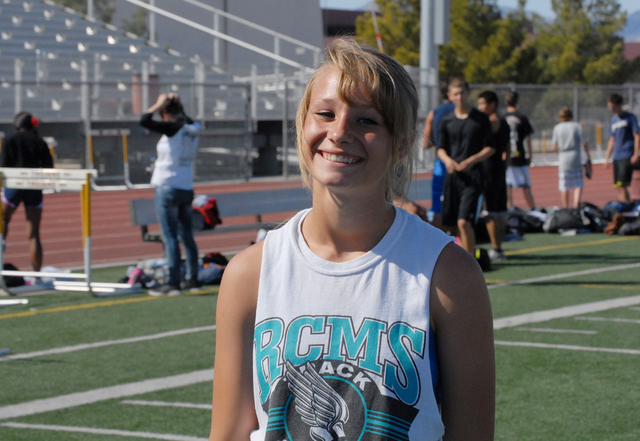 Trojans Coach Wes Icard said he was more than satisfied with the team’s performance.

“I am trying to get a lot of the athletes qualified for different events already,” he said. “I am just moving them around. These are events I am not going to have them in every week, events I know they are strong in. I just want them to have that in their back pocket.”

For the boys sprinters, Keenan Harris is back healthy and took second in the 100-meter run with an 11.1. Icard said Harris is very talented and athletic and if he listens to his coaches he will do well this year.

Dylan Montgomery was the top finisher for the boys 200-meter run. He finished fourth with a 24.1 second sprint.

In the boys 400-meter run freshman Cole Goodman finished fourth for the Trojans with a 59.2.

Odegard also ran the 1,600 meter. His time was 4:58.4, which was good enough for second place. Icard said the sky is the limit for him.

“He is competitive and dedicated,” Icard said. “He wasn’t even at the newcomers meet last Friday and went to the meet and ran those times.”

The two top runners for the Trojans boys in the 3,200-meter run were freshman Layron Sonerhulm (11:29.2) and sophomore Joseph Sladek (11:59.6). They finished third and fourth respectively.

Pahrump’s only boys relay team to finish with a time was the 800-meter relay composed of sophomore Nik Clark, Odegard, Aaron Minjares and Sonerhulm. They finished in fourth place.

At the moment, Icard is working on his relay teams. He said his only weakness for both teams are the relay teams. He knows he will have to bolster both girls and boys teams by the regional meet. He said for the boys and girls he did not really have a solid team right now.

Even without relay teams, the team scored enough points to win the meet. Icard said this will change.

“My main athletes are only allowed to do four events and they all have other events they are strong in,” he said. “He said he still is figuring things out.”

In field events, the coach said junior Isaac Davis was able to get a 6-foot mark in the high jump because he has been training the entire offseason. Freshman Jacob Swain took second with a 5-foot jump.

The Trojans took first through fourth in the long jump. Davis also took first in the long jump with a mark of 18-06. Senior John Clark was second with an 18-04 jump and sophomore Jesse Dillon was third with a 17-11 mark. Fourth was taken by sophomore Riley Sutton with a 16-10 jump.

The Trojans took first through fourth in the triple jump too.

In the pole vault, the Trojans have a new coach named Mary Duff from Wisconsin, who is training the vaulters this year. junior Nico Cipollini led the boys and took second place with a 9-06. According to Icard, he remains the best vaulter the team has.

For the girls sprinters the point scorers were senior Kelbie Middleton, who finished in first place in the 100-meter run and sophomore Kelsey Souza finished in second with a 13.4-second time.

“Some of our jumpers like Meghan McDermott are also good sprinters as well,” Icard said. “McDermott is running the 100-meter hurdles.”

McDermott ran a 17.4 in the 100-meter hurdles, which was good enough for first place.

In the 200-meter run, senior Kelbie Middleton finished in first with a 25.7 time, Kelsey Souza was third with a 28.4 and Bethany Calvert was sixth with a 30.1 time.

“I think Sydney Dennis is a great one to coach,” the coach said. “She is only a freshman and she works hard, she runs hard, shows up all the time and she just wants to do better.”

In the field events, the Trojans girls did well too. In the shot put, the girls took first with sophomore Caeli Havel throwing a 29-09.00. Havel also took first in the discus with an 82-01 and sophomore Madison Shay threw a 75-02 for third.

In the high jump, freshman Annabelle Brophy jumped a 4-04 to take second and Bethany Calvert had a third with a 4-03.

McDermott took first in the long jump with a 15-07 jump and Bethany Calvert took second with a 12-06 jump.

McDermott also took first in the triple jump with a 33-08 jump while Brophy took second with a 22-08 jump.

The boys and girls teams are both preparing for the Heitkotter Invitational on Saturday. There will be 17 teams at this meet at Faith Lutheran High School.