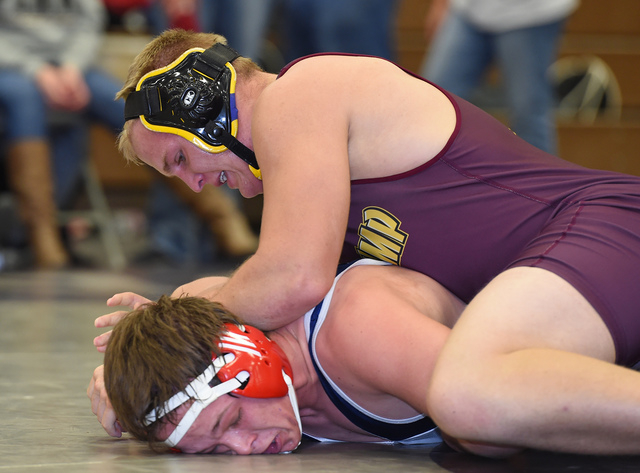 The wrestling team has had another fantastic year and every year I am always impressed by the way the coaches teach these young men about the sport.

Yes, talent is something we are blessed with but in the past three to four years the Trojans coaching staff has taken good talent and molded these young men into some fine wrestling machines.

Trojans Coach Craig Rieger and his staff, Fred Schmidt, Rick Marshall, Joe Clayton and Mike Colucci, all deserve a standing ovation from the town. Thanks for a fantastic season coaches. Also, thanks to John Gundacker for volunteering and all your support.

If you have never seen a wrestling match at the PVHS gym, well it’s time you have. The bleachers are packed and it’s something to behold. It’s like attending fight night at a World Wrestling Entertainment match. The crowd is loud and proud and full of energy — plan on it next season.

The team is on its way up north to the Winnemucca Events Center for the Nevada Division I-A State Wrestling Championships on Friday and Saturday. Thanks again to Chief Scott Lewis who had them escorted out of town. It’s great to know the County supports the team along with all the other Trojans fans. So if you heard the sirens leaving town on Thursday morning that was our team.

We will be sending 11 great wrestlers this year. The Trojans took the regional championship for the second year in a row, which was a feat in itself, considering all the great talent the Southern region has.

One of the many talented Northern teams the Trojans will face is Lowry High School, who has been the reigning state champion for the last six years and has taken the state championship 16 times.

I spoke with the Sports Editor Tony Eriquiaga of the Humboldt Sun, who covers Lowry and he said Lowry is sending 17 wrestlers to state. He said to look for Gabe Molina at 132 pounds, Nate Nelson at 145 pounds, Beau Billingsly at 182 pounds (he is a three-time state champion) and Luis Cardenas at 285.

Senior Nick Nelson will be our 132-pound contender. He didn’t face Molina at the Spring Creek Invitational, which was the only time the Trojans wrestled against Lowry this year (Molina was the Spring Creek champion which had 29 schools attending).

At 145 pounds we have Sam Brophy. If anyone has a chance at beating Nelson, it’s Brophy with his guillotine move and quick legs. Nelson and Brophy didn’t see each other at Spring Creek because Nelson didn’t wrestle there, but Brophy went to the semifinals and lost.

Jax Clayton was the Spring Creek champion at 195. Look for him to beat out Hummel even though the two did not wrestle there. They would have if Hummel had won his semifinal match.

Billingsly finished as champion at Spring Creek. Senior Jonathan Corrow finished in the semifinals and would have wrestled him if he had won. Look for Corrow to meet up with him this time.

Then there’s Pahrump’s Jeremy Coates at 220 pounds who can’t be ignored. Coates finished strong in the finals at Spring Creek. He lost to a guy from Shoshone. The main wrestler he has to worry about is not even from Lowry but Clark’s Jacob Chaparian. That match could go either way.

We shouldn’t say that Cardenas will beat Jace. He faced him last year in state and this year in the finals at Spring Creek. Clayton is ready and hungry. He should beat him this time.

Eriquiaga said he is looking forward to the Cardenas match with our Jace Clayton at 285. He said in his mind that’s what the final will be. I trust his judgment, Eriquiaga has been doing this for 13 something years. He also mentioned Jax Clayton at 195. He agreed with me that Jax should be the state champion over Anthony Hummel.

Well Mr. Eriquiaga, I hope you are right. The Trojans should come out with a lot more than just one or two state champions. We are hoping for better because all but one wrestler going to state are seniors. We have a lot of experience headed up north.

Eriquiaga also said that the Lowry coaches respect the heck out of the Pahrump team and the way they wrestle. That was good to hear because they will be hearing a lot about Pahrump wrestling as long as Rieger remains the coach.