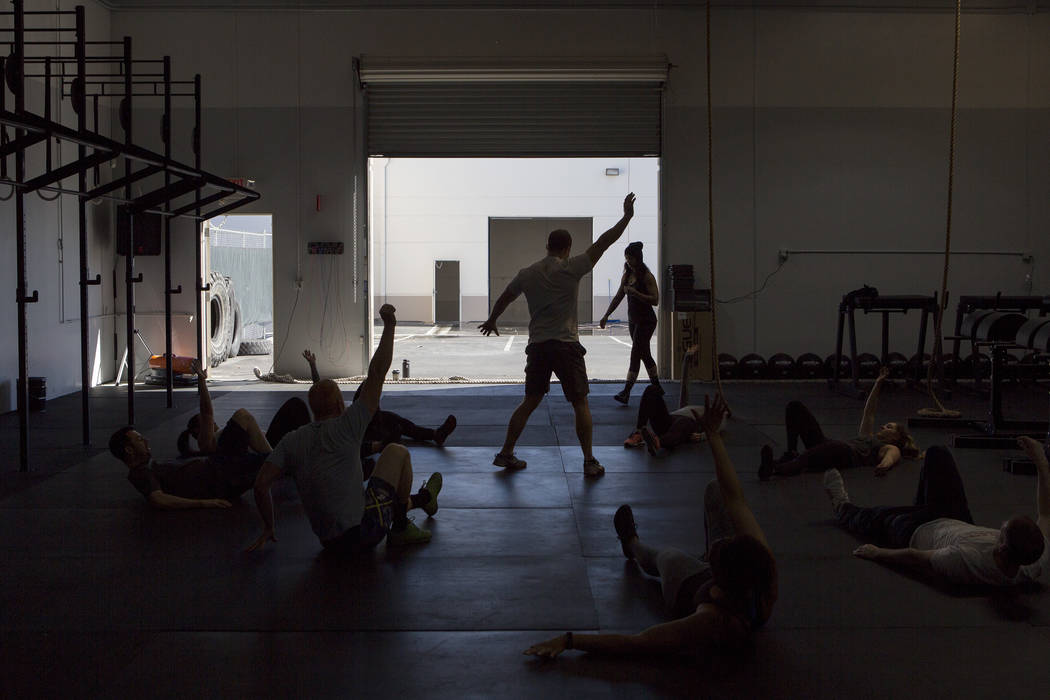 Bridget Bennett/Las Vegas Review-Journal file Drew Pollner, center, leads an exercise during a training session at Project Fitness in Southern Nevada earlier this year. Sports Editor Vern Hee writes that you not only have to go to the gym, but as you get older, you need to stay active.

Senior health and fitness are always in the news, and obesity is an epidemic in the country.

In fact, as we get older the metabolism slows down and it actually takes more exercise to fight off those pounds. It seems like there is a conspiracy in this town to keep us fat. Just look at all the fast-food restaurants popping up.

It has taken me a long time to see the light and get the right formula for success.

My personal battle with the weight all started about four to five years ago.

And really, I would have thought nothing of it if not for my wife trying to lose a few pounds.

She tried the diets and diet alone didn’t seem to help. Then she went to the gym and consulted a physical trainer. When she started, she was diabetic and on a boatload of pills. Five to six dress sizes and a new wardrobe later, she is doing great. No longer diabetic, and her doctor has taken her off a lot of meds. She has done great. She still struggles but struggles less.

I was trying to be supportive but didn’t think I had a problem until I went to the doctor. To my surprise, my doctor told me that I was obese. Me, obese I said, I feel great. But I wasn’t. I had two new pills that I had to take that said otherwise, one for high cholesterol and the other for high blood pressure, which only confirmed to me that I was not alright.

The gym is not a license to eat

My first lesson was, I wasn’t in my 20s anymore.

I hit the gym but my attitude then was if I hit the gym, then I can eat whatever I want, right? Wrong. That all went out the window when I turned 50, but it took me a few years before I figured that out.

In my senior years, I have learned that I must work harder to lose those pounds, even though I go to the gym at least three times a week.

When I was younger I would lose weight just by exhaling and now it is quite a process.

You not only have to go to the gym, but as you get older, you need to stay active.

My wife watched me struggle with the extra weeds we got this year from all the rains during the winter. Our acre and a quarter lot was filled to the brim with weeds. She said we should move into a smaller property. She actually made sense. But then I got to thinking, if we did that I would never get to work in the yard, and really, that would be the death of me. Working in the yard burns a lot of calories. If I did not have that, I probably would gain even more weight.

The real villain in the house though is the TV. Spending time in front of Netflix has killed my weekends. I, like a lot of Americans, love to binge watch. My wife and I love to pick a good TV series that we have never seen and just watch it from start to finish.

So as I have discovered binge watching, I have also had to discover excuses to go outside, especially as the days get longer and the summer heat sets in. Believe me, that TV looks awfully good when the A/C is on with my favorite show on and it is 105 degrees outside.

So at times, you have to force yourself to do projects or hobbies that take you away from your slothful self.

The other component in this is actually changing the way you eat. It took me the past three years to actually take my diet seriously. Last year about this time, I was outside for six months building a patio structure for my daughter’s wedding, and I lost 15 pounds.

I had not changed my diet but was doing something every weekend and just working my butt off. I lost weight and thought I could just keep eating whatever I wanted. It never occurred to me that I couldn’t keep that up after the wedding and so I just ate normally and gained it all back.

Another setback before changing ways

This year when I saw my doctor he diagnosed me with sleep apnea. I was getting worse and not better, even though my weight had stabilized, but I was not losing. That was the final straw. I whined to my wife but she wasn’t listening. The doctor was going to order the breathing machine and everything, but he said if I lost 30 pounds I would not have to get it.

It was a challenge. My ego also kicked in. I really didn’t want the machine. So now I am into eating just oatmeal in the morning. I have cut bread out of my life and eat things like fruit for dessert. I have cut all sodas out of my life, and I am down to one cup of coffee a day. No more chips, junk food or sweets. This and the gym has kept me dropping a pound a week.

I eat simple proteins and veggies every day, three times a day. I eat like a monk and fight off the junk food cravings. It’s hard. Yes, I hate it, but the alternative would be to do even more exercise. Not doing it.

So far I am winning the battle of the bulge, but it was a process. It took me seeing my wife’s struggles, a doctor and seeing what failure looked like before I changed my life.