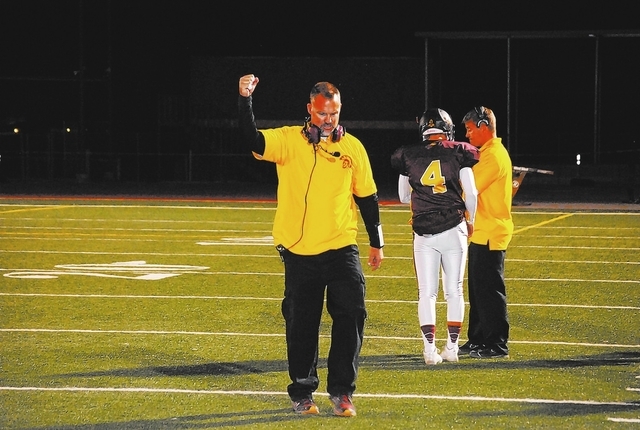 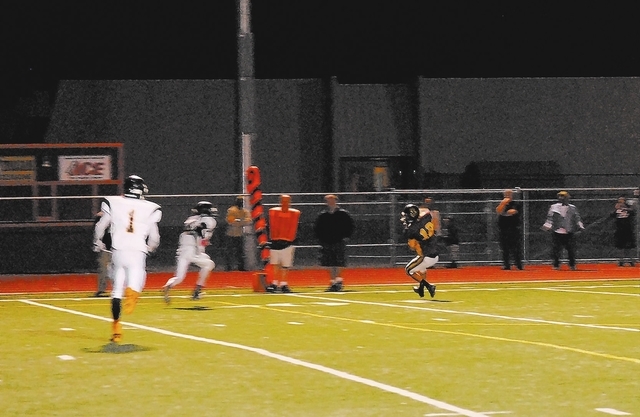 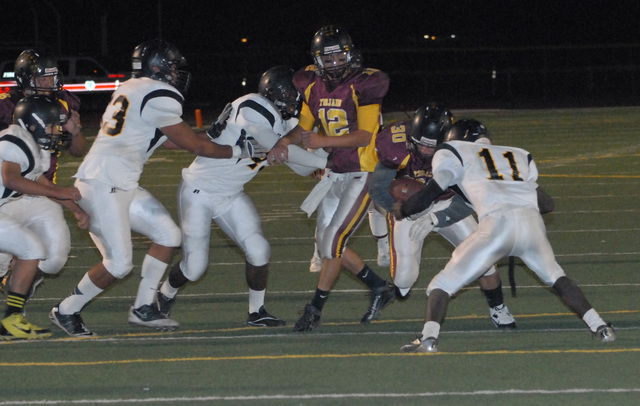 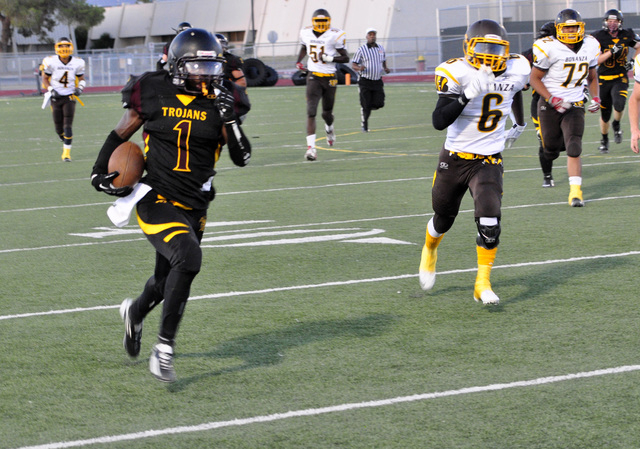 With just 7.5 seconds remaining in the game, the Trojans came from behind and scored the winning touchdown against the Clark Chargers. Trojans won the game 25-22.

Trojans are now 1-0 in league and improve to 2-3 overall. The Trojans play the Cheyenne Desert Shields on the road this Friday. The Desert Shields are coming off a 62-12 win over Western in their first league win and first win of the season. Cheyenne is now 1-4.

It was homecoming and the Trojans were playing the Clark Chargers, a team the Trojans had beaten the previous year.

On paper the Trojans and the Chargers were pretty evenly matched. The Chargers had a decent passing game which averages 123.8 yards per game going into the game with Pahrump. The Chargers offense was led by quarterback Clifton Smith.

The Chargers’ rushing game averaged 148.5 yards going into the game with Pahrump and was led by running back Milan Dixon.

The Trojans countered with a celebrated rushing attack, which averaged about 172 yards per game and a little under 100- yards passing per game.

The Chargers led in the first quarter 6-0 and then took a one point lead into halftime 14-13. In the third the Trojans took the lead for the first time, 19-14. The Chargers then scored late in the fourth quarter to take the lead 22-19.

With 1:07 left in the game, the Trojans marched 30 yards to the Charger 20-yard line but penalties took them back to the 30-yard line. The Trojans had to do this all in the air, something they are not known for doing. It was third down and the Trojans had 7.5 seconds to go on the clock. Sophomore quarterback TJ Milk dropped back to pass and saw Segura wide open on the 10-yard line and nailed him with a perfect pass. Segura, with no time on the clock, turned around and went in for the score to win the game. Milk showed a lot of poise for a sophomore quarterback to take the team from his own 37 down to the 30 and then the score.

After the game, Milk said, “I was just thinking we had to score. I kept thinking this is it. I was kind of nervous. We all worked so hard this year. Everyone has worked hard and for it to come down to a win like this is just awesome. The last play that was called was on the fly. It was completely on the fly.”

When he says “on the fly” he means the pattern Segura ran was not in the play book.

AJ said he caught the ball on the 10-yard line and decided to turn it up field.

“It was pure instinct,” Segura said. “When we threw the ball it was almost picked off. I got pretty angry and said just give me the ball and just give me the chance. Lining up the adrenalin closed up a bit and I was gasping for air. I was just thinking about my job and you have to trust everybody and let everybody do their job. It’s just a team effort.”

On the last play of the game, Clayton explained how the pass pattern was not in the books. He said it was not like a backyard play where you tell someone to go out and just do any old thing.

“We did not have to call several passing plays in a row because our passing plays are simple so we just have a few patterns,” he said. “AJ was told when they have a zone to just try to get in the open area. It was not like it was not planned in practice. Plus No. 11 went 25 yards deep and left the entire field open and AJ just put a little move on him.”

Clayton was comfortable knowing that the victory was in the hands of Milk and Segura.

“I was not really nervous, not when it is those two,” Clayton said. “And that is why AJ is comfortable being in that spot. If the ball is thrown anywhere near AJ, rightfully so, the best athlete on the team makes that play. Segura is a player and a game changer. It did not surprise me at all and if you give the ball to anyone on the field you give the ball to AJ Segura. Whether he is throwing the ball, running the ball he is our offense.”

When asked if he had worked on clock management at all in practice because it went so smoothly, the coach replied, “No, we just have some smart kids … they know the game. The problem I had was when Jeremiah jumped, there was a double whistle. He jumped when he heard the second whistle that was a mistake they had. We were planning to spike the ball but then we had a penalty and that stopped the clock. The penalty set us back with no time outs, and we were able to set something up.”

On the game, the Trojans had 121-yards passing, and 143-yards rushing.

Segura finished with three touchdowns, two through the air and one rushing. Milk passed for 6-12 for 121 yards. Maughan had 15 carries for 63 yards, Chad Uyeno 4 carries for 19 yards, Deon Estes 2 receptions for 39 yards.