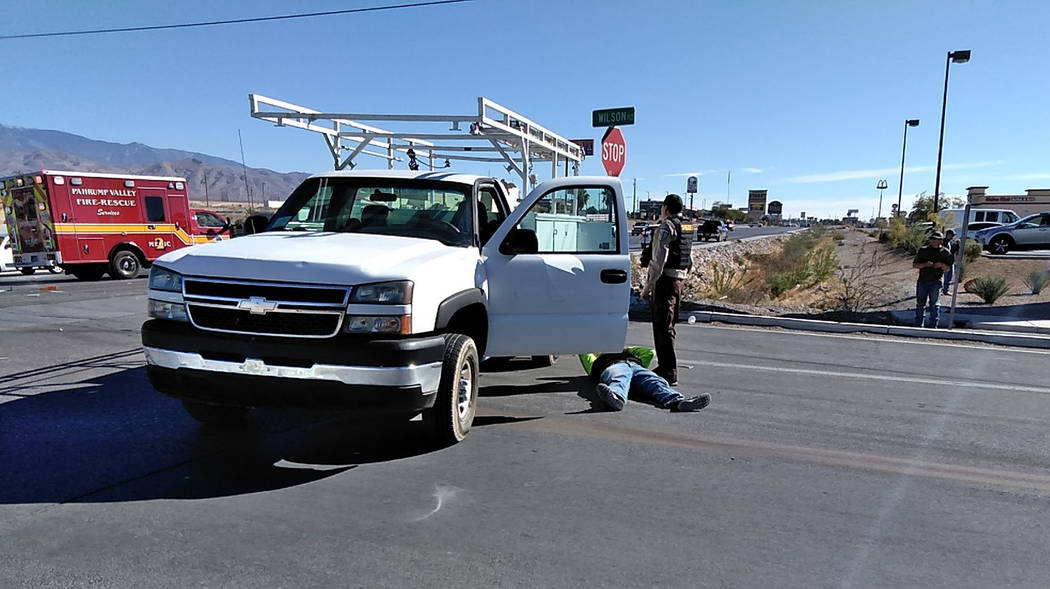 Selwyn Harris/Pahrump Valley Times A man on the pavement awaits the arrival of Pahrump emergency crews following a two-vehicle collision at the intersection of Southbound Highway 160 and Wilson Road just after 11 a.m. on Wednesday. The man was transported to Desert View Hospital with undisclosed injuries. A second man was medically assessed at the scene.

Selwyn Harris/Pahrump Valley Times Both north and southbound traffic along Highway 160 was diverted onto side roads as first responders worked to clear the scene of Wednesday morning's two-vehicle crash at Highway 160 and Wilson Road. The Nevada Highway Patrol is investigating the exact cause of the collision.

At least one person was transported to Desert View Hospital following a two-vehicle collision along southbound Highway 160 and Wilson Road late Wednesday morning.

The crash, involving an early model Ford dually pickup, and a Chevy commercial work vehicle, forced the closure of Highway 160 in both directions.

Upon arrival, emergency crews found one injured driver on the ground, next to his vehicle in the middle of Wilson Road.

He was ultimately transported by medics to the hospital, while a second individual involved in the crash was assessed on the scene.

As a result, all eastbound traffic along Wilson Road approaching Highway 160 was diverted onto East Street, just after 11 a.m.

Both drivers are expected to recover from their injuries.

Nevada Highway Patrol troopers are investigating the exact cause of the collision.