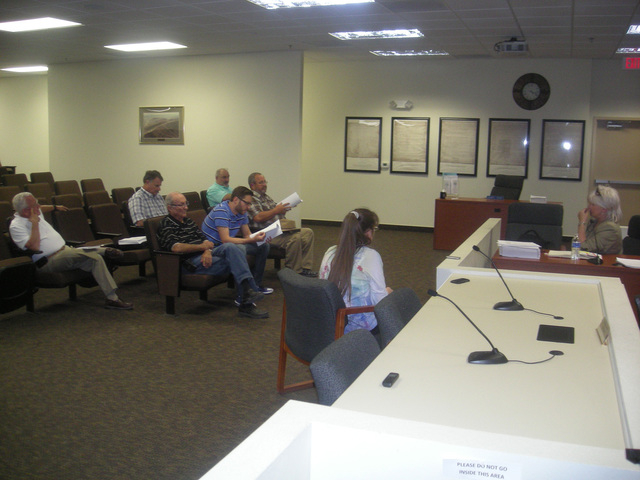 The hue and cry has arisen throughout rural Nevada for years about the 87 percent of federal land in the state, but only 10 people were interested in a Monday workshop in Pahrump about the workings of a Nevada Land Management Task Force plan to transfer some of it to the state.

Assembly Bill 227, passed by the 2013 session of the Nevada Legislature, set up the task force comprised of members of all 17 Nevada counties, to draw up the plan. Nye County Commissioner Lorinda Wichman said they hope to present the plan to the State Legislative Committee on Public Lands in September for review, before the regular state legislative session convenes in February 2015.

The task force recommends transferring 7.2 million acres in phase I, with the following lands given priority: the 4.2 million acres of checkerboard pattern of federal-private land along the railroad corridor along Interstate 80; a million acres already suitable for disposal by the U.S. Bureau of Land Management; lands under existing BLM recreation and public purpose leases or rights-of-way; lands where the BLM owns the mineral estate and the surface estate is privately held; solar energy zones; 1.05 million acres leased for geothermal exploration and 250,000 acres authorized for disposal in federal legislation.

If the state is able to effectively manage those lands in phase I, the task force recommends a subsequent land transfer of BLM, U.S. Forest Service, Bureau of Reclamation surplus land and other federally managed lands identified as surplus. The plan is to exclude the transfer of congressionally-designated wilderness areas, national conservation areas and lands administered by the Department of Defense, Department of Energy, Bureau of Indian Affairs, U.S. Fish and Wildlife Service and National Park Service.

Nevada would manage the transferred lands in trust for education, mental health services, public medical services, programs for endangered species recovery and to mitigate county governments for the loss of revenue they receive from the federal government under the Payment in Lieu of Taxes (PILT) program.

“A lot of people are extremely concerned if you get all the federal land you’re going to turn around and sell them and then we’re going to get high density populations all over the place and that’s a valid concern because in order to get the state lands office up and running there has to be enough of those sales to get employees in place to manage the lands,” Wichman said. “There are some reasons why you wouldn’t want to sell some lands off so the people have to tell us.”

A report dated May 30 by the task force estimates based on management of state trust lands in Arizona, Idaho, New Mexico and Utah from 2008 through 2012, said if Congress transferred a similar amount of land for the state trust in Nevada the state could realize revenues of $7.78 to $28.59 per acre.

“Would we go broke or would we see an uptick in the revenue being generated? We took the lowest possible generating revenue from the average of those other states and we took the highest expenses from those other states so we could reduce that margin and we took that margin and we still come out $357 million could be generated every year above and beyond the expenses and that’s with the worst possible case scenario,” Wichman said.

By contrast, the BLM spends a lot of money on programs that don’t generate revenue and loses from 64 cents to $1.40 per acre, the task force report said. The task force believes lands offering immediate revenue generating potential should be focused on first. The Nevada Division of State Lands has only seven people on staff now, the task force estimates if 7.2 million acres were transferred during phase I, the staffing level would have to be between 96 and 162 people.

“Is BLM are they talking to our state legislature about giving them up or are we going to have to go to federal court to sue them to get these back?” Commissioner Dan Schinhofen asked.

“If it goes to the state for them to manage is what I hear, it’s going to be a helluva lot easier dealing with the state, that’s a given,” Hafen said.

“Let’s assume that the state does everything just as bad as the federal government did, your tax dollars don’t have to go to send me to Washington, D.C. once a year to argue with them. You can pay me for a little bit of fuel to go to Carson City,” Wichman said.

Besides Utah, which is the first to compile a plan, Arizona, Montana, Idaho and New Mexico are also drawing up plans, she said. The main issue still being debated in the Nevada plan is how to handle wild horses and burros.

“This is more like putting my horses in front of my cart instead of behind them,” Wichman said. “It feels better for me to have the plan in place without the legislation first.”

Wichman admitted she was skeptical the transfer would happen when she was first appointed to the task force. But she said the plan has been received positively by U.S. Rep. Mark Amodei, R-Nev. and U.S. Sen. Dean Heller, R-Nev. as well as congressmen in many states who realize how much is being spent on the BLM. But when she asked U.S. Sen. Harry Reid, D-Nev., Wichman said his reaction was, “we’re not going there.”

“At least it will drum up some awareness and maybe some publicity to get some of the issues out in the open so we can get some management styles cleaned up,” she said.

“People who live here who use this land and know this land, and they know this land because their grandfather was on it, those are the people who need to be handling the management of it,” she said, not a brand new BLM range consultant from Minnesota, who wants to close off all grazing because of the drought.