By Keith Rogers and Steve Tetreault Special to the Pahrump Valley Times
August 7, 2015 - 9:08 am 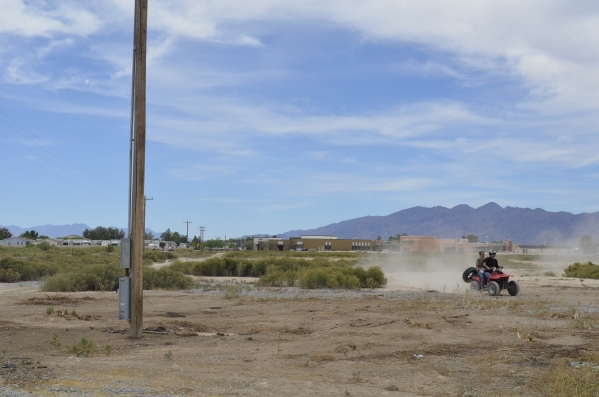 WASHINGTON — The Department of Veterans Affairs awarded a $12.1 million contract Wednesday to build a long-awaited new health care clinic for veterans in Pahrump.

The contract to W&J Development LLC, announced on the heels of VA Secretary Robert McDonald’s visit Tuesday to Southern Nevada, comes three years after the VA solicited bids and as the Nye County community watched other modern veterans’ health outposts open 60 miles away in Las Vegas.

A date for groundbreaking has not been set. VA spokesman Richard Beam said the agency has committed the 9,948 square-foot clinic at Basin Avenue and Lola Lane near Desert View Hospital will be completed within 18 months, “and that clock starts today.”

“The nearly 6,000 veterans in Pahrump have earned the right to have access to the same VA health care as veterans living in Las Vegas do,” said Sen. Harry Reid, D-Nev.

The Pahrump facility will double the size of the current VA clinic housed in a 16-year-old modular building on East Calvada Boulevard that VA officials conceded was showing wear. About 2,500 veterans are enrolled for services at the site.

The new clinic will continue to provide primary care, mental health care, tele-medicine, social work services, radiology and lab services, according to VA spokesman Richard Beam. Reid in a fact sheet said some of the services will be expanded, as well as space added for pharmacy services.

“The benefit of the additional space will give us flexibility,” Beam said. “You can’t necessarily anticipate what needs the demographic will have but the space will allow us to meet needs quicker as they change.”

Veterans in need of complex services or specialty health care will continue to drive to the North Las Vegas hospital, Beam said.

Veterans applauded the news but said much needs to be done.

“The fight doesn’t end here,” said Carl Jones, commander of the Disabled American Veterans Pahrump Chapter 15. “Now we need the VA to build it quickly and find the right staffing to make it operational.”

A series of Nevada lawmakers have pressured the VA to move forward on a new Pahrump clinic dating back to January 2012 when it was first proposed.

The initial target date for a construction contract was Sept. 30, 2012 but that date came and went.

According to VA officials, the project became stuck within the bureaucracy and the lawyers got involved after questions were raised among federal property officials at the General Services Administration whether the VA had the proper authority to move forward with a project of that scope.

Once that was settled, it was discovered project costs had increased in the meantime and needed to be re-evaluated.

Rep. Cresent Hardy, R-Nev., picked up advocacy for the project after winning election last fall to the congressional district that includes Pahrump.

“The delay to award this contract must not be followed by delays in construction,” Hardy said. “The VA owes it to our veterans to keep this project on track and I won’t accept anything less.”