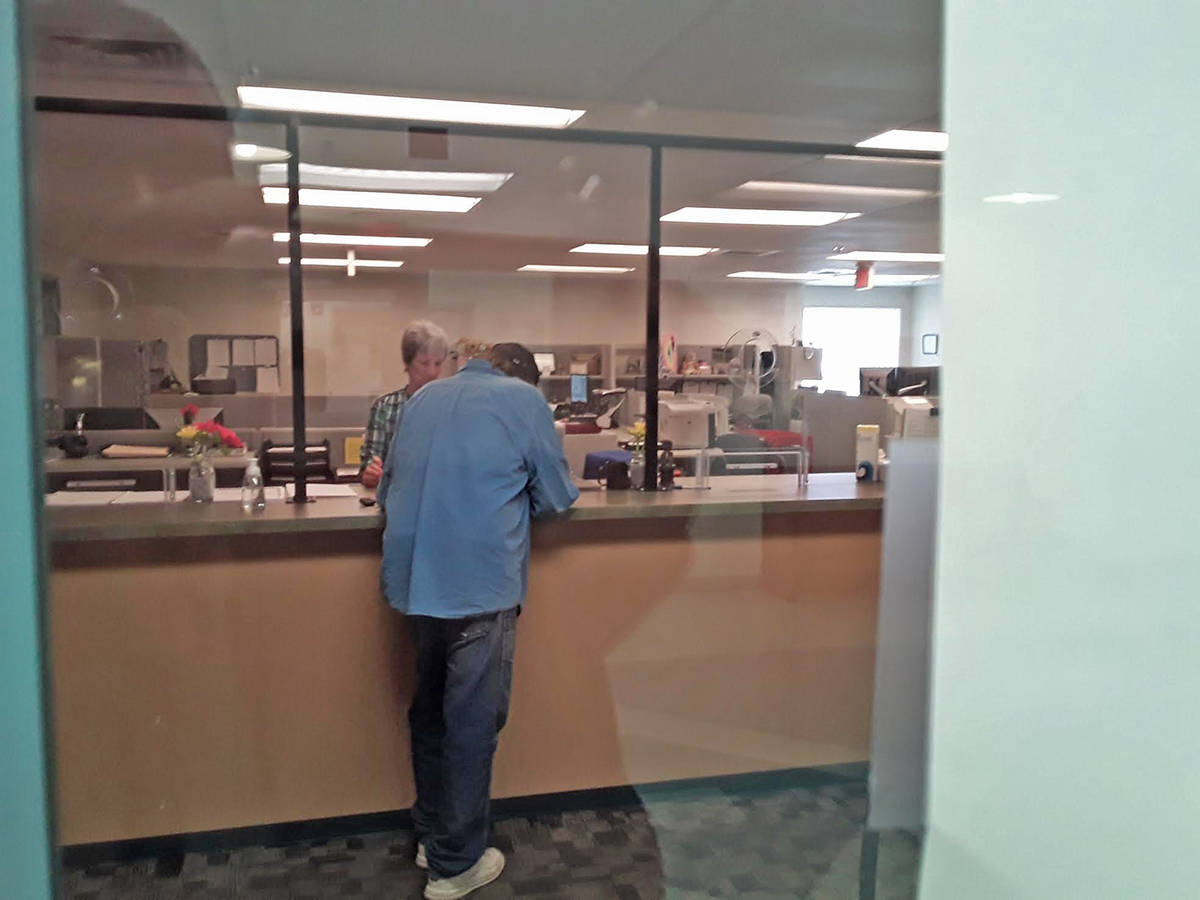 Selwyn Harris/Pahrump Valley Times Taken Monday, June 8, this photo shows a man turning in his absentee ballot at the Nye County Clerk's Office in Pahrump, where only one person at a time is permitted inside. 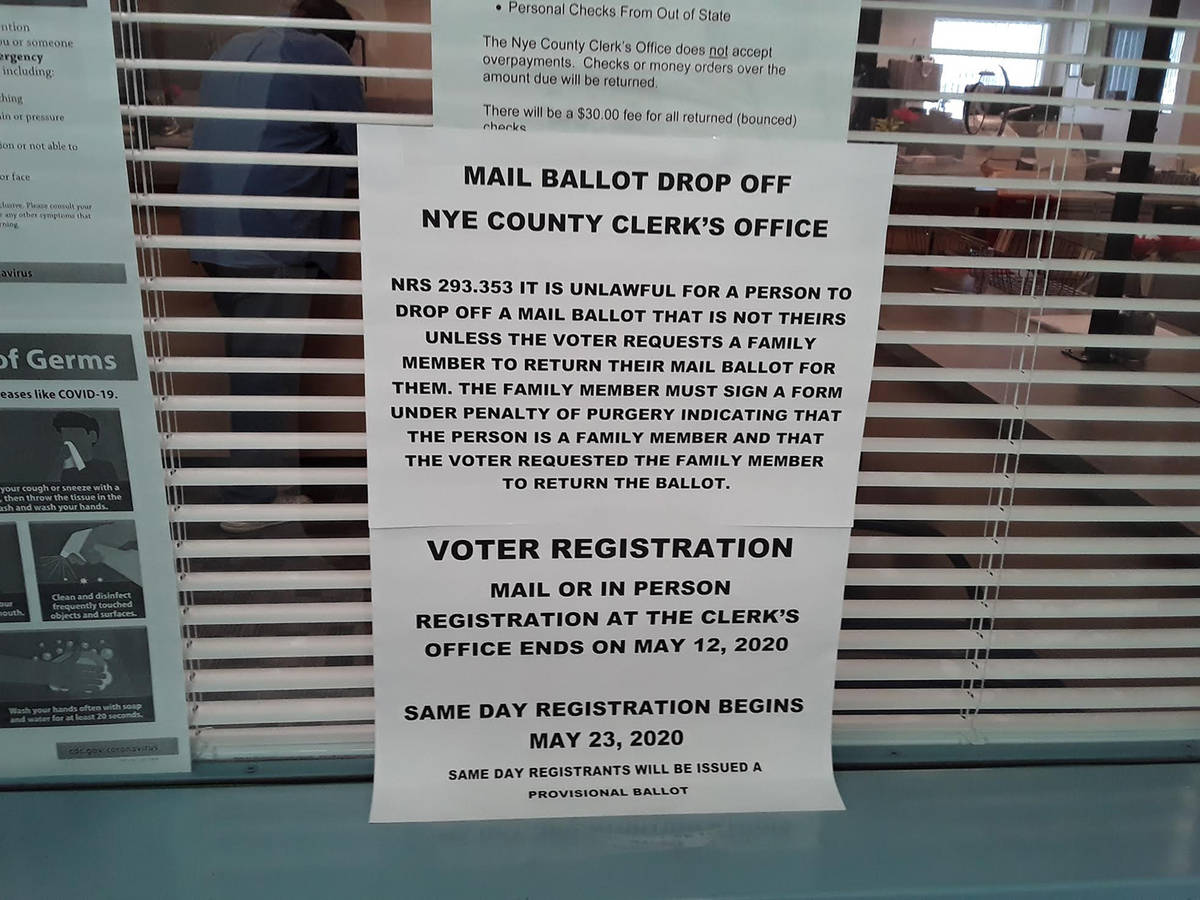 Selwyn Harris/Pahrump Valley Times Notices on the Nye County Clerk's Office windows provided information for those dropping off their ballots or heading in to register to vote or obtain a new ballot. 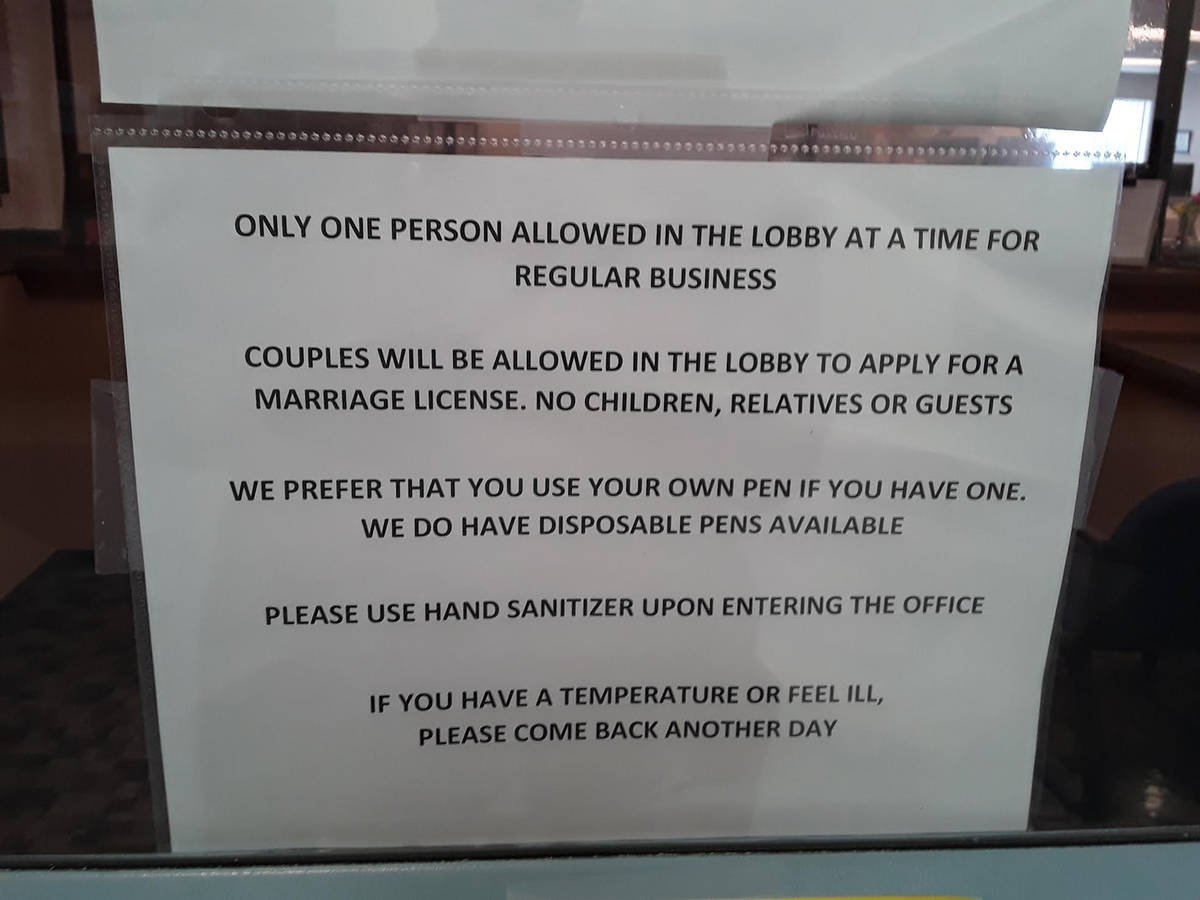 Selwyn Harris/Pahrump Valley Times The Nye County Clerk's Office has several restrictions in place regarding public access, due to COVID-19. Voters were only allowed into the office one at a time to drop off their ballots for the 2020 primary election.

Results for the 2020 primary election are steadily rolling in, with the latest update on the local races provided by Nye County at 9:27 a.m. on Thursday, June 11 and updates from many other counties, which will help determine state and federal races, following within the hour.

All results posted before June 19 are unofficial however, as ballots that are received within seven days of the June 9 primary are required to be counted and county clerks have 10 days after the primary in which to certify the results. In Nye County, there are still many ballots to be opened and the results included in this publication are certain to change.

On Monday, June 8, Nye County Clerk Sam Merlino reported that her office had already seen just over 8,000 ballots received. By the update on Thursday, June 11 that number had ticked upward to 10,310 ballots. This is a higher turnout than during the 2018 primary election in which only 8,652 votes were cast.

“We had a total of about 1,800 ballots to count yesterday and today so we are still getting through them,” Merlino told the Pahrump Valley Times on Thursday morning. “The signatures have to be verified, reconciled to the voters and then opened and counted. It’s a long process.”

While some races are seemingly foregone conclusions, many others are too close to predict with absolute certainty which candidates will arise as victors once all ballots have been counted.

Unofficial results for the primary for Nevada’s Congressional District 4 race, as reported on the Silver State Elections website on June 11, showed candidate Jim Marchant leading the Republican field while incumbent Congressman Steven Horsford was far out in front in the Democratic race.

The Republican Congressional District 4 votes as of June 11 are as follows:

The results of the Democratic Congressional District 4 race so far are:

The Republican and Democratic nominees for Congress will continue their campaign into the general election, where they will vie against each other as well as Libertarian Jonathan Royce Esteban and Independent American Party candidate Barry Robinson.

For Nye County Commission District 1 the votes of the all Republican primary as of Thursday, June 11 stood as follows:

The winner of the district 1 primary will face nonpartisan candidate Darryl Lackey in the general election.

Unofficial results as of Thursday for Nye County Commission District 2, also an all Republican race, were:

The primary will determine the final outcome of the district 2 race.

The Nye County Commission District 3, another all Republican contest, as of June 11 stood at:

The winner of the district 3 contest will battle it out with Independent American Party candidate Lance Schaus in the general.

Nevada Assembly District 36 is another race that will be determined solely by the results of the 2020 primary, with Republican contenders Greg Hafen II and Dr. Joseph Bradley the only two to file for the office. The results as of June 11 are:

Nye County voters also participated in selecting the next representatives for several nonpartisan offices, including Nevada Supreme Court seats B and D and Nevada State Board of Education District 4.

The results for Nevada Supreme Court Seat B as of Thursday are as follows:

Nevada State Board of Education results, as of Thursday, showed:

Nye County School District Area VI is another nonpartisan race voters took part in, with Aaron Compton, Oren Hampton, Mark Hansen and Liese Peterson all on the ballot. However, Peterson dropped out of the race but her name still appeared on the ballot as the decision to discontinue her campaign was not made by the official deadline to withdraw. The unofficial results for this race so far are:

If a candidate in either of these nonpartisan races manages to garner more than 50 percent of the vote, they will be declared the winner. Otherwise, the top two vote-getters will advance to the general election.