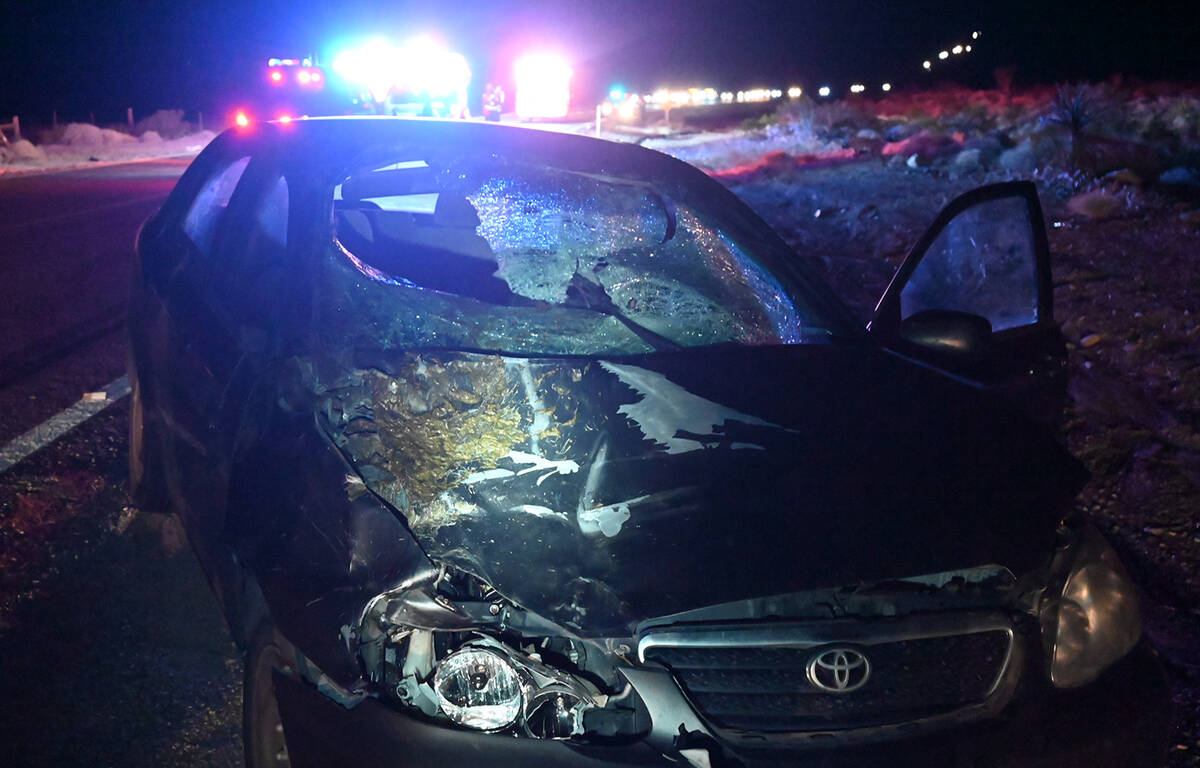 Special to the Pahrump Valley Times Three vehicles sustained severe damage after striking a burro along North Highway 160 late last month. Pahrump Fire Chief Scott Lewis said the scene was one of the worst he's witnessed in several years. Though three individuals were medically assessed, all refused to be transported to the hospital.

A burro was killed after three vehicles struck it on North Highway 160 near mile marker 29, according to first responders, who called it one of the worst “hits” they’ve seen in a long time.

“It was actually three separate incidents occurring from the same burro involving three cars,” Pahrump Valley Fire & Rescue Services Chief Scott Lewis said. “One actually went airborne — like in the Dukes of Hazzard show — where it launched after hitting it, and there were burro parts everywhere.”

The crash occured around 5:18 p.m. on Dec. 20, and while several involved were medically assessed at the scene, Lewis said all refused to be transported to Desert View Hospital.

The vehicles sustained significant damage as a result of the burro strike.

“There was a massive, bio scene that required an engine company to come in and clear that material off of the roadway to ensure safety for any other motorists coming through including motorcyclists and such,” Lewis said. “It reminds us that burros and the wild horses are all along Highway 160, so you have to use extreme caution, use your high beams when appropriate, and slow your speeds up a little bit. You’re impacting an animal that’s that large and it totals your car. In many cases that can cause serious injury, possibly even death.”

Drivers should avoid unnecessary distractions while driving along the highway especially after dark, Lewis said.

Motorists should use caution on Highway 160 north of Pahrump, especially after this year’s summer storms damaged miles of fencing designed to contain the animals in the area between Pahrump and Johnnie.

“There is a large population of wild horses and burros in the area, and it may be easier for them to wander onto the road,” said Tabitha Romero, a wild horse and burro specialist from the Bureau of Land Management Southern Nevada District Office. “We are asking motorists to be extra cautious driving through the area, especially during the dark hours.”

“On that stretch of road, the speed limit is 55 miles per hour and I think it’s incredibly easy to overdrive your headlights,” he said. “There’s several dark-colored bays and black burros on that end of town. A little bit of eye-shine is all you get and it’s probably too late by then. That portion of the roadway is completely within the town for the most part, so it’s also hard to get people to be aware of wild horses and burros when they think they are driving in residential and commercial areas.”