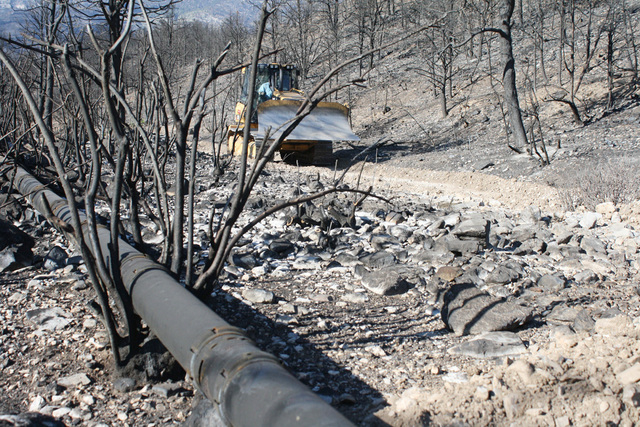 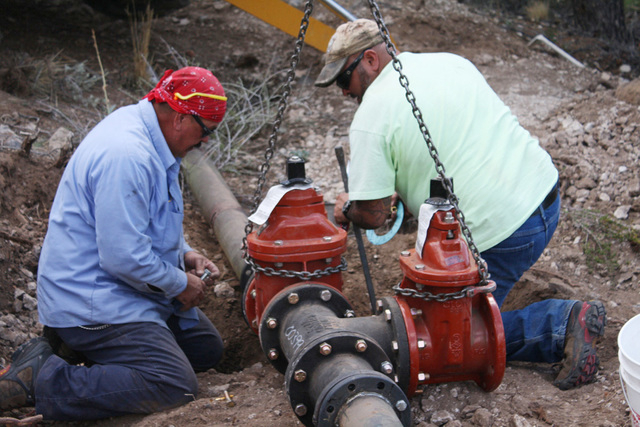 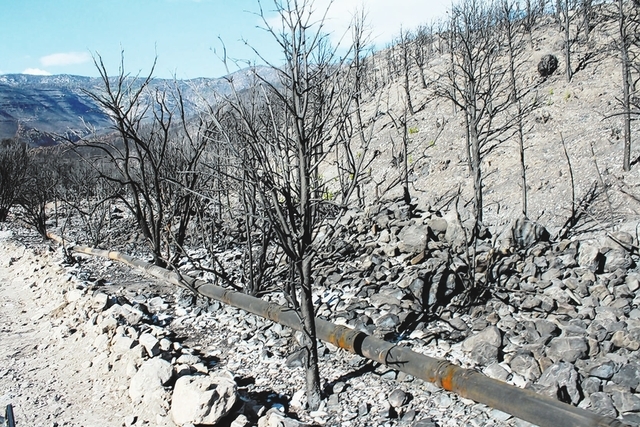 Today marks the 75th day Trout Canyon residents have been without running water in their homes since the Carpenter 1 wildfire destroyed the community’s water line in July.

Residents were close to realizing a solution to the problem last month when work began on a temporary fix to their pipeline, but hopes for a working solution were dashed after severe flooding in the area further damaged the water line.

Now Trout Canyon resident Dennis Walker says the community is back to square one.

“We got a double whammy. We had the fire and then the $35,000 repair bill from the Las Vegas Valley Water District and then they had water moving through (the pipe) for one hour and then flooding wiped it out. So now we’ve been without water for about 75 days,” he said.

For more than 50 years the Trout Canyon community has gotten its water from a mountain spring in the area using a pipe built out of World War II metal munitions canisters.

Repairs to that line began on Aug. 19 after crews from the Las Vegas Valley Water District were recruited to work on it and bring water back into the Trout Canyon community.

Bronson Mack, a spokesperson for LVVWD, said at the time work began on the project materials for the waterline were gathered from around Nevada through the Nevada Water/Wastewater Agency Response Network.

The network reportedly assists member utilities during emergencies by allowing them “to request equipment and personnel to assist during natural or man-made events that impact water and waste water systems,” according to the NVWARN website.

The repairs to the pipeline, which the company agreed to fix for about $35,000, were nearly complete when flash floods caused by recent storms wiped it out.

Walker said his concern is the Trout Canyon community remains unprotected in the face of additional fires in the area. It’s a concern he says is especially worrisome now with the high number of thunderstorms that have sprung up around the community over the last month.

The Carpenter 1 wildfire was started after lightning struck a steep terrain area near Carpenter Canyon on July 1. It quickly grew to cover more than 28,000 acres at its peak.

“We need FEMA (Federal Emergency Management Agency) to coordinate efforts to help us here,” Walker said. “We were trying to get a tank just for fire protection, a 10,000 gallon tank, because when the road washes out, there’s been two major washouts since the fire, no one can get up there.”

Walker said Clark County donated a large tank to the community, which he added is currently sitting in the Mountain Springs area, for use to store water for fighting fires.

That tank, however, has not yet made its way to Trout Canyon, he said.

Walker said with a large water tank in place, even if residents didn’t have running water in their homes, at least they would have water to put out any additional fires that threatened their homes.

The Trout Canyon resident added that his neighbors have formed a nonprofit to help address the water issues they’re now facing because of the fire and flooding, called the Trout Canyon Land and Water Association. They are looking at one or two large storage tanks and possibly even a well as a potential long-term solution to the problem.

After a meeting with the Nevada Rural Water Association’s Dan Tarnowski, Walker said hopes of fixing the current water line that has been in place for more than 50 years is not a likely option.

“He said that’s probably not going to happen to rebuild it,” Walker said. “They’re thinking now of either putting a well in there and not even bothering with the line and transferring some water rights around to do that for a well that way there wouldn’t be a need for a pipe from the spring to the community, but I don’t know.”

If the community is able to get the large potable water tanks in place, they would have running water in their residences for the first time since they returned home after they were forced to evacuate due to the Carpenter 1 fire.

Walker says he fears that solution may take months, if not years to realize, however.

“We’re back to square one. We’ve had another natural disaster and what I would like to know is the people back east they have FEMA help, everyone else gets FEMA help, why can’t we have FEMA help, are we second-class citizens? It feels like we’re a community stuck out in the middle of nowhere,” he said. “It could be years before we get water through here to the residents.”