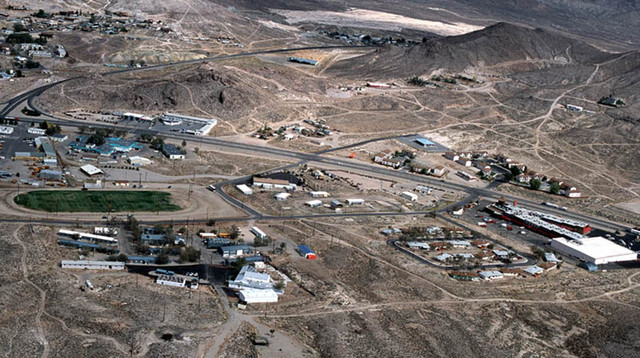 For some people traveling through Tonopah on U.S. Highway 95, it might not be noticed.

But as one resident of the area observed last week, “Look, the star is shining!” And so it is that Tonopah’s star of “hope and peace” once more glistens above the community.

For those not familiar with the community’s 50-years-plus tradition, cast your eyes to the southeast during the holiday season, look atop Mount Brock.

There shines a five-pointed star in the tradition of the holiday season. It first appeared in 1956 and has been illuminated nearly all, if not continuously, each holiday season hence.

It can be seen for vast viewing—miles away on U.S. 6 and 95 highways.

It was a gift to the community from the airmen of the 866th radar squadron. Although that local military unit is long gone, its legacy continues above a community which is proud of its military heritage – including a radar operation which served the country well in the 50s, 60s and 70s – not to mention its air base in World War II and its long-standing commitment to the Stealth project and others at the Tonopah test site.

Since the star was first placed at the Mount Brock facility of the U.S. Air Force, it has often been written on these pages, “Cast your eyes in the evening to the south and observe the star of hope and faith which looks over Tonopah’s holiday season.”

The star dates to the 1950s when the 866th radar squadron was taking shape above the old high school sports complex.

Buildings were going up, airmen and their leaders were being cast in an unfamiliar and desolate location, for many. Most of its officers and probably all enlisted men were far from home and unable to return to family and friends for the holiday season.

According to the archives of this newspaper, “The first occupants of the local Air Force base felt compelled to construct ‘a star of hope and peace’ which would shine above and light their remote station.”

Lt. Col. R. R. Sinclair, commander of the local base, oversaw the efforts of his officers and airmen in the construction of the star.

With no federal permits or applications in their way, they constructed and placed the star atop Mount Brock. Alone, at a base far from home, the officers and airmen designed and constructed a 30-foot aluminum star.

With great effort, they saw to its placement atop the 7,200-hundred-foot peak toward the southern end of Tonopah, the site of their radar scopes and other military operations.

Its bright beam can been seen by the discerning eye when one is driving into Tonopah from any highway direction. It is challenged today by the rejuvenated sign atop the Mizpah Hotel with its bright LED lights.

But for old timers, the star of “hope and peace” predominates for a few weeks each holiday season.