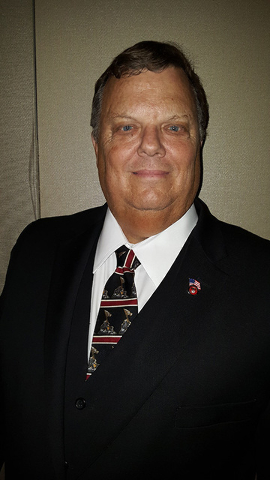 An Amargosa Valley man with his own accounting and tax business there and in Las Vegas is one of three Republicans competing in the June 14 primary for a seat on the Nye County Commission.

“I am at that point in my life where I think I can help the communities,” Scott Mattox said. “For the last several years I have been very vocal about politics and our representatives and the way they’ve been treating us. I was encouraged to run for office with people saying, ‘You have some good ideas.’ Everybody thought I’d make a good elected official.”

Mattox joins Earl Jones of Pahrump and incumbent Lorinda Wichman of the Round Mountain region in the contest for the District I commission seat.

Early voting for the primary starts May 28. The position is for four years.

“I very much want to represent the people,” Mattox said. “I want to change, I guess, the way politics are done, the way we perceive them as being done.”

Mattox, 61, is making his first run for public office.

“The thing that really set me over the top on this was in 2015 when they voted in the largest tax hike in Nevada history with a very conservative Legislature and supposedly a conservative governor,” he said. “That was the final straw.

“That is when I decided, ‘You know what? Let’s get involved and do something. We’ve got to make changes here. We cannot let these elected officials keep doing what we don’t want them to do just because they think they know better than us. They need to represent us.’ Also, they need to govern for us instead of governing us, and that is what I want to do,” Mattox added.

He described what his style would be as a county commissioner.

Mattox described his plan involving the county, its many rural communities and Pahrump with the county’s population center being in the south.

He noted the county’s large and rural setting.

“I plan on going to as many of the town board meetings, as many of the rural events that I can,” Mattox said. “Actually, I went and bought an RV just to do this so I can spend time in the rural communities, find out what their likes and dislikes are, what their needs are.”

“Tonopah, you guys lost your hospital,” he said. “Why? That’s the only one in the area. How could we not find a way to keep that thing open. I am kind of beside myself on this.”

Mattox, retired from the Marine Corps with 21 years experience, also expressed concern about senior centers, veterans and the quality of roads.

“One of the things I want to help is with the vets and the seniors,” he said.

Mattox said as he has been out talking to people, roadways are being discussed as an issue.

“Our rural roads are not being attended to,” he said.

“I am talking about the dirt, the gravel roads. You drive down the road, and it shakes your car apart in small rural areas. So we need to do a better job of creating those and keeping those at least as smooth as possible.”

At the same time, he said he realizes that the county’s coffers are not unlimited.

Mattox said he has a degree in accounting from the University of North Carolina at Charlotte and a master’s degree in business administration from Chapman University in California. He said that through his career background as a chief financial officer for large companies, he understands budgets.

“I understand you can’t spend all of the money that all of the departments want,” he said. “You have to kind of prioritize your budgets based on your constituents, what the people in this case want. I don’t think our current commissioners are doing that.”

“When you go out and you talk to the people in the communities, nobody says ‘Wow, everything is going great, this is good,’” Mattox said. “They talk about what is bad, what is not being done. I think I can help by, when we sit down, prioritizing the budget, so we’re able to spend the money where the people want to spend, not where we the commissioners think it needs to be spent.”