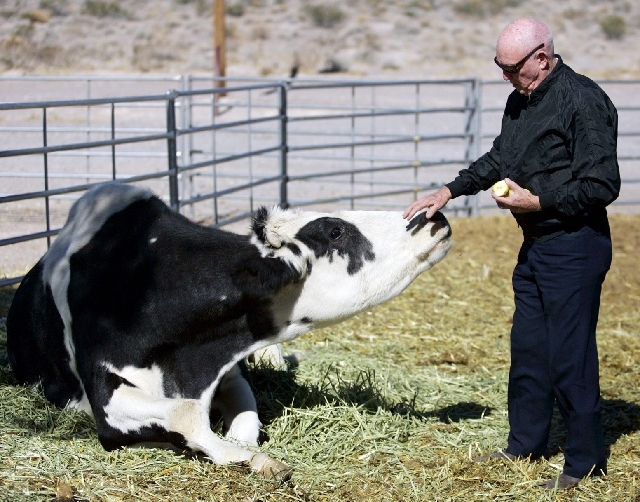 Amargosa Valley just got a little lonelier. One of its most celebrated residents has moved on to greener pastures.

Herman, the towering Holstein steer that helped draw tourists to the remote Longstreet Inn and Casino at the southwestern edge of Nye County, died July 25. He was roughly 8 years old.

Jim Marsh, Herman’s owner, decided to put down the 3,000-pound steer after Herman stopped eating and shed hundreds of pounds. A veterinarian diagnosed the animal with cancer of the eye.

The day before he was put down, Herman “stuck his nose up against the fence and we said a sad goodbye,” said Marsh, an animal lover and Las Vegas car dealer known for appearing in commercials with his daughter and grandson.

Herman spent his days munching hay, soaking up the sun and greeting tourists outside the Longstreet on their way to and from Death Valley. People were impressed by his massive size. At last measure, Herman stood 6 feet, 4 inches from hoof to withers.

Marsh believed Herman could be the tallest steer in the world. He thought about calling Guinness World Records, but never got around to it. Now he’ll never know.

Herman’s profile skyrocketed last year after he was profiled by the Review-Journal.

“It went viral,” Marsh said. “We got calls from across the country.”

Herman remained down-to-earth despite the attention, said Monica Chavez, the Longstreet’s manager, who was still so upset on Monday she could barely speak about him.

“He was just friendly,” she said. “He was more like a big dog than a cow.”

Chavez knew Herman since he arrived at the casino as a calf. Back then, he was about 4 feet tall.

The black-and-white steer was born at a nearby dairy, where he was briefly kept as a pet. He ended up in Beatty, where a friend of Marsh’s was fattening the animal for slaughter.

“You hate to see a pet steer end up on your dinner table,” Marsh said in October.

Marsh, 78, also is known in one-horse towns and cow counties for being a community booster and historic preservationist. He owns a bunch of rural Nevada properties, including the 60-room Longstreet near the California line.

He paid $600 to rescue Herman from the barbecue. Then he had the steer hauled to the Longstreet, built in 1995 on State Route 373 about 95 miles northwest of Las Vegas. There Herman grew and grew. Soon he was towering over Marsh, who is 6 feet tall.

Friends remembered Herman for his sweet disposition and sense of adventure. A couple of years ago he got out of his corral and wandered all over Amargosa.

But his mammoth size brought its share of problems. Herman suffered from arthritis, and his knees would swell from carrying all that weight. He got regular checkups and medication from a veterinarian who visited from Pahrump. Herman was loaded into a horse trailer and taken to the dairy to be weighed and have his hooves trimmed.

He didn’t suffer at the end, Chavez said.

“We were giving him medication and making him feel good,” she said. Putting him down “was bad, but it was the best thing we could do for him.”

Herman will remain where he spent most of his life. With the help of a backhoe, Marsh had him buried near the Longstreet’s RV park.

“We’ll put in a little headstone for Herman,” Marsh said.

The steer is survived by his corral mates — burros Bambi and Jill, and one nameless goat.