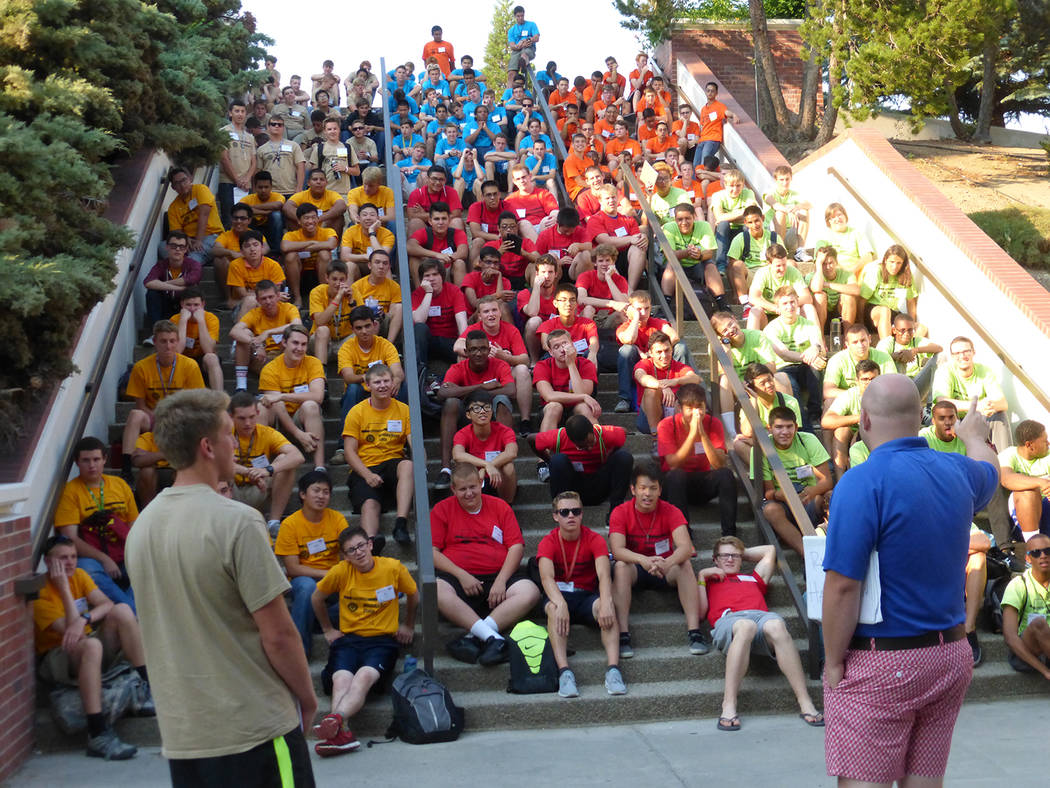 Special to the Pahrump Valley Times This photo, provided by the American Legion, shows a group of Boys State program participants, each divided into fictional cities represented by separate colors of T-shirt. The 2019 program is now open for registration. 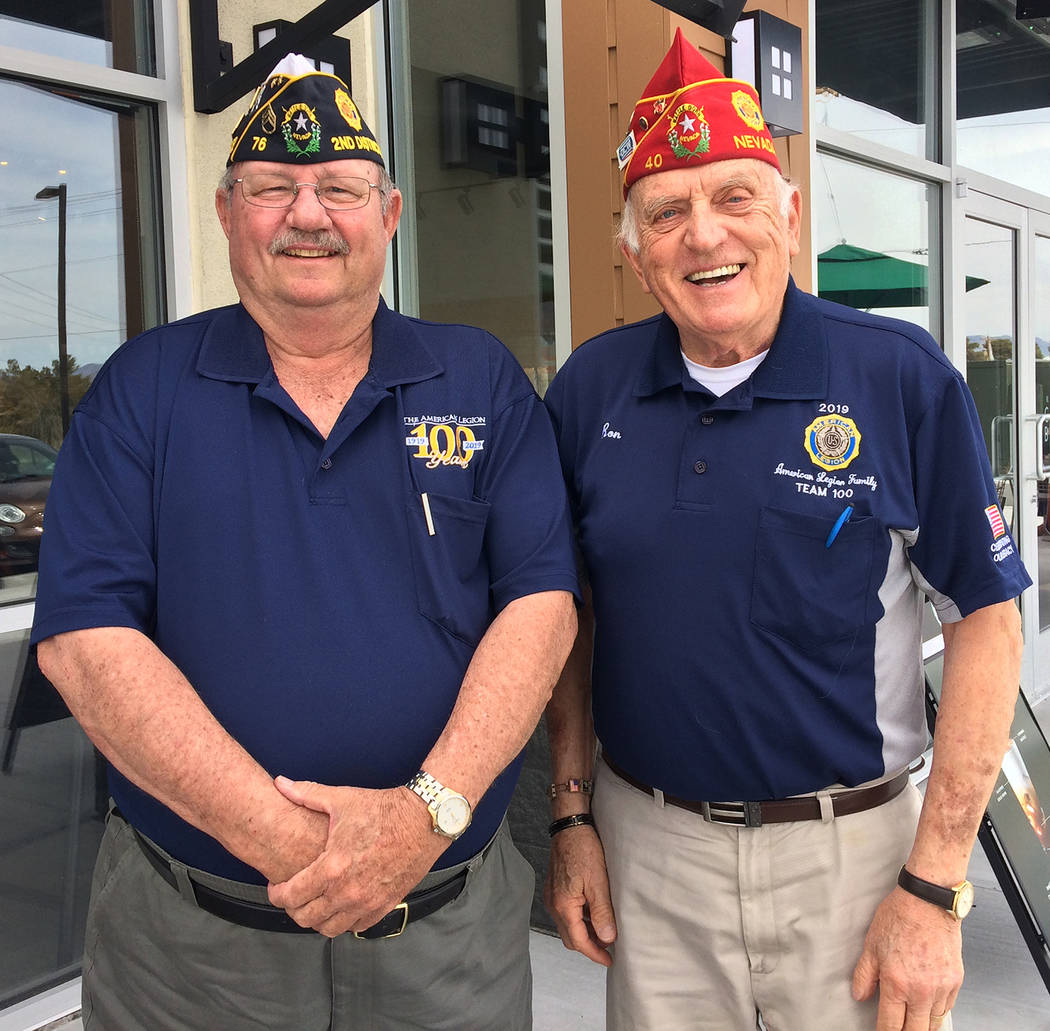 Robin Hebrock/Pahrump Valley Times Mike Shepheard, at left, and Ron Michalski are two members of the American Legion who are striving to make the organization even bigger and better. Locally, the two wish to see more participation in Pahrump's post #22. 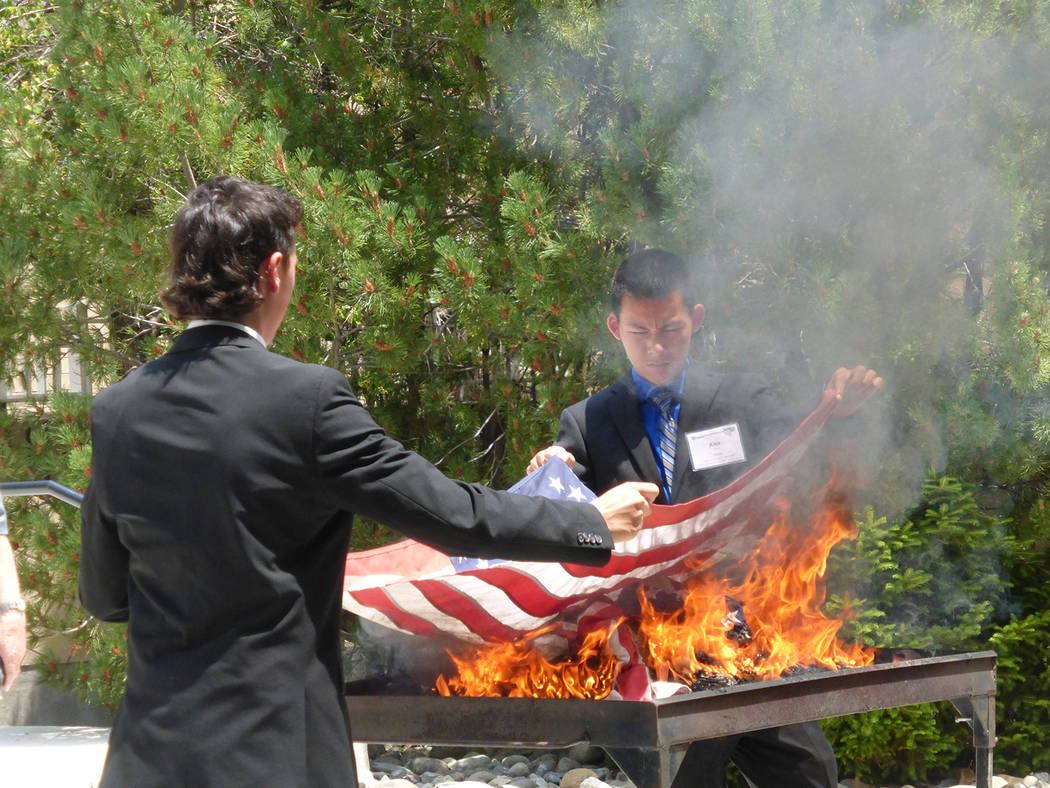 Special to the Pahrump Valley Times At a past Boys State session in Carson City on the Capitol Grounds Veterans Memorial, a flag retirement ceremony was presented by American Legion Post #4 Carson City, with all Boys State delegates assisting.

For many former military members, retirement from the U.S. armed forces does not signal an end to their service to the country. Rather, it is simply a shift in focus, leading them to other avenues of service and volunteerism.

There are many ways in which veterans can assist their communities and fellow veterans, with a wide array of organizations one can join to help fulfill that desire to continue serving. One such organization is the American Legion and here in Pahrump, the group is striving to expand.

Mike Shepheard is a member of the American Legion of Nevada, Sergeant at Arms and the 1st Vice Commander of District 2, Nevada, which encompasses Pahrump as well as many other areas in the southern part of the state.

He and National Executive Committee Member Ron Michalski made a special trip to the valley last month with the mission of raising awareness for the American Legion and its local post #22.

“We have learned that Pahrump is one of the fastest growing communities in the state and we’ve been wanting to do more with the community, we have just been unsure of how to go about doing it. But we know there is a large veteran population here and we, the American Legion, have so many programs that would benefit the veterans. And that is our main purpose, what can we do for the veterans and how can we get more involved in the community projects?” Shepheard detailed.

Michalski provided a breakdown of who can become an American Legion member at present, but he also made sure to note that those parameters could be changing in the near future.

“So who can join the American Legion? Right now only certain wartime periods qualify, if a veteran has served at least 24 hours active duty in one of those periods they can join,” Michalski explained.

However, Senate Bill 504 is now before Congress and that could alter the membership requirements.

“We want to add anybody who has served 24 hours active duty since 1947 to present day, so we can cover that Cold War period, a time that was supposedly not war but we lost over 1,600 military personnel during that time, so it was kind of a war,” Michalski stated. “Hopefully Congress will see this and make that change.”

“We have an auxiliary, family members of those who have served,” Michalski continued. “Their veteran family member must be or have been an American Legion member to join the auxiliary. We also have the Sons of the American Legion as well as the a group called the Legion of Riders, which is a motorcycle group.”

The American Legion stands on four distinct pillars, those of veterans’ affairs and rehabilitation, national security, Americanism and children and youth. With these pillars, the Legion has created an extensive variety of programs to serve the purposes behind each pillar.

A bevy of programs

There are so many programs offered through the American Legion that it can be difficult to touch on them all but Shepheard and Michalski managed to hone in on a few they felt were particularly special when it comes to supporting youth and inspiring the next generation of patriots.

Two such programs are the American Legion’s Boys State program and the auxiliary’s Girls State program. Current juniors in high school are now eligible to register for the 2019 program, which will run from June 16 to 22.

Program participants are bused to the Reno and Carson City area to learn all about how government and its various branches function.

Not only are the students educated on the process, they actively participate in the different aspects of government, such as forming bills and passing them as would be done in Congress and preparing a mock case to go before the state Supreme Court.

Both Shepheard and Michalski agreed, these are some of the most impactful when it comes to youth programs and they have highly enjoyed their time as leaders of the Boys State program.

“The slogan for the program says it all, ‘It’s a week that shapes a lifetime’,” Shepheard said, while Michalski added, “They go up as young boys and they come back as young men a week later. What a difference. I can see it and that is such a gratifying experience.”

The American Legion’s Oratorical Scholarship program is another the duo wants to get the word out about. The oratorical contest offers increasing cash prize amounts, which multiply as the speaker moves forward in the contest. At national, the top prize last year was an $18,000 scholarship.

Several American Legion posts support Scouts of America troops and there are junior shooting sports and youth cadet law enforcement programs as well. The American Legion also incorporates an amateur radio club and a baseball program, along with providing a family support network, support for homeless vets, the Legion College, a child welfare fund and much, much more.