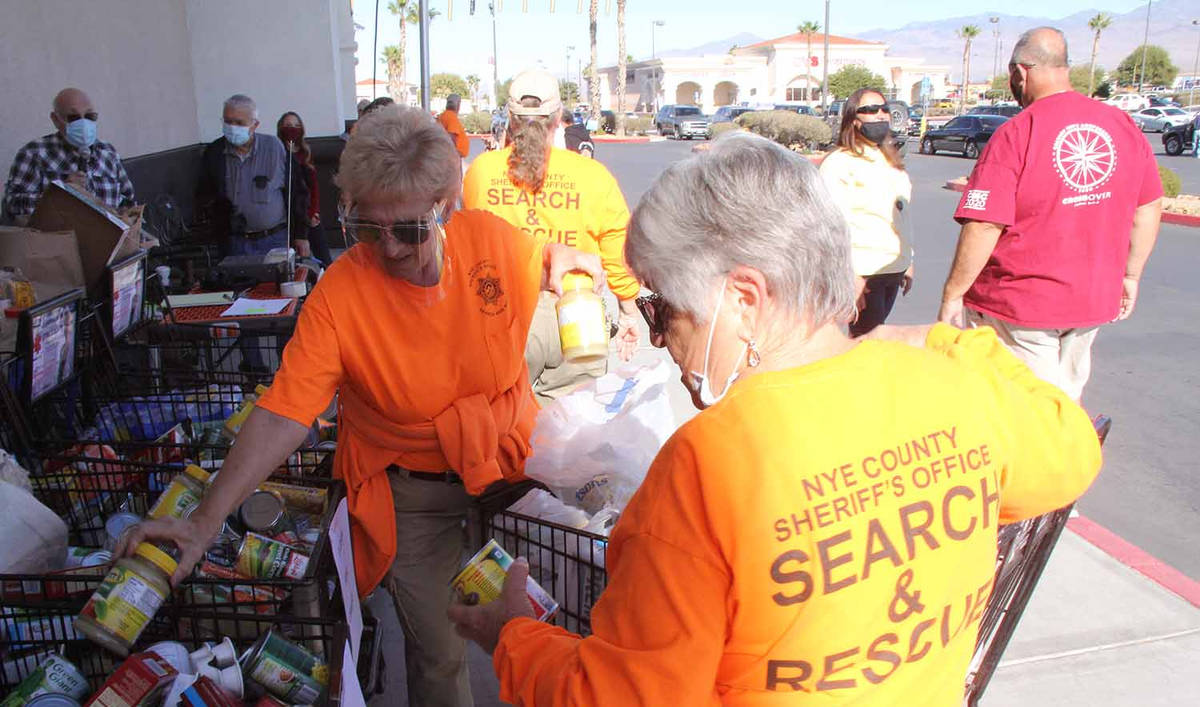 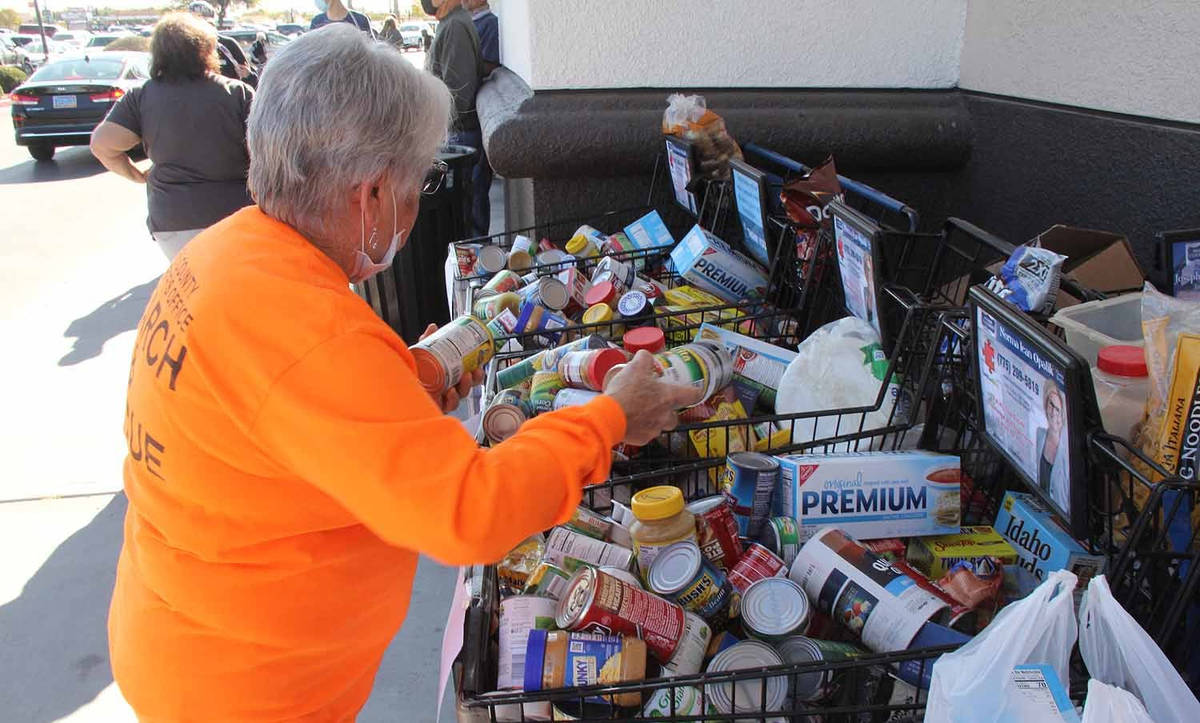 Photo courtesy of Nye County Search and Rescue Upward of $2,600 and numerous carts of food were collected during the 15th annual community food drive hosted by Karen Jackson's KNYE 95.1 FM radio station. All of the food items are destined for Heritage Bible Church, Faith Fellowship, U-turn for Christ and Pahrump's VFW Post 10054.

Thanks to the efforts of KNYE 95.1 FM station owner Karen Jackson, this month’s annual food drive exceeded her expectations.

The event was held near the front of the entrance of Albertsons grocery store on Saturday, Nov. 21st from 10 a.m. to 2 p.m.

“This was the best food drive that we have had since about 2008,” Jackson said following the event. “I usually get about $1,500 in cash, but today we got $2,600, and about 27 baskets of food. We had four baskets of turkeys and hams, and we had about 24 other baskets of food. I couldn’t be there because I was working the board at the station. The food goes to Heritage Bible Church, Faith Fellowship, U-turn for Christ Church and the VFW, so everything I do is local.”

Distribution of food and funds

Jackson also said that some of the funds that were raised will go to area organizations, once again this year.

She also lauded the efforts of those who assisted in the endeavor.

“Some of the money that came in was designated for the VFW, and they got about $1,200, and the other three food banks got about $500 each. This was a huge food drive, and I think that the reason we did so well was due to COVID-19, because we haven’t had a lot of fundraisers. It just really went well and I am so grateful to Joe Talbot for being such a great sport. I also want to thank Judge Wanker, Linda DeMeo, Valerie from Saitta Trudeau, and a group of workers from U-turn for Christ Church, Nye County Search Rescue, and engineer Tony.”

Although Jackson typically is on site at previous food drives, a serious medical condition prevented her from doing a live remote at the location this year.

“I almost died in September,” Jackson said. “I ate a bacteria, and it attacked my liver, so my liver was actually poisoning me and I was in the hospital for eight days. I just recently got off of a daily IV, and I’m doing really good but I get tired really quick. The doctor said it was going to take about three or four months to get better. So Joe Talbot went out and was live, while I was on the board. They knew I couldn’t be there because I don’t have the stamina right now, and they know I have been really sick and they all stepped up to the plate. They really did.”

With the holiday season now in full swing, Jackson said she’s reminded of the late radio legend Art Bell, whom she purchased the radio station from.

Additionally, she spoke about how she thinks Bell, who passed away in 2018, would be reacting to a general election year amid a global pandemic.

On a final note, Jackson also made sure to give thanks to the community, who helped to make the food drive a complete success this year.

“The community really stepped up in helping all of these food banks,” she said. “This was my 15th food drive and every year the community has brought me to my knees, but this one brought me to tears. I also want to give a big thank you to Albertsons for letting us be there, and a huge thanks to Nye County Search and Rescue, as well as Little Caesars, who provided lunch for all of the elves.”