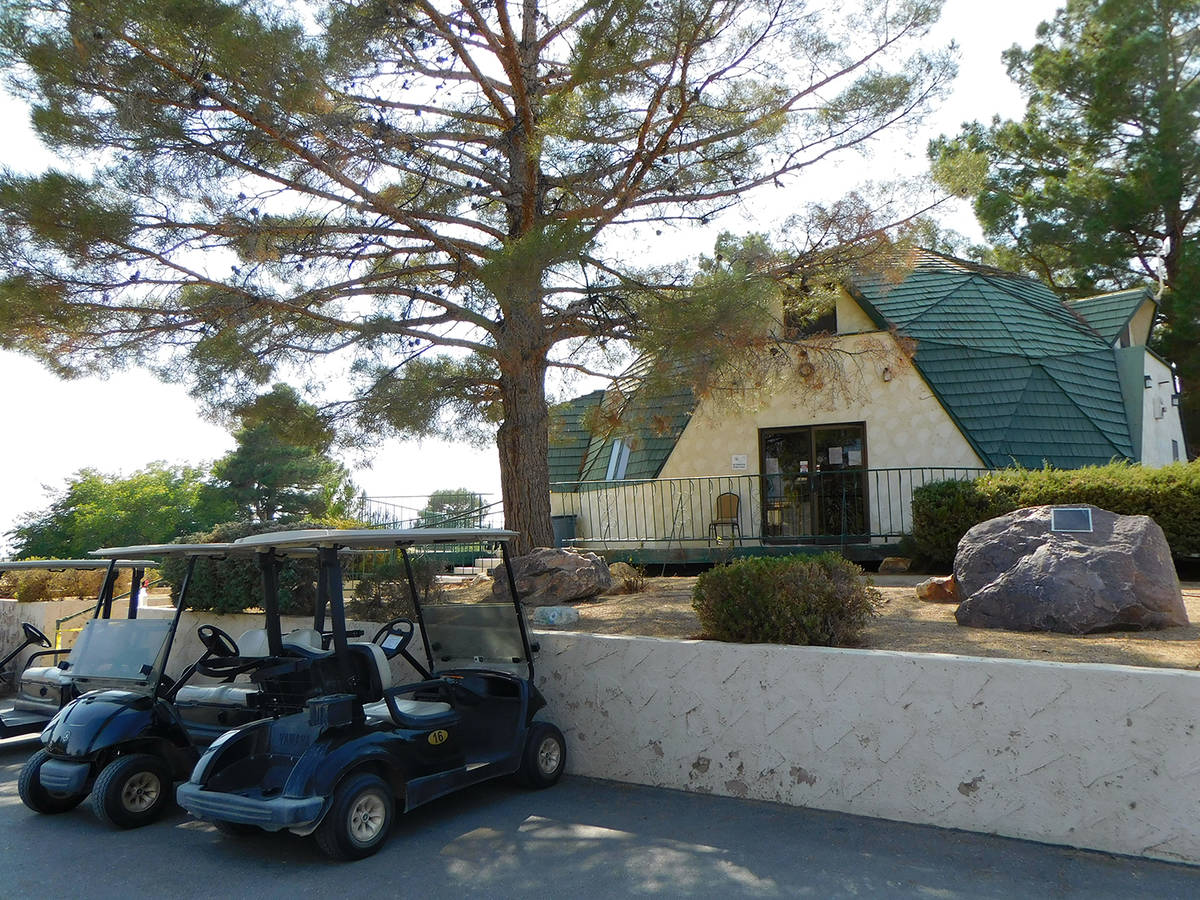 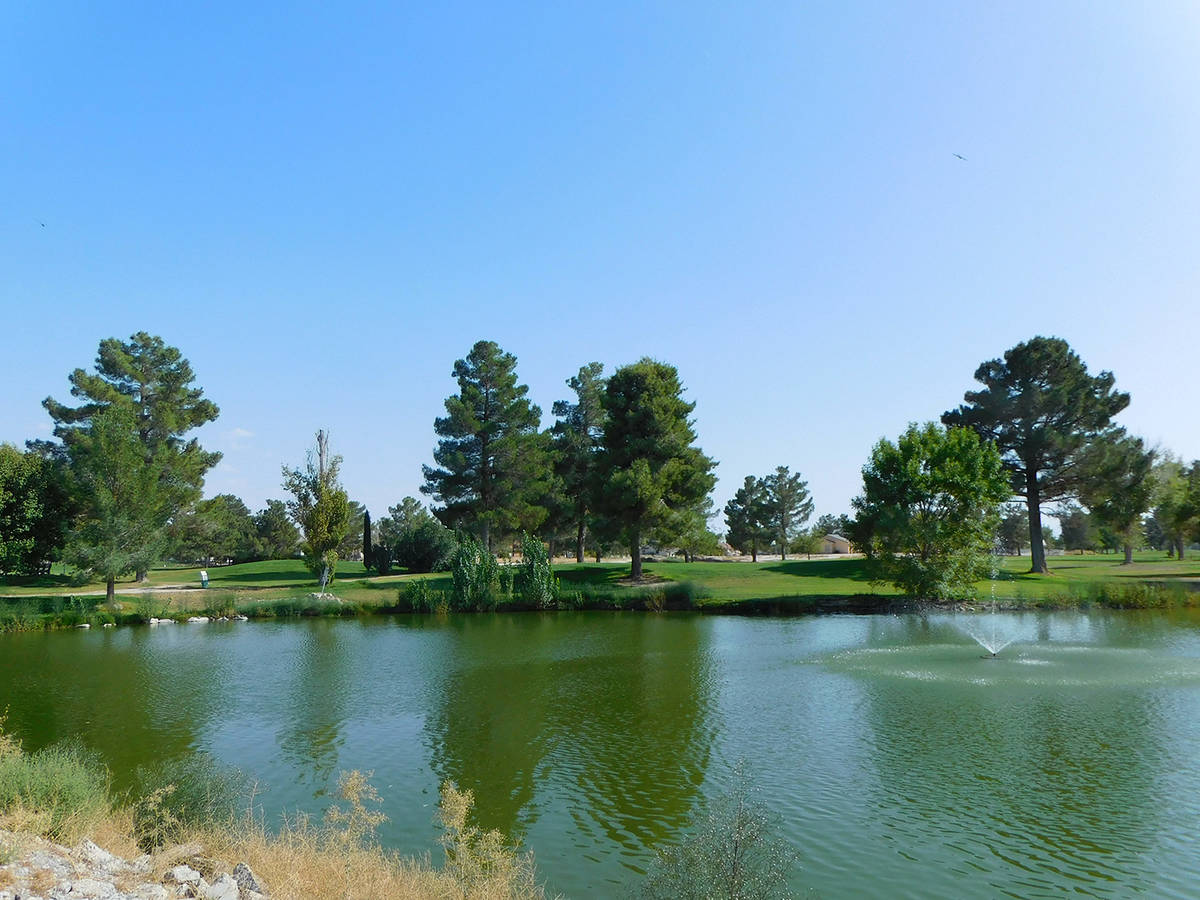 Robin Hebrock/Pahrump Valley Times A view across the small lake for which Lakeview Executive Golf Course is named. 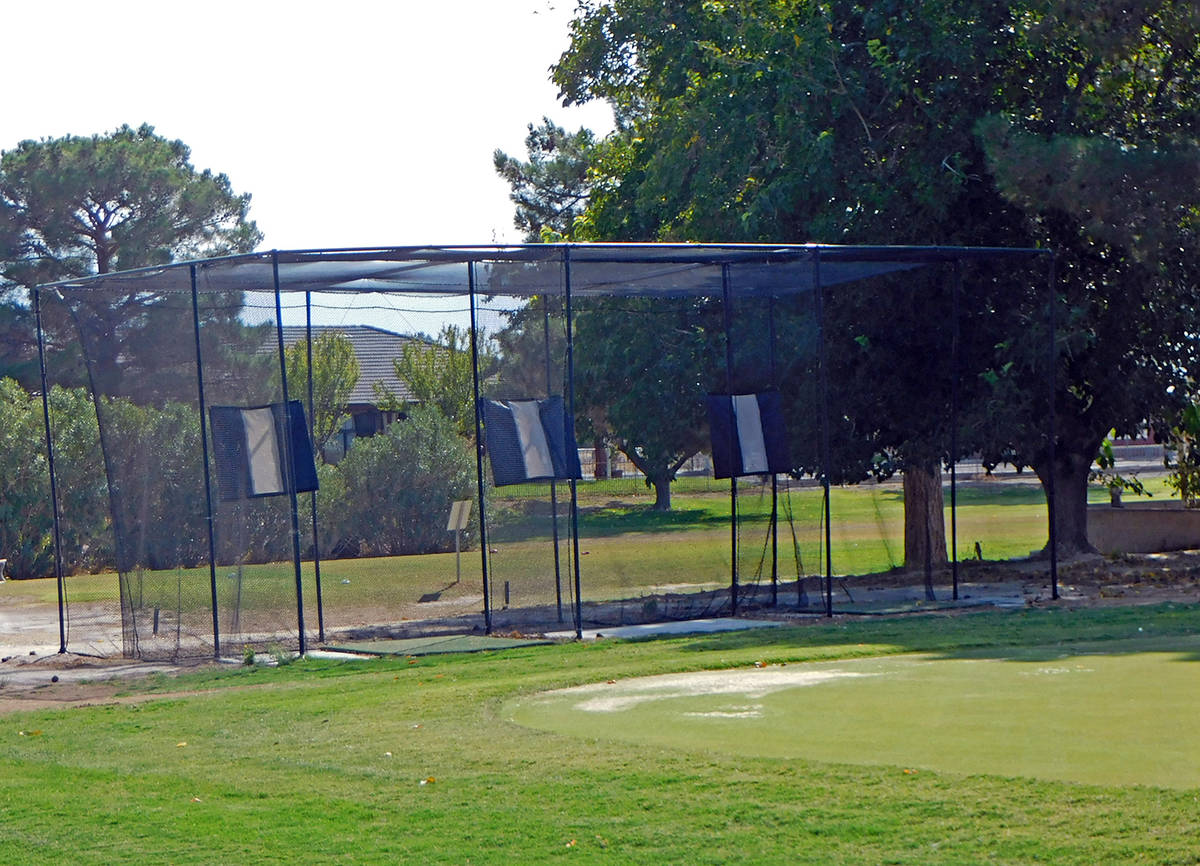 Robin Hebrock/Pahrump Valley Times The addition of a three-stall driving range is just one of the improvements that CourseCo has made at Lakeview Executive Golf Course in the past year.

In December of 2017, the Nye County Commission narrowly approved the purchase of Lakeview Executive Golf Course, and while the financials involved with running the course have seen some improvement since that acquisition was made, the operation is not quite on par with some commissioners’ expectations.

Representatives with CourseCo, the company selected in December 2018 to operate and manage the golf course on behalf of the town of Pahrump, went before the commission during its Tuesday, Sept. 15 meeting to present their annual plan for the course, which outlines an expected loss to the town of Pahrump of $130,000 over the next 12 months.

Adam Pohll of CourseCo headed the presentation, starting off with an overview of the previous fiscal year.

“Looking back to fiscal year 2019-2020, which is our first full year of operations, despite being closed for 35 days in the spring of 2020 due to COVID-19, we were able to exceed our revenue goals and come in under our expense goals,” Pohll told commissioners with evident pride. As budgeted for the fiscal year 2019-2020, the golf course was projected to cost the town $190,000 but the actual figures came in at just $148,000, a full $42,000 less than had been anticipated. “So a very good year financially for us,” Pohll stated.

He then turned to the improvements and investments that have been made at the course over the past 12 months, which included construction of a new practice putting green, a large short-game practice area and a three-stall driving range. “This area was previously just a dirt lot next to the clubhouse and now it’s a very nice practice area that has improved the aesthetics of the whole entire area. We’re very proud of this project,” Pohll said.

New equipment purchases and maintenance upgrades were part of the investments made in the last year as well, with a new fairway mower, new recycled water flow meter and upgrades to the irrigation system all listed.

Pohll said the goals of CourseCo for the 2020-2021 annual plan remain much the same as those of the previous year, focusing on improving the course conditions, providing a quality, affordable experience and offering varied programming for the entire community, including non-golf events. Of course, the plans for the prior fiscal year’s non-golf events went awry, thanks to COVID-19 but Pohll said he is looking forward to the time when restrictions are lifted and CourseCo can begin to host activities such as Easter egg hunts, car shows, education programs and more. “It’s just a great way to introduce new faces to our facility who may play golf or may not play golf,” Pohll said.

With a large soccer program in town already, commissioner Debra Strickland made the suggestion that the course look into providing foot golf as well. Pohll said he would look into the financial figures involved in that and bring those numbers back to the commission for future consideration.

Capital plans for the next year center on repairs and equipment purchases, to include a repair of the clubhouse deck, tree removal and procurement of a new greens mower, turbine blower and utility cart.

The costs to the town were something of a sore spot for certain commissioners, including chairman John Koenig and commissioner Donna Cox, who had both been against the idea of acquiring the golf course in the first place, and commissioner Leo Blundo, who joined the board after the acquisition was made and therefore had no say in that matter.

“When are you going to get profitable?” Koenig asked immediately after Pohll finished his presentation. Strickland gave something of a sardonic chuckle before Blundo took his turn to speak.

“Where is the difference coming from?” Blundo questioned, referring to the operating deficit. “I just don’t know what business I can operate and go $148,000 in the hole… That’s a lot of dough. Where’s the money coming from?”

Nye County Comptroller Savannah Rucker explained that the town’s room tax revenue, paid by those staying in local hotel rooms, had been identified for covering the costs associated with giving the course time enough to improve its grounds and facility so that it would at some point in the future be able to turn a profit. “It’s not something that’s going to happen overnight,” Rucker stated.

Strickland chimed in to note that of the $130,000 deficit that is projected for fiscal year 2020-2021, $67,000 was going to be reinvested in the property via repairs and equipment purchases. A further $65,000 of that amount is the contract cost for CourseCo’s management of the course.

“I think we’ve made good strides in the short amount of time that we’ve been there,” Pohll said in response to Blundo’s concerns. “Yes, it’s slow, and yes, it’s not easy but I think we are making good strides.”

Obviously not assuaged, Blundo continued, “It’s very concerning… I need this to break even. We need to get close to zero… Otherwise it becomes something that, I don’t know if it’s palatable anymore.”

Just before the item came to a close, Cox jumped in to say she understood that it could take several years of investments in order to get to a point where the course was self-supporting but she was keen to see more progress over the next year, otherwise the future of the course could be in question.

“I did vote against it but it is what it is… We’re here and I will support it for at least another year. If it doesn’t show more improvement next year, I can think of a very good use for that property and I think we could get a buyer,” Cox said.

Blundo made the motion to approve the annual plan, which passed with all in favor.

Lakeview Executive Golf Course is located at 1471 E. Mount Charleston Drive S. Reservations can be made by calling 775-727-4040. For more information about the course visit www.lakeviewgolfpahrump.com