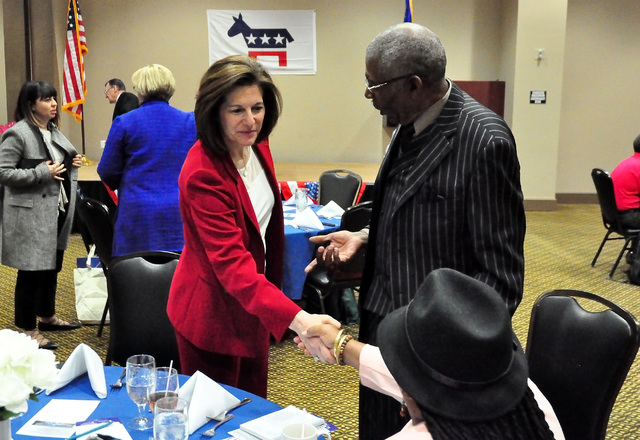 With election season underway, Nye County Democrats found cause to gather for a Roosevelt-Kennedy dinner on Saturday night.

The annual fundraiser for the Nye County Democratic Central Committee brought a number of candidates for Congress, the Senate and Nevada Assembly to Pahrump.

Fresh off the debate that took place at the Pearson Community Center in North Las Vegas on Thursday, Democratic candidates for the 4th Congressional District Lucy Flores, Ruben Kihuen and Susie Lee made their cases at the event.

The three candidates, who will challenge incumbent Republican Congressman Cresent Hardy in the June 14 primaries, took to the stage for a couple of minutes to talk about their campaigns.

In her address, Flores, a former assemblywoman, said she was the most progressive candidate and touted her endorsement from Democratic presidential candidate Bernie Sanders.

“I’m the person who is going to work the hardest for you because your issues matter to me,” Flores said.

Las Vegas philanthropist Susie Lee, who has been outpacing Flores and Kihuen in fundraising, encouraged those in attendance to fight for opportunities.

Lee also said she will focus on economic development in Pahrump, if elected.

“I believe that the Congress of today is leaving the middle class behind,” she said.

“I haven’t talked about making people’s lives better, I’ve rolled up my sleeves and have had a real impact on people’s lives. That’s the type of leadership I think we need more of in Washington, D.C.,” she said.

Kihuen, a state senator who represents Nevada’s 10th District said Democrats are fighting for the American dream “every single day.”

“That promise that if you come to this country, or you live in this country, and you are willing to work hard, to sacrifice, to play by the rules, that you can become anything and anyone,” he said.

Kihuen got endorsements from 13 labor unions, including the Culinary Union.

The 4th Congressional District includes six rural counties, including Nye and North Las Vegas, where the majority of voters live.

In the letter, Reid endorsed Kihuen and called him “a fighter for progressive values.”

“Our state is once again poised to be a key battleground in 2016 from winning Nevada for our presidential nominee to reclaiming our majorities in the state Legislature, your work will be pivotal to ensuring we can celebrate Democratic victories on election night,” Reid said in a statement.

A keynote speaker of the event, Catherine Cortez Masto, is running for the outgoing Reid’s seat.

Cortez Masto, who has three Democratic challengers for the primary, is expected to face with Republican Congressman Joe Heck in November’s general election for the seat.

If elected, Cortez Masto will be Nevada’s first female senator and the first Latino senator in the U.S. history. She served as attorney general for the state of Nevada for eight years.

“I’m not doing it to make history, I’m doing this because it’s time we started solving problems and getting things done,” she said. “And it’s time for Washington to be bipartisan and create economies and solve those problems that work for everyone.”

Cortez Masto cast herself as “a problem solver,” and criticized partisan bickering in Washington, D.C.

“For too long we have watched as those in Washington have failed the American people, (and) refused to take up the challenges that we face every day,” she said.

She called for raising minimum wage, equal pay for equal work, tearing down the barriers to the middle class, fighting against “job-killing trade deals” and anti-union policies and passing comprehensive immigration reform.

Nevada brothel owner Dennis Hof, who recently filed for the state Assembly District 36 as a Libertarian, also attended the event.

Hof told Nye Democrats that he is not a career politician and he doesn’t want to be one.

“I’m not taking any money,” Hof said. “I don’t want anybody’s money. Special interests will not control me at all. I will do the right thing for you, we have to make some changes.”

Hof asked the public for support: “If you don’t have anybody, I am your guy for sure.”