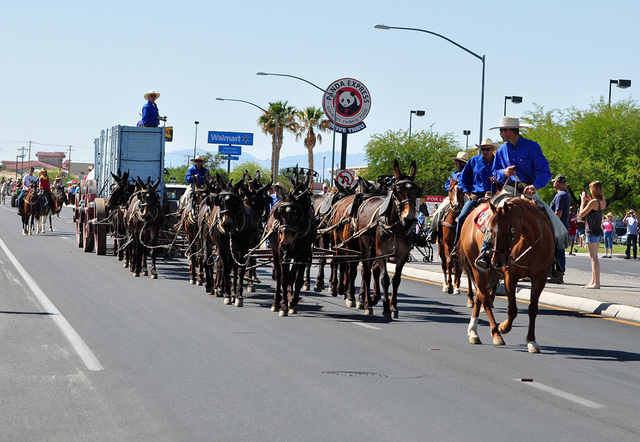 A Pahrump western-themed tradition returns to town starting today and runs through Sunday.

The annual Wild West Extravaganza and Bluegrass Festival brings back food, fun and entertainment to Petrack Park, beginning at noon. Vendors’ booths open on Saturday and Sunday at 8 a.m.

The tradition was started by the late Bob Baker more than a decade ago with musical performances, trail rides, games and more.

Parade Chair Janice Maurizio said more than 30 vendors have signed on to participate, including a big selection of food vendors.

Entertainment will be constant throughout the three-day event.

“We will be doing a melodrama courtesy of the Shadow Mountain Community Players and there will be four shows the entire weekend,” she said. “One will be on Friday night, two will be on Saturday and one on Sunday.”

Maurizio said this year the extravaganza will have a group from Southern California for the first time.

“Guns and Garters are a California group of gunfighters,” she said. “They will be in the parade and they will do three shows on Saturday and three shows on Sunday. I understand the grand finale is going to be very grand. They are really looking forward to coming out and participating.”

Additionally, Maurizio said the entire gang can get itchy ‘trigger happy’ at any given time throughout the weekend.

“During the extravaganza, if you hear the words ‘Fire in the Hole,’ that means you may want to take cover because there’s going to be some gunplay with the gunfighters,” she said. “They will also be deputizing the kids in the park and give them their own little badge and swear them in. They also do a gun safety exercise before every performance so everybody knows what’s going on.”

Kicking off Saturday’s events will be the popular parade portion of the extravaganza, which starts at 9:30 a.m.

Though there’s more than 20 entrants so far, Maurizio said it’s possible to take on additional entrants by Friday.

“The parade will start out with an all-western theme at the beginning and then move into modern times,” he said. “If someone or a group wants to participate in the parade, I can still squeeze them in if they call me on Friday. If they are going to dress in western regalia, they’re going to have to let me know because right now I’m planning on who will be where in the parade.”

Visitors can look forward to numerous activities and entertainment.

One of the more popular events are the outhouse races.

“This year we have the Sheriff’s Office vs. the Fire Department and the Pahrump Boy Scouts are also participating, because they made their own outhouse. It will take place at 1 p.m. on Saturday. We may have another run at 3:30. There will be prizes, plus bragging rights.”

The 4-H Club will set up a ‘Hay Dig’ for children to frolic in.

“The organizers put something underneath all the hay and the children go through the hay and try to find it,” she said. “It’s just like looking for a needle in the haystack but of course there will not be needles. It should be a lot of fun for the kids.”

Other forms of entertainment will be the ‘Crazy Legs’ competition.

“That’s when the men get to show their legs off,” she said. “Some decorate their legs or whatever, but it’s going to be a lot of fun and hilarious.”

One caveat Maurizio noted is that Highway 160 will be temporarily closed to traffic during the parade.

“The Nevada Department of Transportation will close off 160 to regular traffic until the parade is over on Saturday morning,” she said. “They will be closing it off at about 9 a.m. because the parade will start at 9:30. There will also be a youth rodeo and barrel racing on Saturday night at McCullough Arena right next to Petrack Park.”