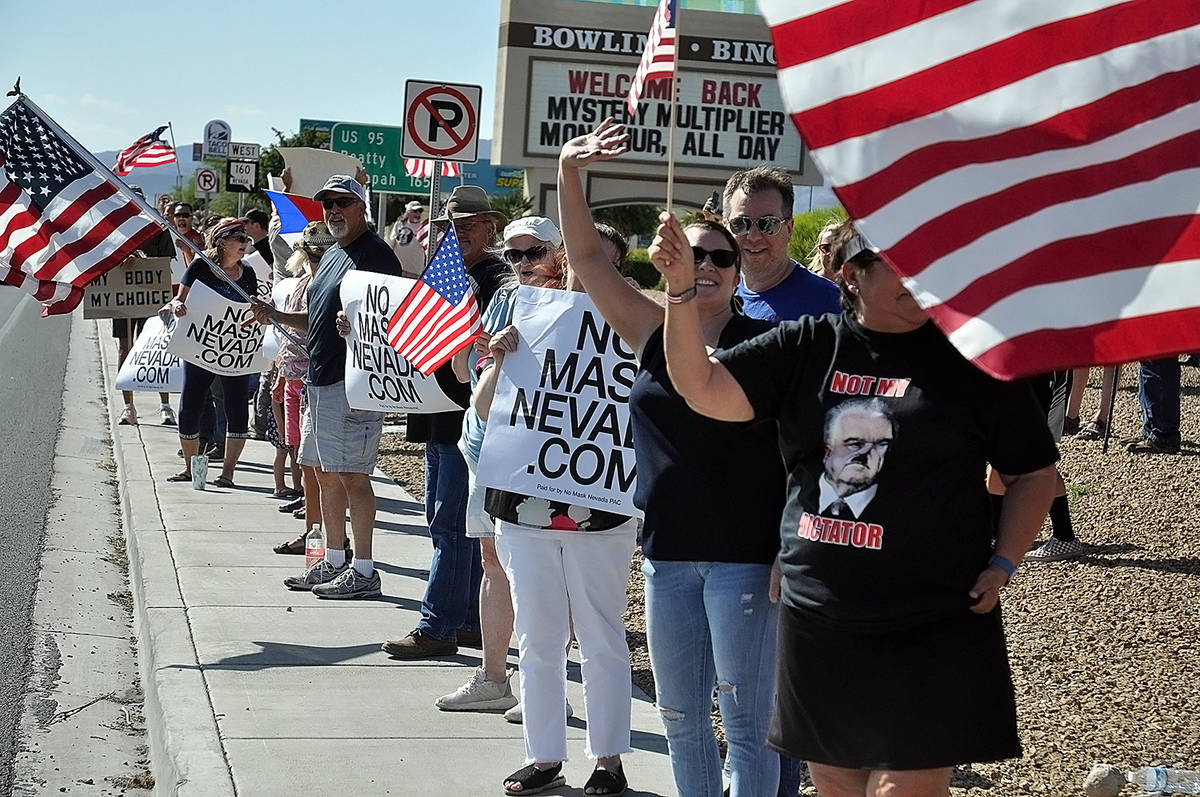 Horace Langford Jr./Pahrump Valley Times Several dozen area residents gathered along Highway 160 to express their displeasure with Governor Steve Sisolak's emergency declaration for all Nevadans to wear face masks in nearly all public spaces to help prevent the spread of the COVID-19 virus. 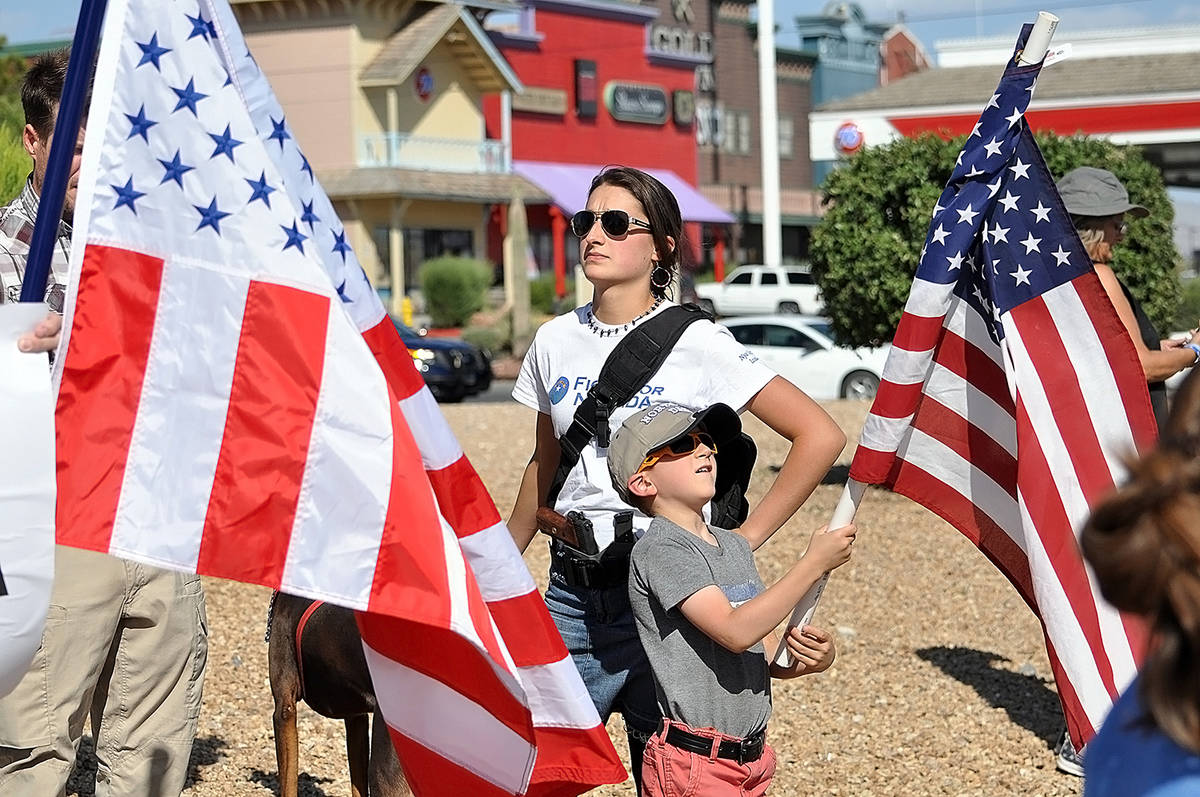 Horace Langford Jr./Pahrump Valley Times Many of those who attended the Monday, June 30 anti-mask rally inexplicably were carrying firearms. Upward of 60 individuals attended the 4:30 p.m. event, where social distancing was visibly nonexistent. 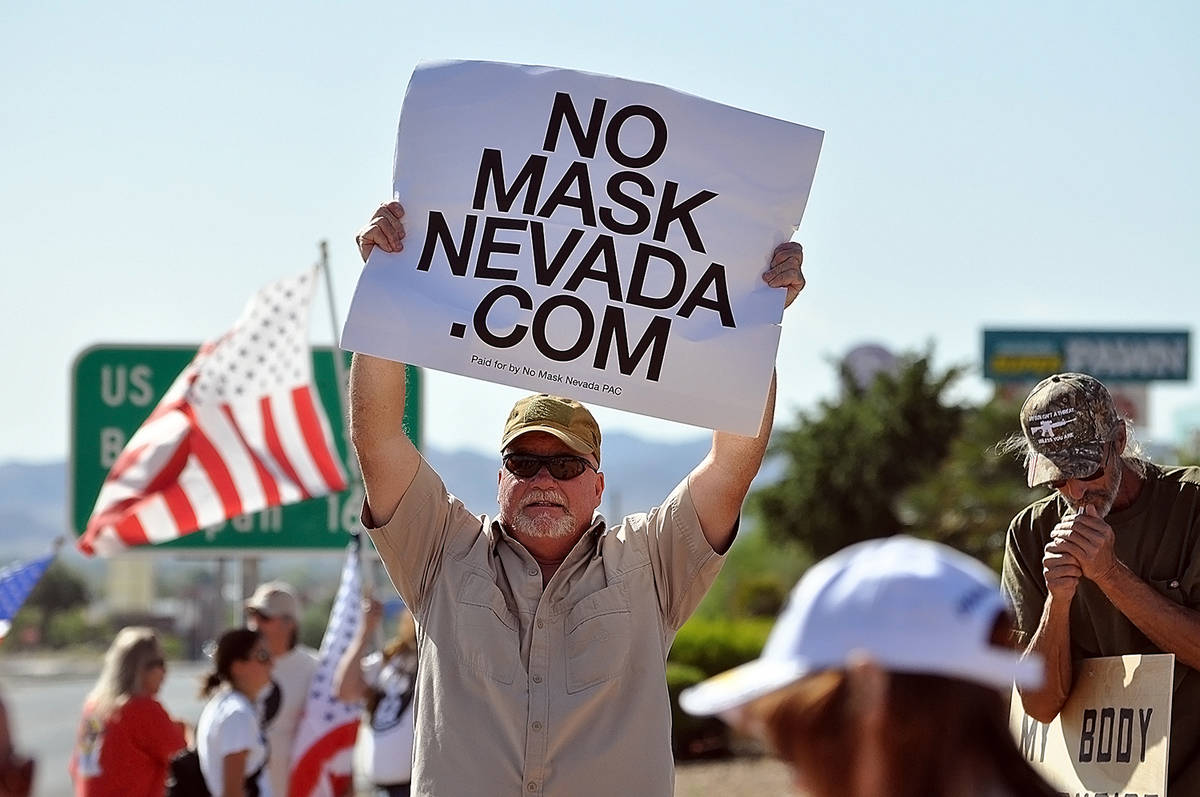 Upward of 60 individuals, many of whom were bearing firearms, gathered at the intersection of Highways 160 and 372 on Monday, June 30th to express their displeasure of Governor Steve Sisolak’s emergency declaration requiring Nevadans to wear face masks in public to help avoid the spread of the COVID-19 virus.

The 4:30 p.m. event was organized by Melissa Blundo, chairman of the recently formed No Mask Nevada PAC (Political Action Committee).

Blundo is the wife of Nye County Commissioner Leo Blundo, who also attended the event, where social distancing did not appear to exist, against the advice of health experts.

“It is really just PAC that wants to protest the governor’s mandate for everyone to wear masks,” Melissa Blundo said. “He kind of circumvented due process, by not allowing our Legislature to vote on things and the governor doesn’t make laws. The legislators make laws.”

Health experts agree that wearing a face covering is just one way to help avoid the spread of the virus, as does social distancing.

“I realize that people get sick and I was one of them,” Blundo admitted. “I was in bed for four days. It’s unfortunate, but we’ve had a lot of different viruses come into the world. The only way we actually build up an immunity is by exposing our bodies to those things.”

Sisolak’s mandate does have some exceptions, including people with medical conditions that make it difficult to breathe, those with a disability that prevent them from wearing a face covering and children under 10 years of age. According to the Nevada Health Response’s website, children ages two to nine are encouraged to wear a face mask, while children under the age of two should avoid wearing a face mask due to the risk of suffocation.

“This is a long-term movement that is designed to defeat elected officials who are hostile to our constitution and our freedom,” said Ian Bayne, the group’s vice-chairman, in a press release announcing the PAC’s formation. “Masks are a political issue of choice and not one for a governor to mandate with the stroke of a pen.”

“Bayne, 46, is a former morning talk show host in Illinois and former state GOP chartered PAC chairman in Massachusetts, where he worked on dozens of political campaigns as well as high profile political efforts, including leading the ‘draft Romney’ for governor effort of 2002, where he was one of three individuals given credit for Romney’s successful defeat of Governor Jane Swift, an incumbent GOP governor,” the release states.

The organization is planning to organize future protests against wearing masks and is targeting politicians that are pro-mask for the 2020 election cycle.

A matter of choice

Melissa Blundo insists it’s about an individual’s right to choose. “What this really is to me, is two things,” she said. “Number one, the governor circumvented due process and I understand it’s under an emergency directive, however, it is my choice to protect my health and the health of my family how I see fit, and it’s not for the government to tell me. It has to do with my personal belief and our freedom in America.”

Blundo also spoke of a situation where she said she was confronted by someone who criticized her for not wearing a mask in public.

“I actually got yelled at because I didn’t have a mask on yesterday,” she said. “I actually do have a medical condition to where I fall exempt under the medical exemptions. Somebody screamed and yelled at me and told me to go “F” myself and that I was hurting other people, and all kinds of things like that. Yet they didn’t ask me once whether I had a medical condition where I wouldn’t have to wear a mask.”

According to information on the CDC’s website, “Cloth face coverings may help prevent people who have COVID-19 from spreading the virus to others.”

Leah Aldridge has been a local resident since 2006.

It’s up to the governors

During a phone call to governors, back in March, President Trump said governors would “call their own shots” in respect to handling the virus.

“I think that the mandate is unconstitutional on its face, and I also think that if you are to wear a mask, it should come as an order from a medical professional,” she insisted. “I don’t think any of these business owners are medical professionals. Also, I have an existing condition that prohibits me from wearing a mask. I could literally die from wearing one. It’s something that I feel very strongly about.”

Aldridge also said that if she contracted the virus, she would simply stay at home.

“Healthy people don’t need masks,” she noted. “Sick people would need a mask. The coronavirus is like the most common virus that there is from what I’m told. I have two friends that are virologists. If you have the common cold, you can test positive for the coronavirus, because the common cold is a coronavirus. The common flu is a coronavirus. The test that they are doing doesn’t differentiate between COVID-19, the common cold and the flu. If you can show me the NRS statute that I have to wear a mask, and harm myself by doing so, then we are going to have a serious problem. If I was barred from a business for not wearing a mask, I would contact my lawyer. It’s in the governor’s directive that if you have a medical issue that prohibits you from wearing a mask, you don’t have to. I fall into that category.”

Resident Michael Runion said he joined the gathering to protest what he termed the use of force regarding the governor’s emergency directive.

“I’m not anti-mask, I am anti-force,” he noted. “I don’t believe the governor has the unilateral right to issue an executive order to enforce an emergency declaration on the people, without the people’s consent. I absolutely agree that people are dying from COVID-19, but like I said, I am not anti-mask at all. I am anti-using your business license to force you into making a choice. It’s your body, it’s your choice.”

Runion also said that he would have no problem complying with wearing a mask in a public setting.

“They are a private business and they are more than welcome to do that,” he said. “They’re a private business and I have no reason to put their license at risk. I would wear a mask, absolutely. But I am out here because I don’t believe that the government should be forcing people to wear something or not wear something, to put something in their body or not put something in their body. It’s their body, it’s their choice, and I do practice social distancing.”

Moreover, during remarks at the University of Texas Southwestern Medical Center on Sunday, June 28th, Vice President Mike Pence encouraged all Americans to wear face masks while out in public.

“If your local officials, in consultation with the state, are directing you to wear a mask, we encourage everyone to wear a mask in the affected areas,” Pence said. “And where you can’t maintain social distancing, wearing a mask is just a good idea, and we know from experience, will slow the spread of the coronavirus.”

In Nevada, 19,733 cases have been confirmed as of Thursday, resulting in 525 deaths, according to state data.

Locally, as of Wednesday, July 1, Nye County officials have reported 114 confirmed positive cases of COVID-19, which was an increase of four from the previous day.

All four cases were in Pahrump.