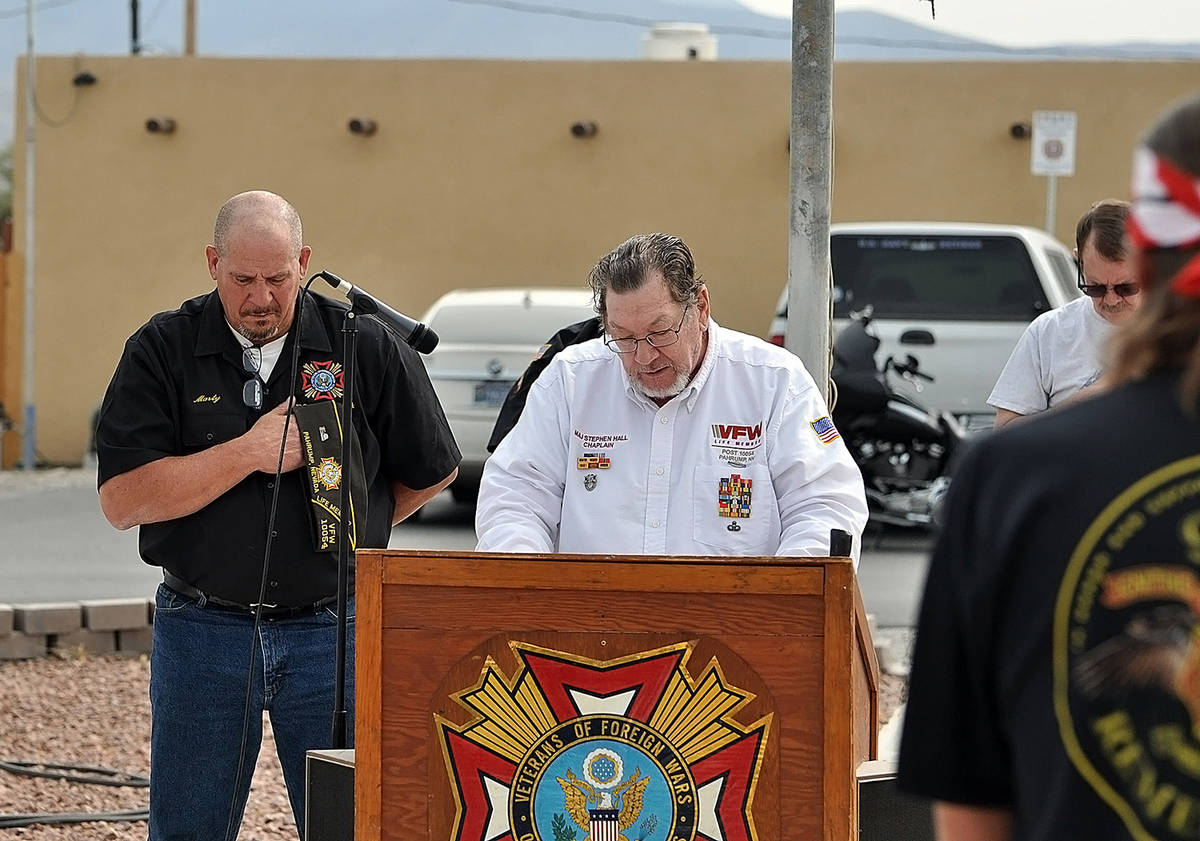 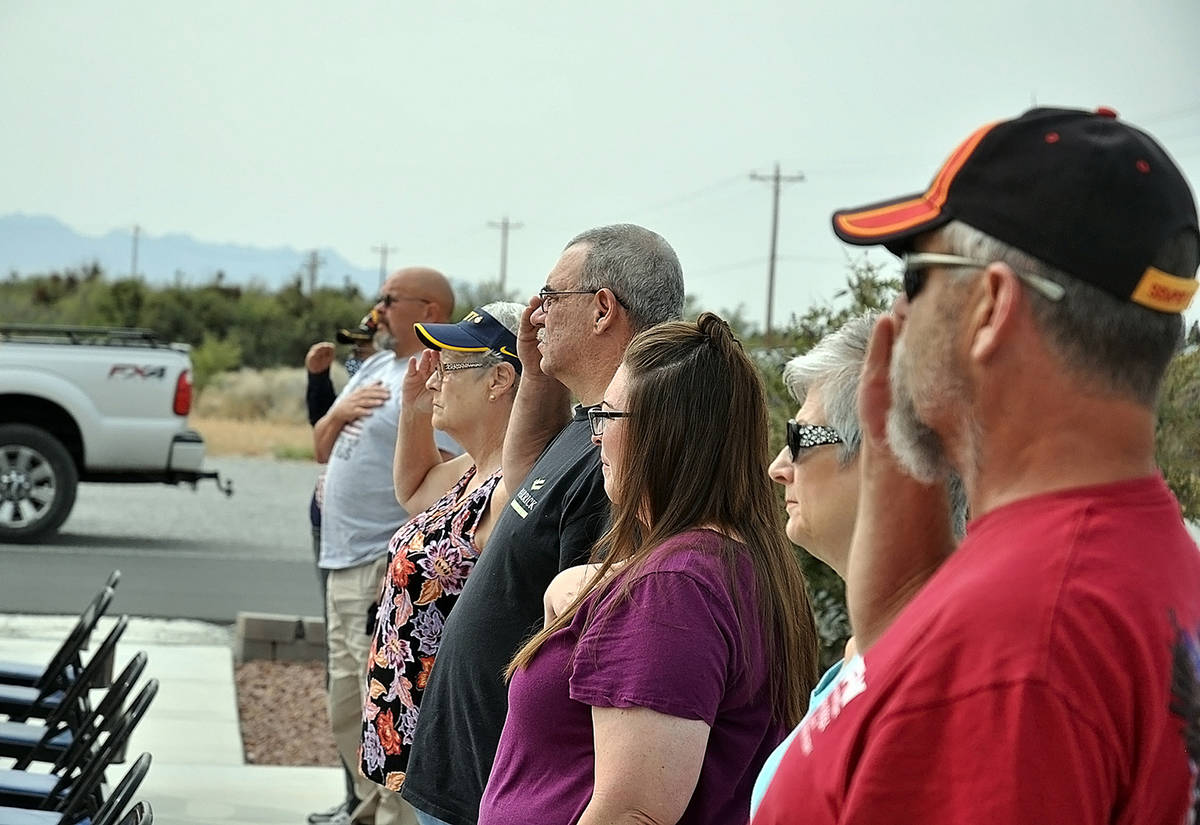 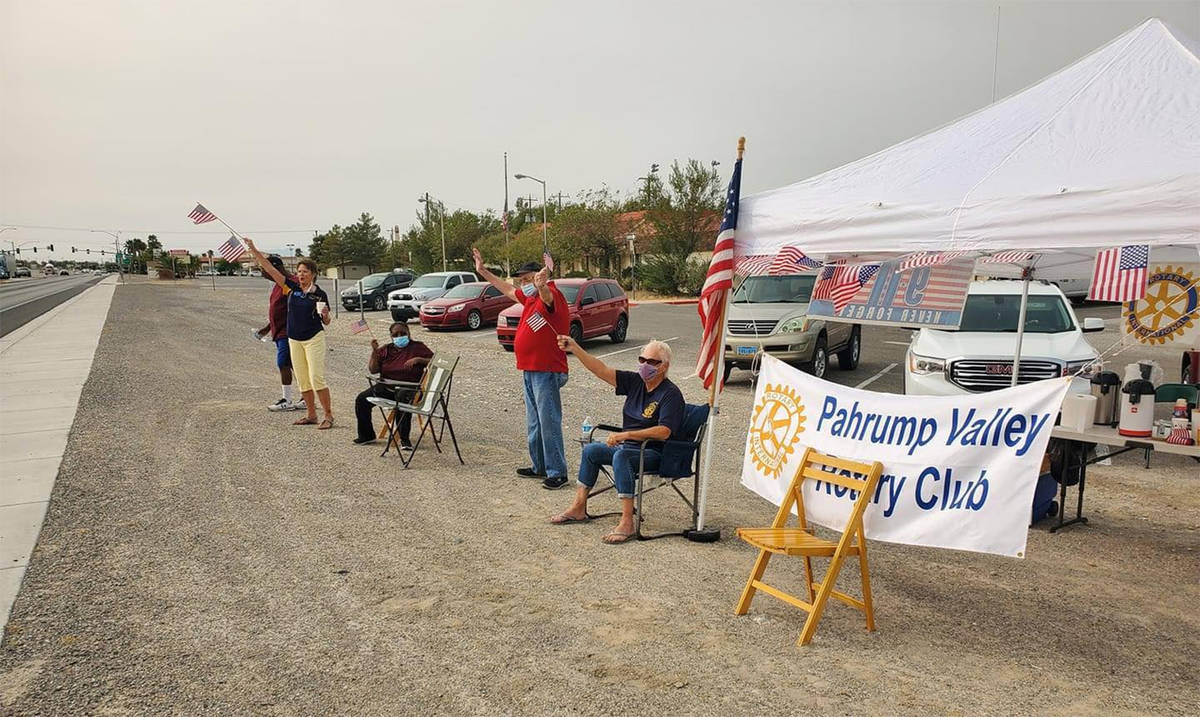 Photo courtesy of Pahrump Rotary Club Members of the Pahrump Valley Rotary Club lined north Highway 160 adjacent to Pahrump Valley Fire and Rescue Services Station One on Friday in remembrance of the 9/11 terrorist attacks. The members also provided coffee and doughnuts for the first responders.

On the south end of town, officials with Pahrump VFW Post 10054 hosted a ceremony on Friday, Sept. 11.

Post Commander Marty Aguiar said he was appreciative of the families and individuals who participated in the somber event.

“I thought the observance was phenomenal,” he said. “I think we had about 40 people there, which was really awesome. People from all parts of the community came out. It wasn’t just veterans. We had members from different groups like the Disabled American Veterans organization and of course people from our VFW and Auxiliary. We had people just show up that I’ve never seen before, and it was just awesome to see them, and our Chaplain, Maj. Steven Hall did a wonderful job.”

Aguiar also said the VFW hosts the annual ceremony to make sure all Americans never forget those who lost their lives during the attacks, where more than 2,900 people were killed in New York City; Washington, D.C.; and Shanksville, Pennsylvania.

“For me, 9/11 is about remembering what happened 19 years ago, and we said that we would never forget,” he said. “This year is especially important to me, especially with all the turmoil happening that we see in our major cities across the country. Because of that, people seem to forget. It was important for us to do this one on Friday, September 11th. We have been observing 9/11 for the past nineteen years.”

Additionally, Aguiar recalled exactly where he was when he first received word of the attacks, on Sept. 11, 2001.

“I was stationed at the Navy Reserve Center in Albuquerque, New Mexico,” he said. “I was just starting to initiate some new E-7 promotees and we had just finished up on our morning PT run. One of my staff came out and said a plane just hit the World Trade Center. He said it was a big jet. We turned on the news and that’s when the second plane hit the other tower, and as soon as the second plane hit the tower, we knew it was a terrorist attack.”

“The 9/11 event went very well, but we really cut it down because of COVID-19, where we really didn’t want to be super spreaders,” he said. “We had about seven or eight Rotarians there and we provided coffee and doughnuts to the firefighters. We set up on the side of the highway with flags and told people to never forget. We started this with the memorial in the Calvada Eye four years ago.”

Mankins too, remembered exactly what he was doing when he learned of the attacks.

“It was really early in the morning, and I had just woken up,” he recalled. “I made some coffee and I was sitting in my living room and turned on the TV and I thought it was some kind of movie. I saw the first plane impact the tower, then the next one hit the other tower, and I just couldn’t believe it. It was absolutely terrible.”