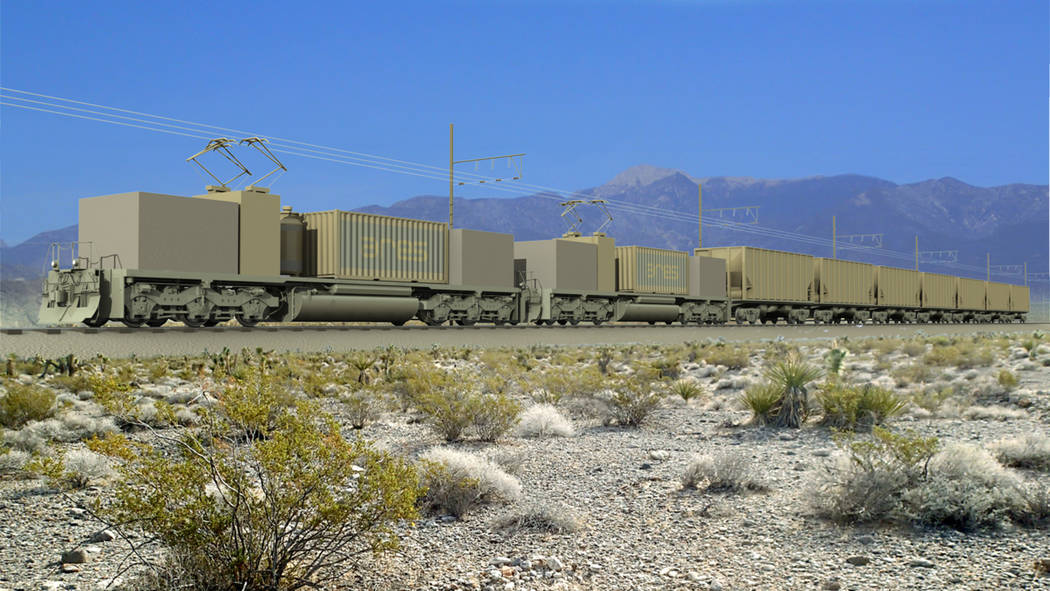 ARES Nevada plans to construct a 50-megawatt rail energy storage project that will cover 106 acres of public land near Pahrump, within the Carpenter Canyon area. The addition of the project will help stabilize the electric grid in the area, according to the company. ARES Nevada/Speical to the Pahrump Valley Times

ARES Nevada LLC has been striving toward a Regulation Energy Management project for many years and it now appears to be nearing the moment when the company will be able to break ground.

On Tuesday, Aug. 21, the Nye County Commission approved a development agreement with ARES, just one more step in the company’s journey to bring its concept into reality. During the commission meeting held that morning, commissioners explained that the project consisted of a green energy initiative geared toward stabilizing the electrical grid. Nye County Commissioner Dan Schinhofen detailed that he and fellow commissioner Butch Borasky had been watching the progress of the project since 2011 and he was pleased to see it finally gaining momentum.

At a previous meeting with discussion on the project, Schinhofen had stated, “I think it’s nice that we are doing this because in my first year in office, commissioner Borasky and I both went… to see the ARES project, which is a train car that will help store energy. Most of it will run downhill into Clark County but their office space, control room, will be here in Nye County. This will be a good thing for us and a good thing for renewable energy.”

“This system is a gravity-based energy storage system utilizing electric shuttle trains operating on a single, steep-grade railroad track to store electric energy in the form of potential energy. The goal is to assist in electricity supply management on a regional electrical grid,” the development agreement detailed. The ARES project is essentially a series of train cars that will act as batteries, commission chairman John Koenig explained. As the electrical grid produces more energy than is needed, the trains will travel uphill and through that process, will store the excess energy. When consumers require more electricity, the train cars will slowly travel back downhill to deliver the stored energy back to the grid.

Of course, with a project of this type and in the identified location, there were some community concerns to be addressed. ARES Vice President of Operations Francesca Cava assured the community in an interview that noise would not be a problem at all, stating, “It is really a very quiet system, it can’t be heard very far off. It’s been compared to the noise in a library.” Cava also offered reassurance on the public’s access to the Spring Mountains National Recreation Area through Carpenter Canyon Road, noting that the project would not restrict anyone from enjoying the area. Carpenter Canyon Road, she said, would intersect at the main track with a traditional railroad crossing, for safety purposes, but it would not prevent residents and visitors from heading out into the wilderness. “Clark and Nye County have both been very supportive,” Cava said. “We are currently in the process of securing all of our necessary permits, leases and plans to be submitted to the BLM and are anticipating we will be able to begin construction this fall. If that holds true, we are hoping to be operational in 2020.”

Once operational, the 50-megawatt project will encompass 106 acres of Bureau of Land Management land in Clark and Nye counties and will interconnect with the grid through GridLiance’s 230-kilovolt transmission line, according to the development agreement.

The company’s website also highlights economic benefits reported to be connected with the project, including 100 to 125 full-time-equivalent employees during an eight-month construction period and an estimated aggregated economic benefit to the area of $100 million.