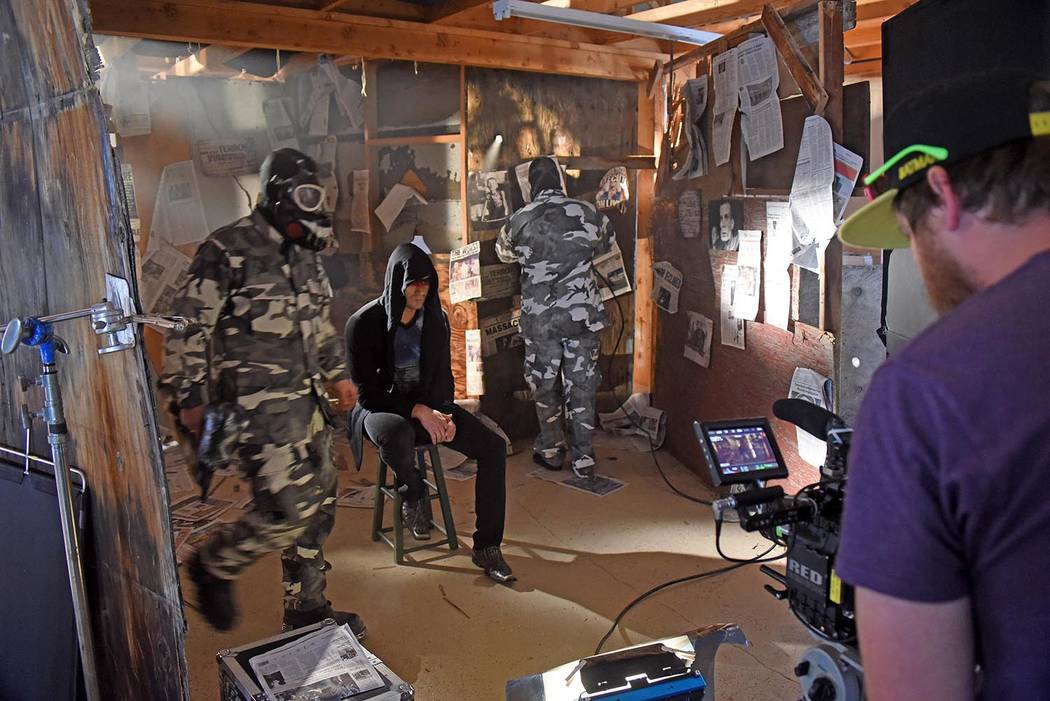 Richard Stephens/Pahrump Valley Times “Hearts Without Minds” deals with cruelty, violence, and atrocities committed by people acting as mindless followers. The destruction of a wooden shed behind the Red Barn Art Center at Rhyolite did not deter the production company that wanted to use it as the set for a music video.

RHYOLITE — It appears the ill wind of March 30 blew some good after all.

The destruction of a wooden shed behind the Red Barn Art Center at Rhyolite did not deter the production company that wanted to use it as the set for a music video.

Blare Media, of Las Vegas, notified the Goldwell Open Air Museum that it still wanted to use the shed and would come and reconstruct enough for their purposes. They got the go-ahead, with the caveat that strong winds were forecast again for the day they wanted to do the construction and for the day planned for shooting the video.

When they arrived at Rhyolite on Friday, April 7, the wind was blowing fairly strong enough to make piecing the shattered shed a near-impossible task.

The solution was to use pieces of the shattered shed to build a set inside the Red Barn itself, where not only were they protected from the wind, but they had total control over the light. This provided a better situation than they could have ever hoped for outdoors.

The music video, shot the next day, was for the song “Hearts Without Minds” by For All the Emptiness, a dark electronic group from Toronto, Canada. Members of the group flew into Las Vegas and were driven to Rhyolite for the project.

The group’s work embodies the passion of founder Jonathan Kaplan for science, logic, and critical thinking. Its music protests against anything the members find irrational or illogical, particularly when it results in violence or suffering.

Group member Kristian Melegi said that their previous project dealt with people “being seduced by ideas.” One idea the group finds illogical is that of an afterlife.

The group wanted to use a church for that video, but could not find one that would allow it.

“Hearts Without Minds” deals with cruelty, violence, and atrocities committed by people acting as mindless followers.

In the video, the walls of the set are covered with newspapers with headlines and photos of war and horrible crimes, and mindless “drones” in military camouflage and gas masks are seen adding more. The intent is to change hearts and minds to end such things, symbolized, as the song progresses, by the newspapers being taken down.