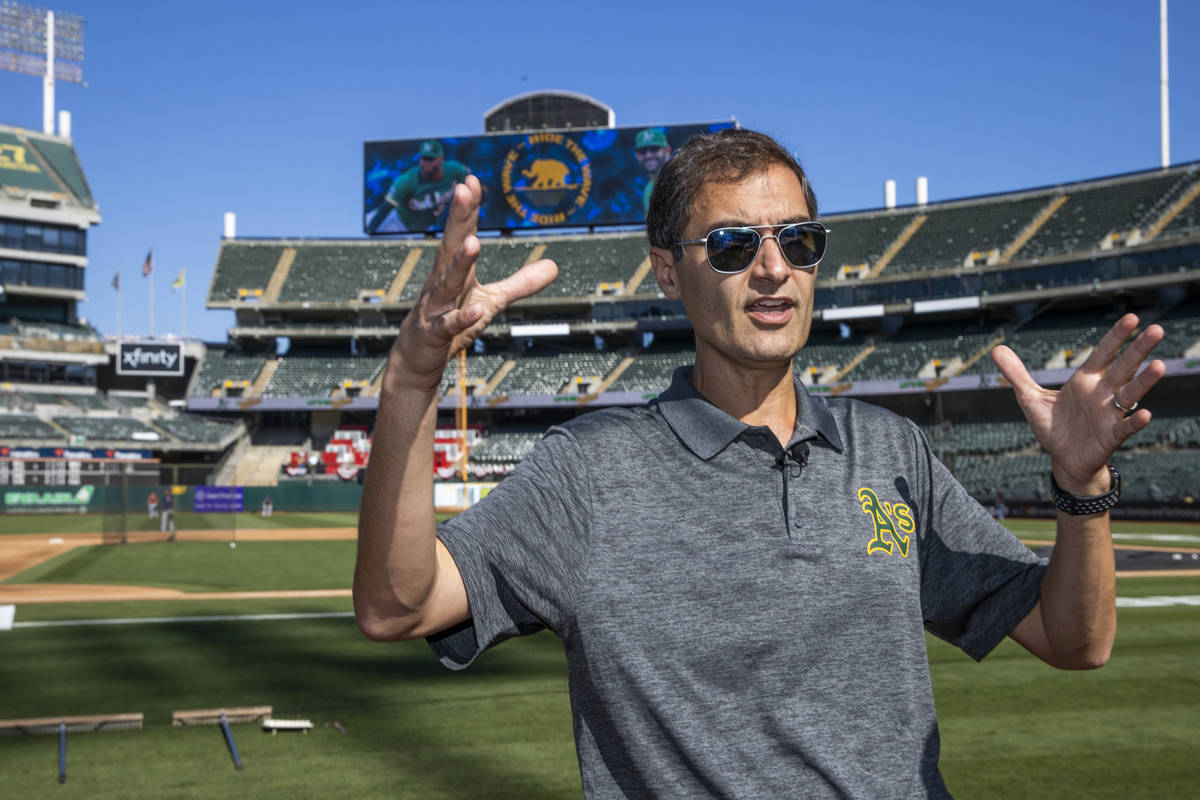 While the Oakland Athletics’ quest to land a new waterfront ballpark in the Bay Area continues, team brass are set for their third trip to Las Vegas for meetings tied to a possible relocation to Southern Nevada.

A’s owner John Fisher and team president Dave Kaval will lead the team scheduled to be in Las Vegas Friday, with plans to meet with elected officials, hotel operators and again tour potential ballpark sites. The pair arrived on Thursday.

Major League Baseball gave the team the green light in May to begin looking at possible relocation sites and thus far Las Vegas is the only city the team has visited or had discussions with regarding a possible move, Kaval said.

When the team executives took their second trip to Southern Nevada last month, they hoped to trim the list of possible stadium sites, but instead that list grew to over 20. Although the organization again hopes to cut down that list on this visit, there isn’t yet a clear-cut favorite site in the Las Vegas Valley.

“Not right now, but there are definitely some sites within the Resort Corridor that have different pros and cons,” Kaval told the Review-Journal. “There’s also Henderson that has a lot of appealing sites and then Summerlin. When I was out in Summerlin I was really impressed with Howard Hughes (Corp.), who is our partner right now on the Aviators and the huge amount of land and the vision that could create. Then obviously the options downtown. The tour we got from Derek Stevens and really seeing maybe the future of that area and the east Fremont area is pretty interesting as well.”

Stevens was excited about the A’s last trip and suggested he’d be interested in partnering with the team in some fashion if they found their way here via relocation. That type of potential partnerships has the A’s particularly interested in what the area has to offer.

“That’s a really exciting partner to have,” Kaval said of Stevens. “All the different resorts and they know entertainment and I think baseball needs some of that. Sometimes I think we’re a little too staid in the way we market our players, our product and I think there’s something that could be learned from the Vegas experience that the casino operators have. That will be a really interesting part and a real advantage of having that type of partnership. ”

Although team officials expressed their desire to also include a mixed-use development around a new stadium, that wouldn’t be the case if a new ballpark is built in the Resort Corridor, Kaval said.

“If you’re next to a resort or casino you get that naturally, but in other parts of Southern Nevada you want to actually build that around it,” Kaval said. “Whether it’s housing, or commercial or retail, we’ve seen how important that is to the success of many other stadiums in baseball. Oracle Park in San Francisco, Petco Park in San Diego, those are the models where that really works effectively, so we’d want to duplicate that same type of thing in Las Vegas.”

Oakland Mayor Libby Schaff said she understands the team needs to look at all options for a new facility, including making trips to Las Vegas to explore sites. But she is confident they’ll work out a deal to keep the team rooted in the Bay Area.

Although the A’s are keeping momentum building in Southern Nevada, the team is still patiently waiting for a July 20 vote by Schaff and the rest of the Oakland City Council on the term sheet for a proposed waterfront ballpark and surrounding mixed-use development.

On Friday, Oakland officials released an updated counteroffer that included some changes that make the deal more appealing to the city. Many of the items included in the report are noted to be agreed upon by the A’s, but there are a few items the two sides still aren’t in agreement on.

One of those additions was a request that the A’s sign a non-relocation agreement for at least 45 years, with the A’s agreeing to only a 20-year term, according to the report. Additionally, the city added a clause calling for the team to pay for liquidated damages if it ends up relocating before the agreed period of time is up.

“There’s still some pretty big gaps that we’re dealing with, that we’re still having conversations with the city in advance of the big vote on the 20th,” Kaval said. “We’re hoping to take a positive vote on our actual term sheet, or one that’s a very close derivative. … So, I think we’re just hopeful we can get to something and at the end of the day we just need to come to a decision.”