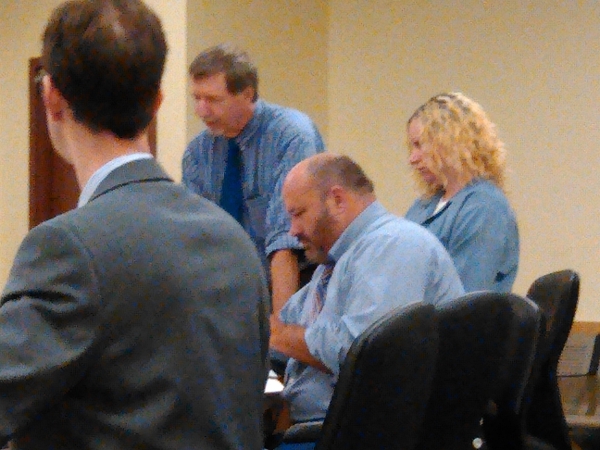 Local defense attorney Jason Earnest is pursuing an action to remove Justice of the Peace Ron Kent from the bench after filing an order of recusal on Sept. 8.

Earnest said Kent failed to meet his educational requirements as directed by the Nevada Supreme Court.

Judge Kent did not respond to numerous requests for an interview.

Earnest recently requested and received Kent’s judicial education records from the Administrative Office of the Courts to learn whether Kent met the educational requirements, while noting there are various other requirements judges must follow, some being mandatory.

Kent was elected to office in November 2012.

“On January 31st 2013, he attended the Judicial College about 30 days after he took office, which is mandatory,” Earnest said. “He went to North Las Vegas for a day-long course and did 14 hours, which he completed.”

“That rule states that you have to complete the class within 24 months of appointment or election,” he said. “The one that I am concerned about is the mandatory National Judicial College ethics course and I could see that there were no dates completed on that one, which leads me to believe that he didn’t do it.”

Earnest’s inquiry into Kent’s educational requirements came about chiefly from courtroom interaction between the two men – which he described at times as contentious.

He did admit that Kent was courteous to him outside of court.

“It is conjecture but I wouldn’t be doing this if I felt I, or my clients, wasn’t getting a fair shake in the courtroom and that’s what I believe,” he said. “I was never petty or personally attacked him. I noticed that his demeanor changed towards me, I don’t know if it was personal but I can’t help to think that it was.”

Additionally, Earnest said Kent had problems when other defense attorneys filled in for him when he was forced to miss a hearing due to unforeseen circumstances.

“During last December I had another defense attorney cover for me and she was well prepared,” he said. “I gave her the files and told her what was going to happen and he didn’t like it. He told her that she can’t cover for me. In the criminal defense world people get sick, take vacations, or whatever and we all help one another cover those cases. It’s common practice.”

Earnest appears to have a valid argument on his assertion that Kent may not have completed his education requirements.

Laura Bogden, executive director of Nevada’s Board of Continuing Legal Education (CLE) said all attorneys in Nevada, whether it be an attorney, state judge or justice of the peace, have the same CLE requirement, 12 total credits per calendar year.

“The only difference is that state judges and justices of the peace do not have to pay an annual $40 fee,” she said. “There are a few waivers such as military, federal judges, and hardship exemptions that need to be approved by our board on a case-by-case basis.”

Bogden also said when attorneys, state judges or justices of the peace are non-compliant, they are assessed late fees and/or suspended.

“I am not aware of any state judges or justices of the peace that have been suspended,” she said.

Earnest raised many eyebrows when he informed Kent of his intentions during a court hearing last Tuesday, just moments before the attorney was to represent a client on a DUI charge.

“There is some housekeeping issues that we need to do that are unrelated to my client, but related to me and you, your honor,” he said. “I made a request to the administration of courts for your judicial education records. It is my belief that you have failed to meet the requirements as prescribed by the Nevada Supreme Court rule 251. If that’s the case, judge, I’ll be seeking your removal from the bench.”

Additionally, Earnest suggested the fact that he lawfully made the request for Kent’s education records, “created a situation in which Justice of the Peace Ron Kent’s impartiality would be reasonably questioned if he were to preside over any case in which attorney Earnest appears as counsel,” the recusal order stated.

Unflustered, Kent noted he wanted to expedite the issue to avoid delays on other cases.

“I think the best thing to do is to reassign this to Department B and you can continue your representation on this case,” Kent said. “I want to try to do this in the most cost-efficient manner. That leaves us with the issue of your client still in custody.”

“It’s a two-week class at the Judicial College and there is a second class that is called ‘ethics, fairness and security in the courtroom’ that is also mandated by Supreme Court order,” he said. “It must be attended within 24 months of taking the bench. Basically there is two base classes or starter classes that are required by statute and Supreme Court order. After that, you get continuing legal education.”

Jasperson said judges are also required to participate in seminars, which are held every six months.

“There is usually one done in January and the mid-part of the year,” he said. “The classes that are offered during those seminars are geared to meet the required continuing education we need to have to continue to meet the requirements, which I have done.”

According to the State of Nevada’s judicial education requirements, judges must meet the requirements after election or appointment or seek a deferral.

Failure to attend, or failure to obtain a written order from a district court judge to defer taking the course, will result in forfeiture of office, pursuant to NRS 4.036.

Earnest noted all judges and lawyers must regularly re-educate themselves to keep pace with changes in law.

“Meeting your judicial educational requirements is a yearly thing,” he said. “Judge Kent should know that because he’s an educated man with a doctorate in law.”

Following the hearing, Earnest also said he did have some reservations about whether he wanted to take the action of requesting the records.

“I figured that we’d just deal with this like men and get it out in the open,” he said. “I put on the record exactly what I was doing and he was very judicial and professional in his response. Whether I’m right or I’m wrong, if there’s a controversy, it would be best for my client’s justice, that Kent not hear the case.”

Ray “The Flagman” Mielzynski has been a courtroom observer for more than a decade in Pahrump.

He said Kent’s background as a prosecutor may be behind Earnest’s records request, as Kent has ruled against Earnest in cases that Mielzynski believes should have gone in favor of the defense.

“I find that sometimes he leans towards the prosecution a little too much,” he said. “He should not make his decision on what he feels but make them on reasonable doubt. In a preliminary hearing, where there is just a smidgen of evidence, it’s still bound up to district court. I couldn’t find that smidgen of evidence and it’s just not right.”

Earnest filed a writ of probation in district court, which advises and directs the court to have Kent cease and desist hearing cases based on his argument.

“They will probably have a hearing and we’ll go from there,” he said. “They could probably get a senior judge or visiting judge to come out from another county to hear it.”

Earnest also made sure to mention the fact that Nye County is no stranger to controversy among elected officials over the years.

“I’ve been a lawyer for 19 years and I’ve never done this with a judge or a lawyer,” he said. “I wouldn’t be doing this if I was pleased with him. Nye County is full of DA’s and others getting accused.”

Kent, a former chief civil deputy district attorney for Nye County and a private lawyer, has been a member of the community since 1998. He was elected to office in 2012.