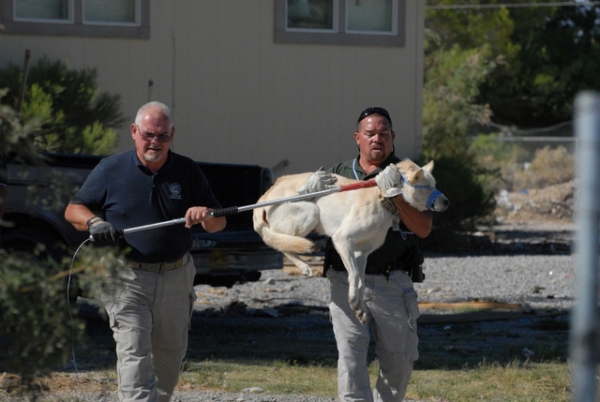 Judge Margaret Whittaker accepted Lord’s plea and imposed a 30-month suspended sentence, to run consecutively if Lord fails to adhere to her end of the agreement during Tuesday’s hearing.

“She had upwards of 50 different charges involving an excess number of dogs, inhumane conditions for the dogs, failure to get them vaccinated against rabies and failure to license them,” he said. “There were numerous incidences of her dogs running at large.”

Vieta-Kabell figuratively suggested that Lord will have the ‘Sword of Damocles’ hanging over her head as a result of the deal, as she must comply with all of the stipulations to avoid incarceration.

“Ms. Lord pleaded guilty and agrees to be sentenced to three months in jail on each count, which will run consecutively, but suspended,” he said. “She has 30 months of jail time hanging over her head and she also agreed to pay a fine of $500 for each count, which is a total of $5,000. She also agreed to reduce the number of animals that she keeps, down to zero. Normal people get to have dogs, but in Ms. Lord’s situation, this is much different. This will be in effect for two years.”

To be certain Lord complies with the plea agreement, Vieta-Kabell said regular status checks are included into the deal.

“The judge sentenced her to all of the terms per the guilty plea agreement,” he said. “Obviously Ms. Lord can’t blink her eyes and make the dogs disappear, so she is going to have to get those dogs rounded up and give them away. She can’t keep them and hopefully the court will get us in there in about a month and we will see where she is with the situation.”

Last month, Lord was arrested and jailed after failing to appear in court for her bench trial involving the animals.

Vieta-Kabell noted the practicing attorney was late to her Tuesday hearing, which was not the first time it’s happened.

“That seems to be a chronic problem with Ms. Lord and she was lucky she wasn’t taken into custody again on Tuesday,” he said. “She obviously failed to appear for her last hearing and I thought that she would fail to appear for this hearing but fortunately, she did arrive. Better late than never.”

As a result of Tuesday’s outcome, Vieta-Kabell said there is hope that Lord’s neighbors will not have to endure additional issues involving Lord’s animals.

“This has been ongoing for several years and it seems to be an unfortunate saga,” he said. “We will keep prosecuting as long as there are violations over there. Ms. Lord has a chance at this juncture to do the right thing and get rid of all the dogs because the people who live in that neighborhood deserve some peace and quiet. They shouldn’t have to live under those conditions.”

Additionally, the prosecutor said he hopes to return to court with a favorable status check.

“In a perfect world, I’ll be coming back to the court and happily informing the court that she has reduced the number of dogs on that property to zero, but if she can’t do that, the state is going to be asking to impose the 30 months of jail time,” he said. “This is her last chance. This is a make-it-or-break-it time for Ms. Lord.”