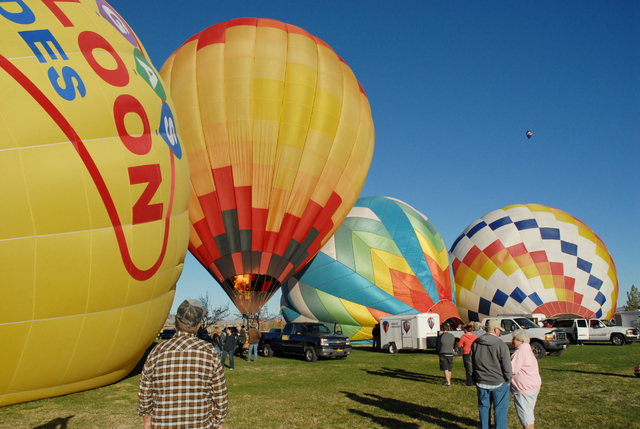 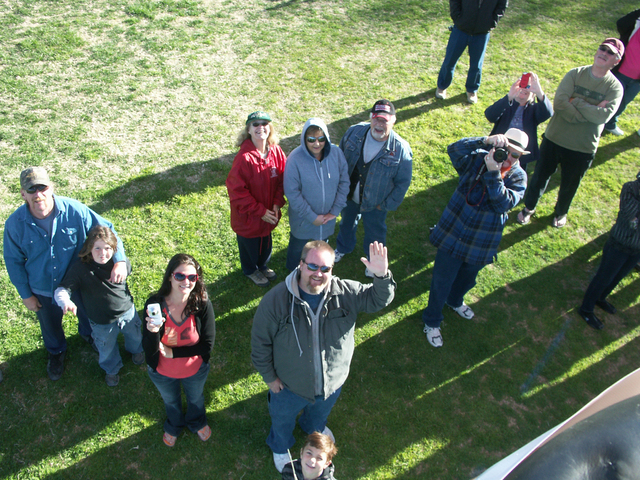 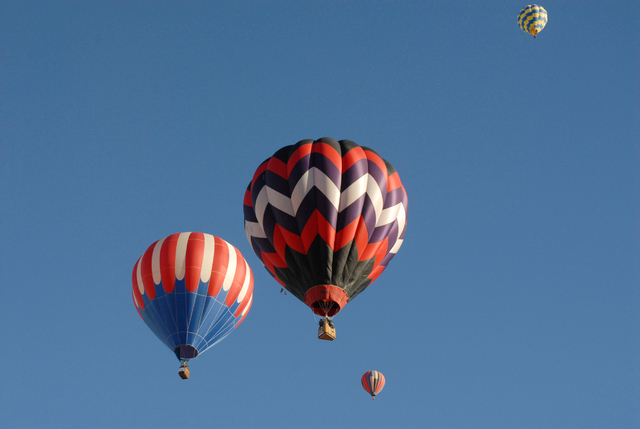 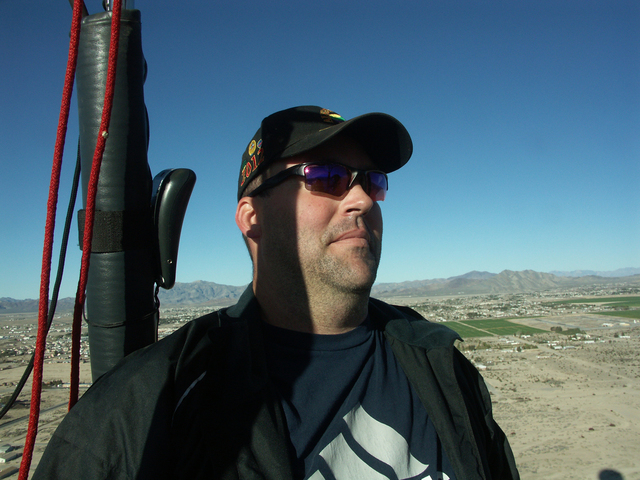 While Dreyer was tending to the needs of vendors and arriving balloonists, he also had to contend with winds gusting up to 25 miles per hour, which is pretty much a death penalty for any type of hot air balloon flight.

Pilots say more balloon flights are canceled due to windy conditions than for any other reason.

On Friday, Dreyer said he had a private little conversation with “Mother Nature.”

Whatever was said worked as the weather conditions early Saturday morning were described as perfect.

“Fortunately, we were able to get 23 balloons up on Saturday and Sunday. Overall, I thought the festival was one of the greatest events to ever happen in Pahrump. It was a phenomenal tool to bring the community together,” he said.

In order to take advantage of the day’s ideal weather conditions, balloonists start early in the morning at the crack of dawn.

Hundreds of locals were on hand to witness the first balloons being inflated and going airborne.

The process takes about a half hour to complete.

This reporter was invited to take flight aboard the balloon Elevation II, sponsored by the Chicken Ranch Brothel.

Along for the ride were Chicken Ranch webmaster and photographer Marc Remmen and our pilot Chris Glen.

If you have never had the opportunity to fly in a hot air balloon, the first time is quite an experience.

Glen laid out a few flight rules as the balloon slowly ascended toward the clear morning sky.

“There are things that passengers should not touch while aloft and they are all painted red.” Glen said. “They are the controls and propane tanks including these lines. We normally fly in light winds of six to eight miles per hour or less. Our speed is that of the wind and the distance will vary with the speed,” he said while pointing toward the horizon.

The lines allow Glen to maintain limited directional control of the balloon.

The flame from the propane tanks allow for altitude control.

There is no sensation of motion in a balloon as it is completely tranquil and stable with no rocking or swaying.

The flight lasted roughly 30 minutes where the balloon reached a height of close to 3,900 feet from the valley floor.

Glen ended the flight by opening what is called a “vent” to let hot air escape, decreasing the temperature inside the balloon, thereby decreasing lift.

The landing spot was in the desert along Bell Vista roughly 50 yards west of Highway 160.

Overall, the festival attracted more than 20 balloonists and 52 vendors.

Dreyer, meanwhile, said though he was grateful for the many sponsors who participated, there was one who he wanted to thank personally.

“The CCA sponsorship really stepped up to the plate for this event. They actually gave away their flight to a Korean and Vietnam veteran. Those two men were so excited to be recognized and that is totally what we wanted to achieve with this event. It was CCA who did that and what a wonderful sponsor they were and that’s what sponsorships are about. They didn’t just sponsor the event, they went a step above and really recognized some of community’s heroes. It was the only picture that I took of the event, when those gentleman were getting into the balloon. I am a veteran, so it was a real tear-jerker moment for me,” he said.

Pahrump Town Board Vice Chair Bill Dolan first got the attention of chamber officials last year by floating his own trial balloon urging the organization to sponsor the event, which he referred to on Monday as “awesome.”

“After speaking with some of the hotel people in town, the rooms were all full, RV spaces had extra visitors in them and the restaurants were full. They came here and they spent money and had a great time,” he said.

Dolan said he was equally concerned about weather conditions in the days leading up to the event and whether it might be canceled.

“I think it would have affected our ability to move forward next year but it ended up working out for the best and there have been a lot of positive comments. I don’t think we received one negative comment about the event over the weekend and people are already talking about next year,” he said.

Dreyer also noted that it is still too soon to determine what, if any, scheduling changes will be made to the event next year.

“You are always competing with other organizations for venues. With the balloons, the cooler the weather, the better opportunities you have for flight. We are really kind of limited to a small window. We are going to take a good long look at that prior to establishing a date for next year. For us, March was perfect,” he said.

Along with sponsored balloon flights for some, tethered flights were offered for everyone at $10.

As an added feature, all first-time flyers were also treated to a special ceremony following their respective flights.

Over the long history of ballooning, several traditions have developed within the ballooning community.

According to Glen, legend has it that early French balloonists carried champagne to appease angry or frightened spectators at the landing site, which were usually rural farms.

A champagne toast is now often included in most sight-seeing flights.

Following this reporter’s flight, we were invited to take part in the ritual which included reciting the “Balloonists Prayer” along with the champagne toast:

“The winds have welcomed you with softness. The sun has blessed you with his warm hands. You have flown so high and so well, that the gods have joined you in your laughter and set you back again into the loving arms of Mother Earth.”