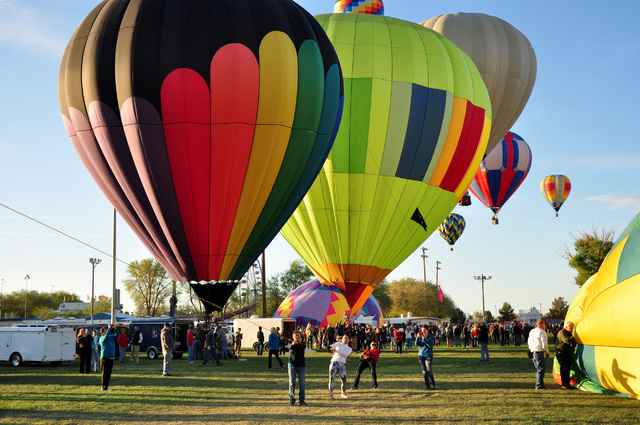 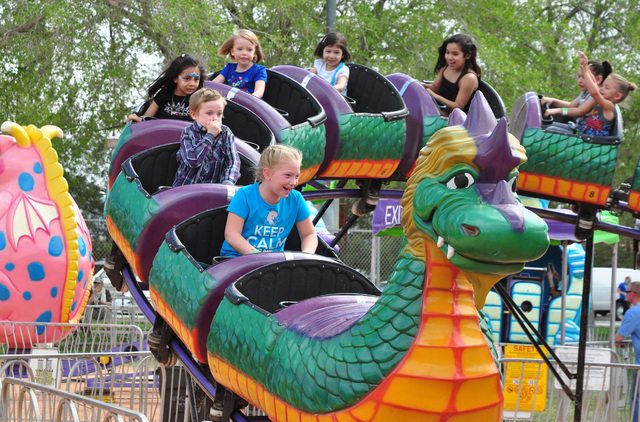 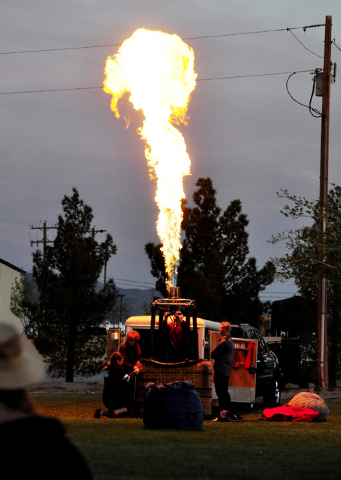 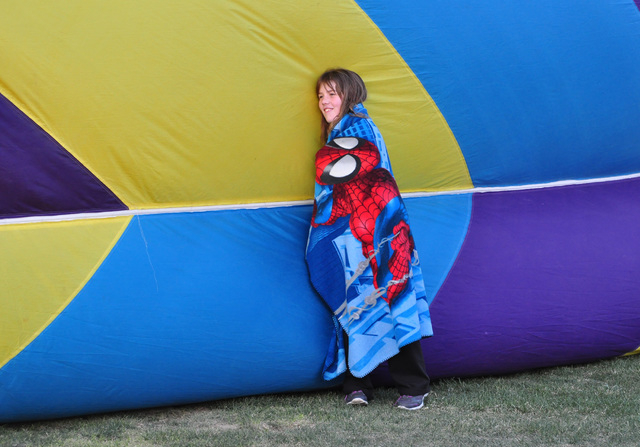 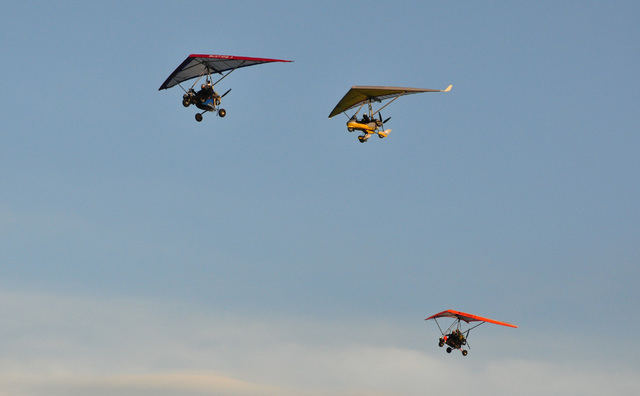 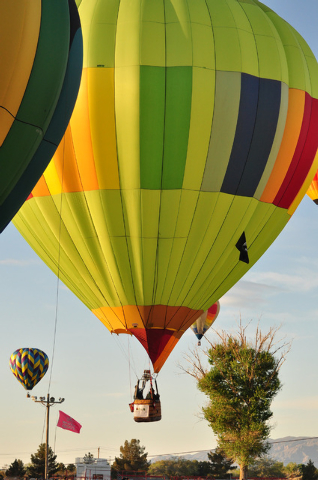 Operators of the annual balloon fest may look to expand the event next year after a second successful run that saw bigger-than-expected crowds with every hotel room in town booked.

“There was not a room left and that’s a great thing,” she said. “We got great responses from Las Vegas residents and visitors who came out to Pahrump. I heard a lot of people say they were from Las Vegas and I wouldn’t be at all surprised by 4,000 visitors at Petrack Park throughout the weekend.”

The only downside was gusty weather conditions that prevented the “Glow Show” on Saturday, and prevented the 20-plus balloonists from taking to the skies on Sunday morning.

Ballooning requires light winds generally less than 10 miles per hour for the inflation process and more importantly, the landing, as high wind landings can be bumpy and rough.

“On Sunday morning the high winds were just enough to prevent us from getting off the ground,” Kerr said. “It was unfortunate, but Mother Nature did a fine job this year and it was a beautiful weekend. I thought it was wonderful and I was so happy with the response.”

Upwards of 27 balloonists and more than 49 vendors set up in the park, much to the delight of the more than 4,000 visitors to the festival.

Kerr said a series of practice flights and setup on Friday went off as scheduled, as did several local school assemblies where the pilots met with students to talk about the sport of hot air ballooning.

On Saturday, she said all of the conditions were ripe for the early morning liftoff up through late morning.

“On Saturday morning we had a beautiful launch and all of the balloons went up; we also had tethered rides through 10 a.m. on Saturday morning,” she said. “The winds picked up just enough to force us to cancel the glow event so it ended up being what’s called a “Basket Burner” which is very cool in itself. The vendors loved it, the crowds were huge and it certainly grew from last year and we are already looking at next year’s balloon festival.”

Sandy and Michael Rogers are the owners of “4” On The Floor custom metal art.

On Friday, the Rogers were almost finished setting up their booth as other vendors were making their way into the venue.

“We came to last year’s balloon festival and it was really nice and we had a great time,” Sandy Rogers said. “Our sales last year were very good because we had just started creating the balloons. We didn’t have as many as we do now and they sold out in 15 minutes. We made sure to bring a few more this time.”

Kerr said, all in all, the vendors seemed to have done well for themselves this year, while adding she does have a few alterations for next year’s event as it relates to the all of the vendors.

“They all seemed to have one thing in common and that was they wanted a little more space for their booths,” she said. “I also want to make sure that the Chamber of Commerce has a schedule of events where we can answer vendor questions as we walk the vendor lines instead of telling them they have to walk across the park to find out. That also goes for any upcoming festival.”

Local vendor Stacey Shoemaker, owner of G&S Pit Stop catering, said she too was pleased with the turnout this year.

“It worked out okay for us because there were not a lot of food vendors,” she said. “It was absolutely worth it to go this year we really did work our butts off and I think I was the only vendor left standing on Sunday and we were still making sales. I will definitely be back next year.”

Kerr praised all of the pilots for their efforts in making the festival successful once again this year, while noting at the same time, the pilots were grateful for the warm reception they received throughout their stay.

“I do have to say that the pilots were touched with how well the community responded to them,” she said. “I told them that I had the town on their best behavior.”

As a result, Kerr said the pilots were treated to several local attractions during their visit.

“All of the pilots got to go on tours of the town,” she said. “Spring Mountain Motorsports Ranch and Country Club had them out Jack Sanders from Sanders Family Winery also had them out visiting and touring his winery. The Chicken Ranch brothel had them out so the pilots were able to see some of the highlights of what Pahrump has to offer and they had a wonderful time.”

Additionally, Kerr said next year there are plans to expand the ballooning portion of the event.

“We are already looking at adding a third day next year,” she said. “That way the pilots can come Friday, Saturday and Sunday. They said that if they can fly two out of three days it’s considered a successful event. The third day would actually be that Friday.”

Kerr also said local residents and visitors should bear in mind that ballooning is an activity that must be performed only during certain hours of the day: sunrise and sunset.

“You’re not going to come to the park and see a balloon aloft at 2:30 in the afternoon. The one thing I would do next year is put “sunrise and sunset” in big letters to let people know that, because the last thing we want to do is create a situation where we have made them angry because they have driven all the way out here and didn’t find what they wanted.”

She also said due to Sunday’s flight cancellation, a popular balloon coloring contest was slightly altered, as the winners were scheduled to fly on that day.

“We had held contests with the winners receiving a free room night and a balloon ride. Both contestants reported a good stay in Pahrump. The “weather permitting” was an issue on Sunday and the winner who didn’t get to ride will return for an alternate off-road adventure or Jetpack America flight at the Spring Mountain Motorsports Ranch and Country Club.”

Pahrump’s Director of Tourism, Arlette Ledbetter said she’s certain many local businesses benefitted from the increase in foot traffic during this year’s event, even though all of the numbers are not in just yet.

“We drew a lot of interest from the Las Vegas market,” Ledbetter said. “We displayed eight digital billboards featuring the festival. I was recently on the Valley View Live television show for an interview about the festival. Additionally, we did a Las Vegas Sun page takeover and featured the festival in our E-newsletter. I was at the park on three different occasions and noticed a robust crowd having a wonderful time enjoying the festivities.

Kerr meanwhile, said the event would not have taken place in Pahrump if it were not for the main sponsorship of two local community partners, including Valley Electric Association and AmeriGas.

“This event could not have happened without AmeriGas because they provided every last drop of the fuel for every single balloon for every single flight throughout the weekend,” Kerr said. “They actually donated all of the gas and it was totally free for the pilots. AmeriGas has donated all of the gas for the past two years and they should be commended.”

Kerr also gave kudos to the Lions Club who prepared breakfast in the park for the attendees.

Pahrump’s Davis Amusements provided the expanded carnival portion of the event which drew many young and old attendees to the rides.

Chamber officials say they have already begun making plans for next year’s Pahrump Hot Air Balloon Festival with possibly an additional venue at another locale in town where the balloons can be safely launched.