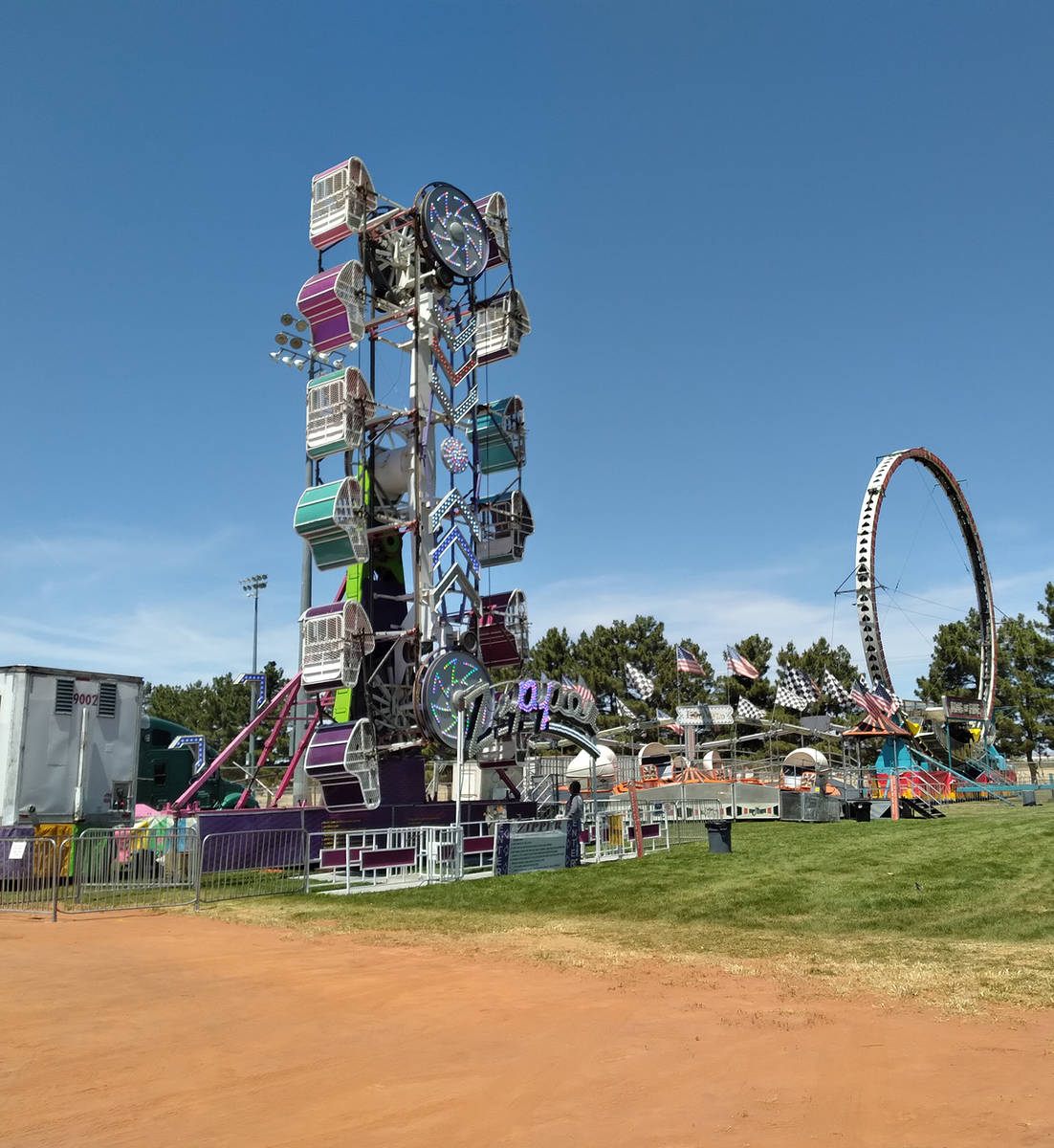 Selwyn Harris/Pahrump Valley Times The Zipper and the Ring of Fire, courtesy of Paradise Amusements, were two of 13 attractions at the 8th annual Pahrump Balloon Festival this year. 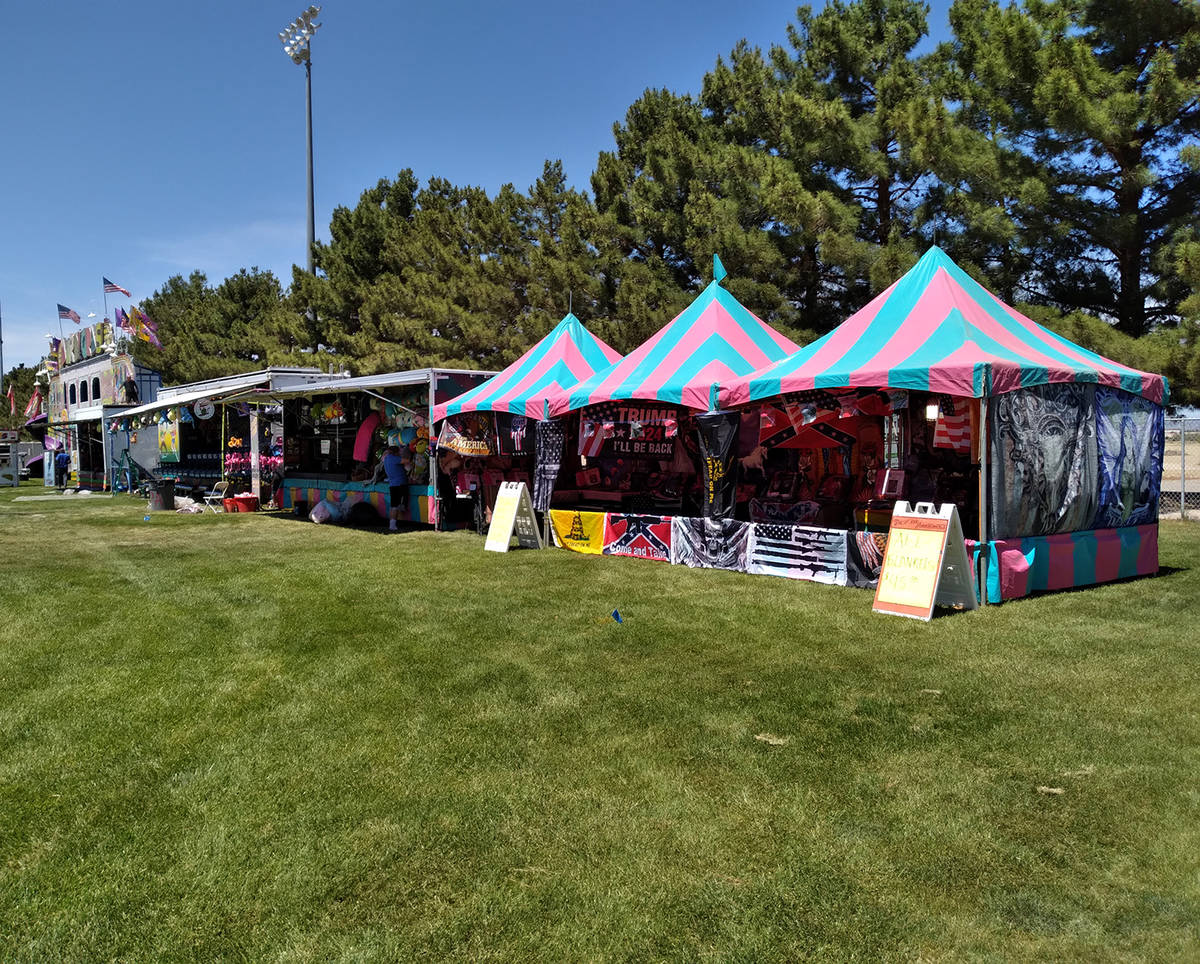 Selwyn Harris/Pahrump Valley Times More than two-dozen vendors took part in this year's balloon festival, some of which arrived in Pahrump from out of town. 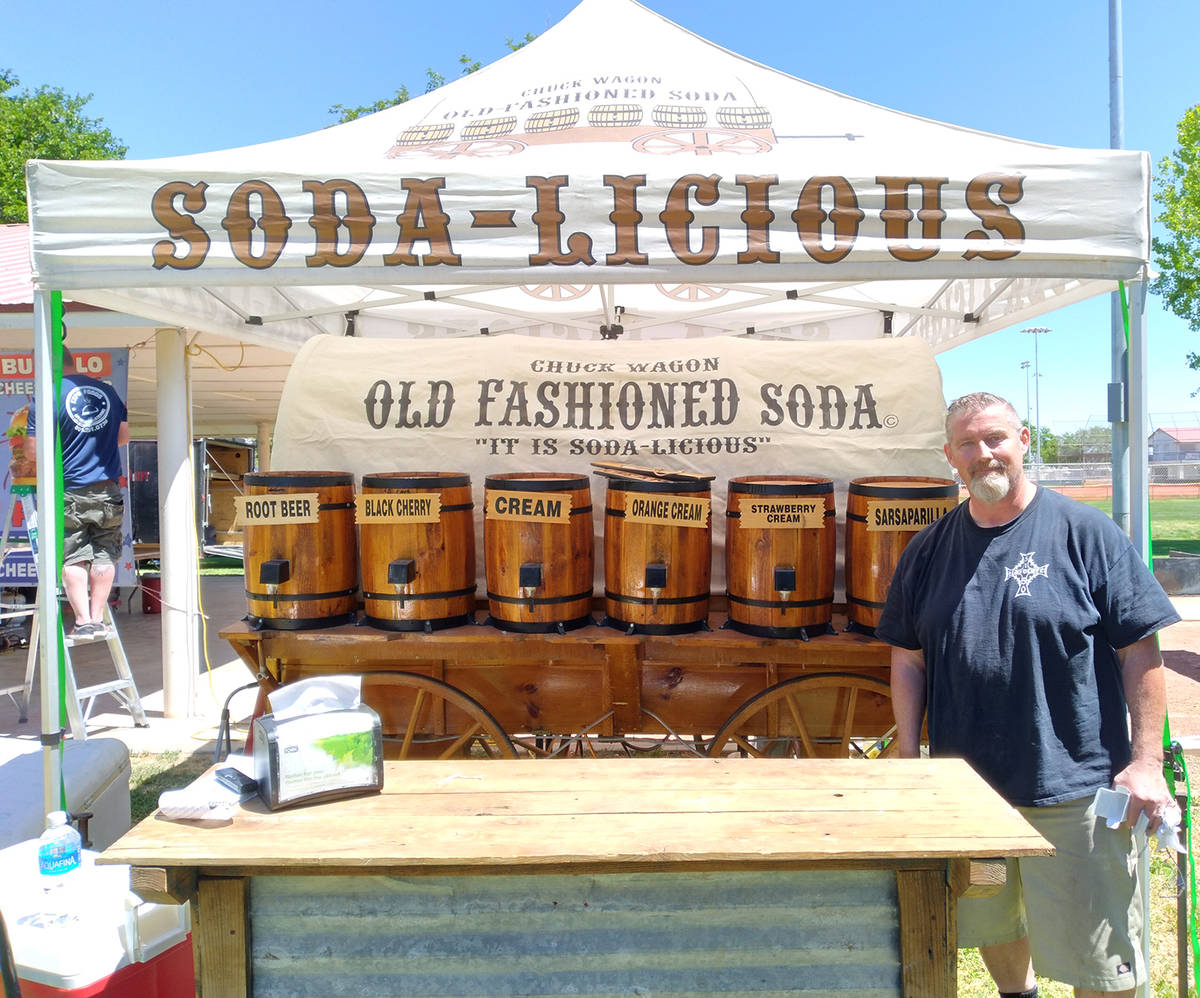 Selwyn Harris/Pahrump Valley Times Arriving from Fresno, California, Rob Hensley said 2021 was the first year he traveled to Pahrump for the balloon festival. 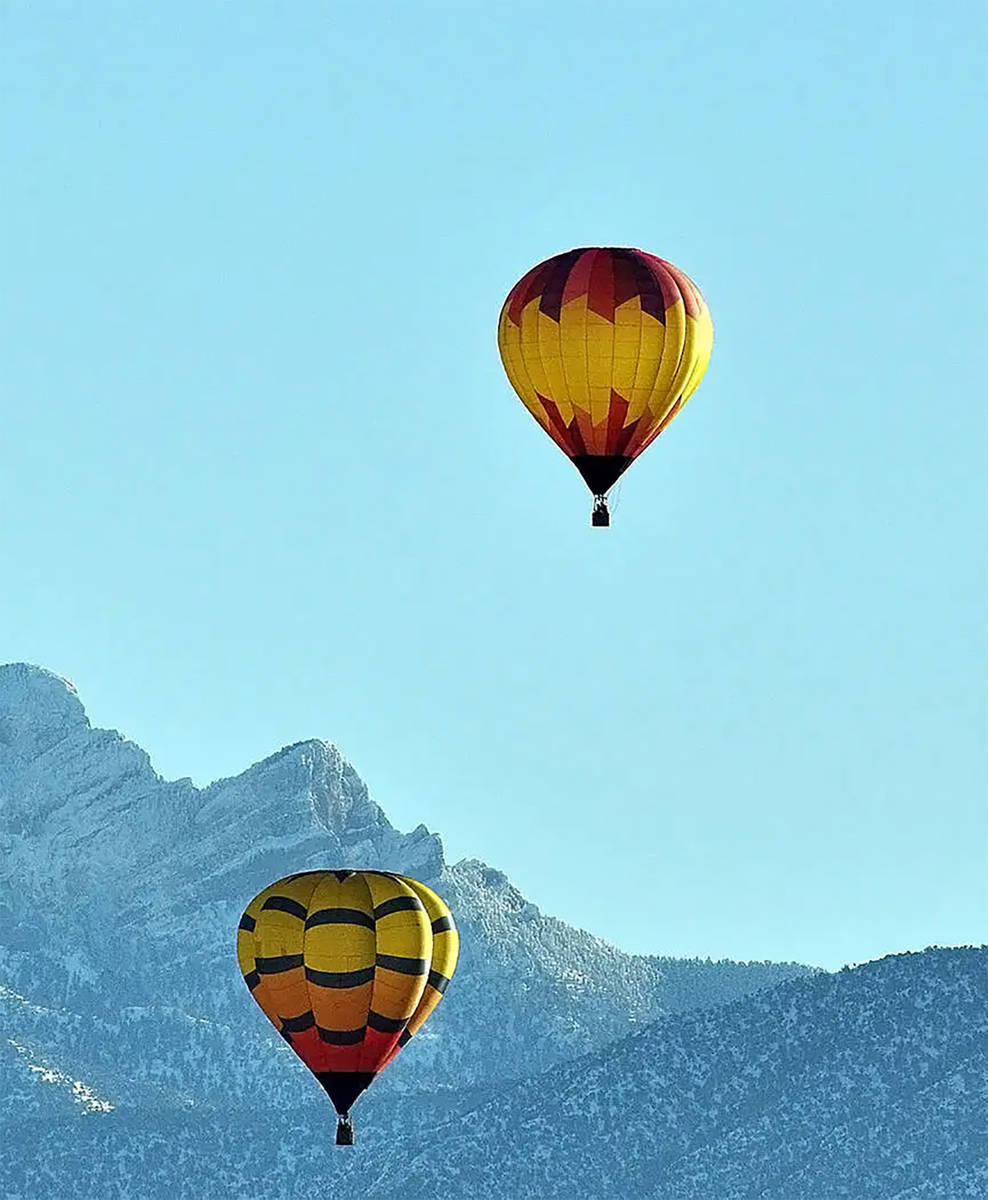 Selwyn Harris/Pahrump Valley Times Numerous balloons floated serenely over the Pahrump Valley floor, much to the delight of local residents and visitors throughout the four-day event.

Hosted by the Pahrump Chamber of Commerce once again this year, the 8th annual event was held at Ian Deutch Park.

Previously, Petrack Park was the venue for the popular event, complete with a multitude of vendors, both local and from out of town.

One such out-of-state vendor arrived in Pahrump from Fresno, California.

Rob Hensley said 2021 was the first year he traveled to Pahrump for the balloon festival.

“We came in just for this particular event,” Hensley said. “Good lord, we have been struggling for quite some time now, so we hope it will be worth the time and travel, when you count in all of the COVID shutdowns.”

Hensley also didn’t hesitate to talk about his soft drink vendor booth called “SODA-LICIOUS,” with a variety of flavors, including root beer, black cherry, cream and sarsaparilla, among others.

“They are old-fashioned sodas and they’re made with cane sugar so it’s a little more natural,” he said. “They’re actually produced on the East Coast, and it’s very popular over there. When we sell it, it comes out of the machine warm, and then we fill up your cup with ice to make it cold, so it’s kind of an old version process, but with less carbonation, and the flavors are just amazing. We started about a year ago, and obviously things quickly changed, so we actually went all the way to Florida for about eight weeks and we did very well with it. Now that we have the opportunity on this side, we’re coming back home.”

Just a few yards from Hensley’s booth was that of local resident Jennifer Benedict, who ironically was selling one of the main ingredients for Hensley’s product, or for anyone else attending the festival.

Benedict, who attends numerous local events as a vendor is the proprietor of Pahrump’s Liberty Ice business on Frontage Road.

“We sell 20-pound bags of ice to anybody who needs it,” she said. “We make our rounds, and just pass out our cards. For the past three years we’ve been a vendor each time that they’ve had an event, including the Fourth of July, Fall Festival and the Wild West Extravaganza. It is worth our time coming out, but it definitely needs to get advertised more because people go to the stores and buy the ice because they don’t know that we’re here.”

For those who enjoy foot-long corn dogs, juicy beef hamburgers, fresh-cut fries, or even a buffalo burger, area resident Charlie Doucet and staff were on hand once again this year, ready to serve them up.

“This is our seventh annual Pahrump Balloon Festival, so, really happy to be here involved with Donna from the chamber,” Doucet noted. “All the orders are made fresh to order. The buffalo is very lean, and there’s no fat. The beef has a little bit of fat, which sometimes creates more taste. Some people like it better because it’s got an 80/20 ratio. I think we’re gonna be good this year.”

Doucet also spoke about how the pandemic has affected his business over the past year as he traveled throughout the region, hitting different venues and events.

Pahrump residents Willie and Mayola Luster were also impacted by the pandemic.

For many years they would set up shop at several different events throughout the year, including the Pahrump Fall Festival and Wild West Extravaganza.

The product they sell is known as Real Time Pain Relief.

“Last year we didn’t even work,” Willie Luster said. “We have a product that’s been around for 20 years, that we’ve been using for the last 10 years ourselves, and it’s a combination of all-natural ingredients, that works on all different kinds of pain, with no chemicals involved at all, and the product is used to prop to the areas where we all have pain, and the pain goes away. Most people want to go to doctors, get medication and pills or surgery, which is not a good thing. Our location right here is great. We chose this because it’s close to the fair and it’s also in the midst of all of the other vendors.”

Wanna go for a ride ?

With a number of different attractions for both the younger and older set, Paradise Amusements provided the carnival portion of the balloon festival.

McKay said she was a bit concerned the event would not go on as planned after a scheduling conflict with the Pahrump Valley Little League.

Fortunately, Nye County commissioners were able resolve the issue during a meeting earlier this month.

“It was a big concern because we had employees coming from Mexico on the H-2B program, so they basically had to get paid one way or the other, because once they cross the border they are on your payroll, so it’s a little more challenging this year,” she said.

Regarding the COVID-19 outbreak, McKay said the pandemic has certainly affected her bottom line when setting up her carnivals regionally.

“We did our pumpkin patch in Las Vegas last October with only a 350-person capacity and that was tough, but we did it,” she said. “We had county officials out there every day, and never once did we have to shut down. We have all of the hand sanitizing and washing stations. Our employees haven’t really worked in a year except for just one event last fall for 21 days and the Hispanic employees haven’t worked for well over a year and a half, so they’re probably a little rusty. Also, a lot of the equipment hasn’t run for a year, so we wanted to go through it thoroughly. We had an inspection to make sure everything was extra safe. Thirteen attractions was all we could get in here this year, with the amount of social distancing. We also plan to return for the Pahrump Fall Festival.”

Due to gusty wind conditions, Saturday evening’s glow show was canceled, as were the Sunday morning balloon flights.