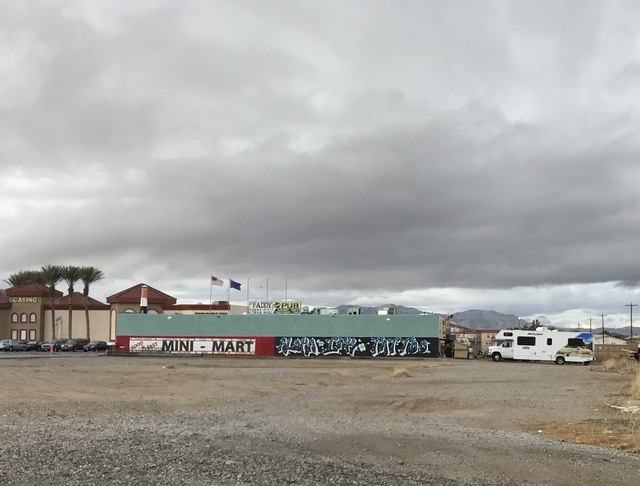 Paddy’s Pub, seen a few days after the television show, “Bar Rescue”, began filming an episode at the local bar. The Paddy’s Irish Pub signage (top) on the side of the establishment has since been painted over (bottom), showing some of the first signs of the remodeling taking place at the establishment. Mick Akers/Pahrump Valley Times 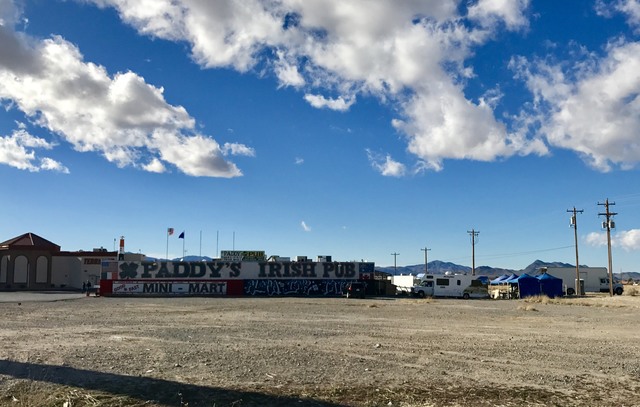 A popular cable television show that rehabs struggling bars made a stop in Pahrump this week.

Spike TV’s “Bar Rescue” has been at Paddy’s Pub, located at 1700 Pahrump Valley Blvd., since Monday, where the show began filming episode 133 of the popular program.

Although tight-lipped about the whole ordeal, a crew member outside of the bar confirmed the show was filming an episode of the show at the bar.

Owner Roy Rogers wouldn’t comment any specifics but did acknowledge that something is going on at the establishment.

“We’ve got all kinds of stuff going on,” Rogers said. “But there is nothing that I could tell you about it. We’ll find out in a while. There’s nothing I can disclose to you right now.”

Bar Rescue seeks out bars that are in need of an update and usually features owners that are struggling financially. Host Jon Taffer, goes in and creates a plan and the owners and staff must go along with his vision or the show won’t go through with the remodel.

In addition to remodeling the bars featured on the show, the establishments are also usually rebranded, to give the business a fresh start with its new look as well.

A marked change was already noticeable Friday morning with the graffiti style “Paddy’s Pub” painted over on the side of the building.

Bar patrons can expect an updated facility and a new name for barflies to enjoy their beverages in the near future.

The air date for the episode featuring Paddy’s Pub has not been disclosed at this time.