David Jacobs/Pahrump Valley Times A truck lines up at the start of Day Two of 2016 Best in the Desert Vegas to Reno. The race has not been without its local critics in the Beatty area, particularly those who enjoy exploring the surrounding desert. Some race roads have been heavily damaged and basically rendered unusable. 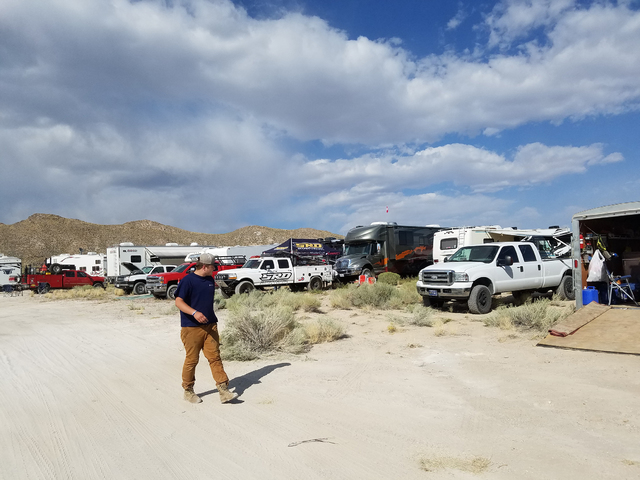 David Jacobs/Pahrump Valley Times Tonopah's population swelled temporarily on Aug. 19 and Aug. 20 of 2016 with thousands staying overnight in Tonopah for the Best in the Desert Vegas to Reno off-road race. As in several years past, Beatty is to be the actual starting place for the event in 2017. 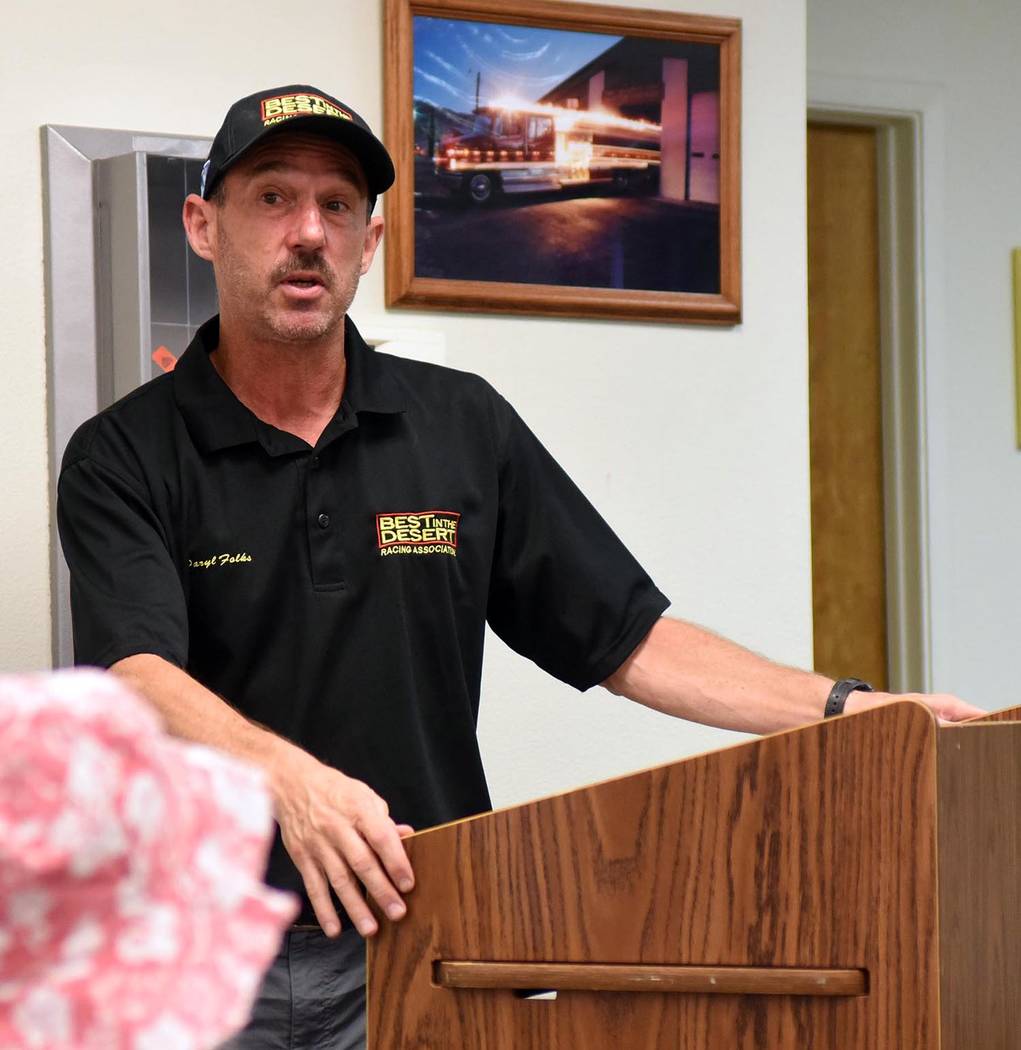 Richard Stephens/Special to the Pahrump Valley Times Daryl Folks, with the Best in the Desert group speaks to the Beatty Town Advisory Board in late June.

The Beatty Town Advisory Board has voted to support the Best in the Desert Vegas to Reno race scheduled for August.

As in several years past, Beatty will be the actual starting place for the 550-mile event planned for Aug. 18-19.

“I don’t know why they don’t call it the Beatty to Dayton race,” quipped Board Chairman Dick Gardner at the board’s meeting in late June.

The race has not been without its local critics, particularly those who enjoy exploring the surrounding desert. Some race roads have been heavily damaged and basically rendered unusable.

Local resident Randy Schroeder was particularly upset by past race damage to a historic road referred to as “the Old China Road.” He also said Sober Up Gulch, Windy Gap, and others had been “screwed up.”

David Spicer said that a lot of damage was done by earlier races that were actually sponsored by a different organization. Back then there were no requirements for reclamation.

Tim Coward, from U.S. Bureau of Land Management’s Tonopah office, said that the requirements on racers have been getting stricter, and things would be better in the future.

Both Coward and Daryl Folks, with the Best in the Desert group, said that there is significant advantage in having alternate race routes so that they are not used year after year but are given time to rest and recover. “It’s amazing what Mother Nature can do if you give her time,” Folks said.

Folks said that, as a former motorcycle racer, he is very sensitive to soil types, and that he will be looking very closely at that factor in searching for race routes.

Schroeder asked what the passing rules were like for Best in the Desert races. He said he had seen places where racers had plowed through vegetation by passing off the course.

Folks said that in places like the dry lake bed at Sarcobatus Flat, they had laid out the shortest possible route. “So if they go off the course, they are breaking the rules, but they also are not taking the shortest route.”

The BLM is encouraging the organization to submit multiple routes for analysis so that once they are approved they can issue a five-year permit.

Folks said he wanted to make some donations to the community but did not know what his father had done in the past. Brad Hunt said that he had given $500 each to the Beatty Volunteer Fire Department and to the high school.

Spicer suggested that Best in the Desert might partner with his company and others to repair some of the roads damaged in the past, even damage caused by other races.