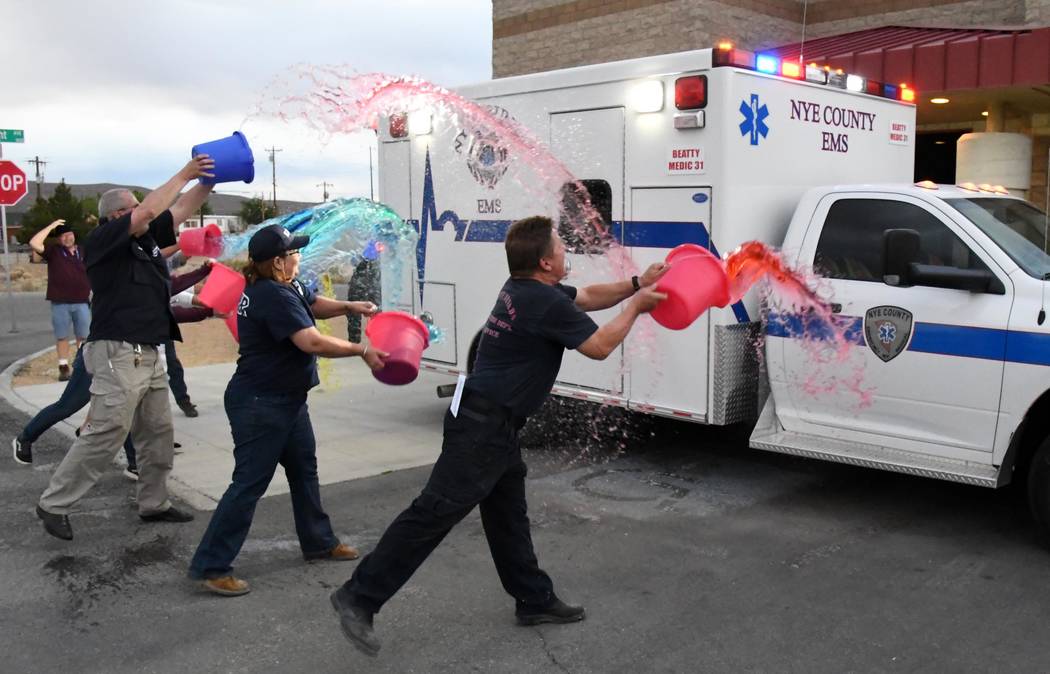 Richard Stephens/Special to the Pahrump Valley Times Members of the community, including emergency service volunteers, participate in a "washing down" ceremony for the new ambulance.

The highlight of the May 14 Beatty Town Advisory Board meeting was the presentation of the town’s new ambulance by Nye County Director of Emergency Services Vance Payne.

Payne, who is retiring this summer, was honored by the board for his service to the community. Treasurer Erika Gerling presented him with a plaque, and following the meeting, there was cake for everyone.

Payne said it had been an honor to work with the community, and he had high praise for the town’s volunteer fire department and volunteer ambulance service, saying “these people are top-notch.”

The new ambulance, one of three acquired by the county with the aid of a grant from SolarReserve, is specifically designed for rural service. One of the new pieces of equipment on the rig is a power gurney that loads itself, saving the backs of EMT’s.

Payne led members of the community, including emergency service volunteers in a “washing down” ceremony for the ambulance. He explained that in the old days when things were horse-drawn, equipment would arrive dusty from the road and would be washed down before being put into service.

For his updated version of the ceremony, Payne filled twelve buckets with colored water, apologizing in advance for any possible stains to the concrete walkway. Then, on a count of three, everyone splashed the water onto the ambulance.