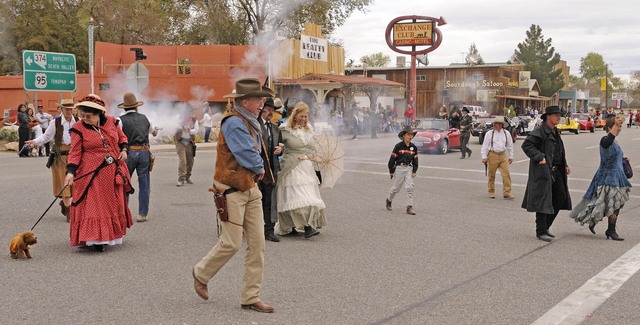 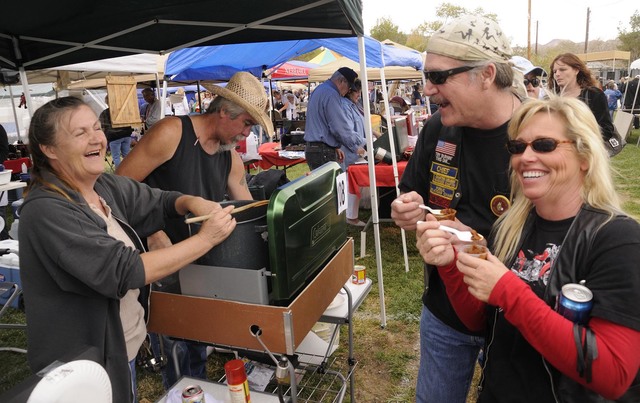 One of the main events of Beatty Days is a sanctioned chili cook-off. Attendees enjoy going from booth to booth sampling the chili and choosing who to vote for in the People's Choice category. Richard Stephens/Special to the Pahrump Valley Times

BEATTY — It’s the wildest, busiest, most fun time of the year in town again. Beatty Days kick off this afternoon in Cottonwood Park, with vendors scheduled to start opening and the first live band taking to the lower stage at 1 p.m.

More Halloween-themed events are scheduled for this afternoon, including the pumpkin carving and costume contests. The Miss Beatty and Junior Miss Beatty winners will also be crowned.

A poker walk begins at noon and participants will turn in their cards by 3 p.m. on Saturday.

On Saturday the action heats up, starting with a 7 a.m. pancake breakfast in the park hosted by the VFW, which will be repeated Sunday.

The parade, which has over 100 entries this year, will start at 10 a.m., with Les Parsons as Grand Marshal. Parsons has been an active citizen of Beatty and served for years as president of the Beatty Lions Club. It will also feature more than 60 antique and classic cars, which will be on display later in the park.

Saturday is crammed with events and displays. The park will be full of vendor and organization booths, as well those that are part of an ICS-sanctioned chili cook-off. Antique engines will also be on display and youngsters may “trunk or treat” among the classic cars. The large room of the community center will host the annual model train display by the Las Vegas Garden Railroad Club and the Pahrump Model Railroad Club.

Old West shootouts will occur throughout the day, and there will be live music throughout the event. Some of the scheduled events on Saturday are a 5K run and 2K walk, the traditional bed races, pinata breaking, the pickle liquor hoot-n-holler, chicken drop bingo, and a root beer drinking and belching contest.

Sunday’s events include a Dutch oven cook-off, a pet parade, a hula hoop contest, and a frisbee throwing contest, which is a new event this year. Things will wind down, and the vendors are scheduled to close at 3:00 p.m.

Richard Stephens is a freelance writer who has been covering the town of Beatty for more than 10 years.