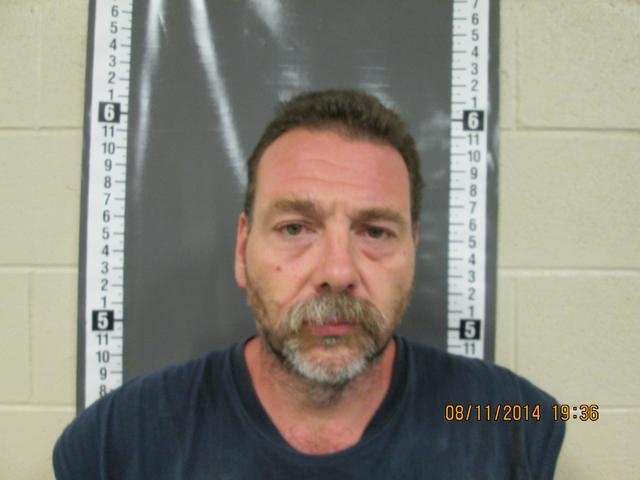 A Beatty man is behind bars for allegedly sexually abusing a child under 14 years of age causing substantial mental or bodily harm, lewdness with a minor and possession of stolen credit cards.

Richard Moog was taken into custody May 12, after Nye County Sheriff’s deputies received information regarding the alleged crimes from a police agency in central California.

According to the Nye County Sheriff’s Office, the 8 year old was living with her mother when she was assaulted on a couch at a residence in Beatty more than five years ago.

The victim told her older sister about the assault five months later in October 2010, but police in California were not notified by the victim’s family until July 2013 shortly after the family moved there from Beatty.

The victim told police that Moog had placed his hands down her pants and panties on at least three occasions in May 2010.

On Aug. 7 2013, California authorities provided the victim with an anatomically-correct school health chart where she used a crayon to circle the groin area of her body where Moog allegedly touched.

California authorities reported the crime to Nye County authorities on Aug. 17, 2013, but it’s unclear why it took nearly two more years before Moog was arrested.

Nye County Sheriff’s deputies eventually made contact with Moog at his Beatty residence last week where he was arrested and taken into custody without incident.

Nye County Sheriff’s Deputies have had past dealings with Moog. He was arrested on domestic violence charges after allegedly attempting to run down the victim’s mother with a vehicle, violating temporary protection orders and possession of a firearm by a prohibited person.

Authorities are also trying to determine whether additional sexual assaults occurred as Moog had lived with the family for more than four years.

He remains behind bars in Beatty on a $70,000 bail or cash bond. He is scheduled to appear in Pahrump Justice Court by video appearance Thursday.