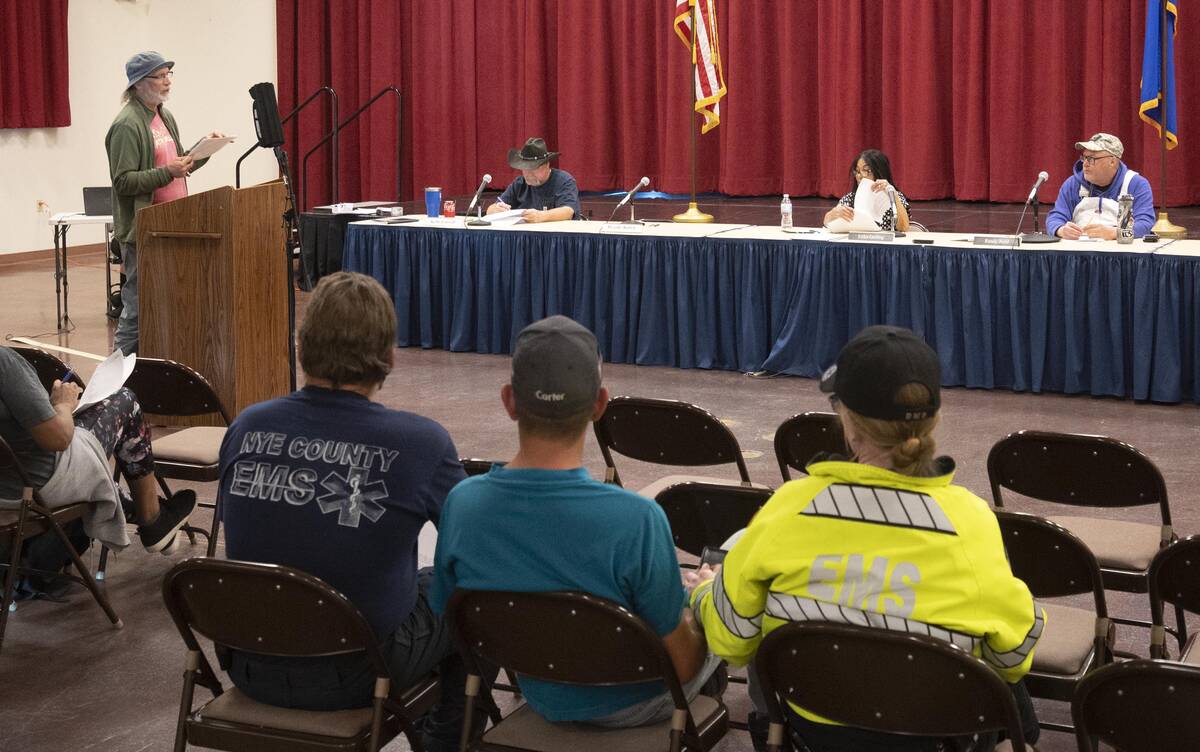 Richard Stephens/Special to the Pahrump Valley Times Kevin Emmerich speaks before the Beatty Town Advisory Committee at its March 14 meeting, asking that they consider writing a letter to the BLM in opposition to alternative routes being considered for the Greenlink West transmission line.

Kevin Emmerich came before the Beatty Town Advisory Committee at its Monday meeting, asking that they consider writing a letter to the Bureau of Land Management in opposition to one of the alternative routes being considered for the Greenlink West transmission line.

The 525-kilo-volt power line from near Las Vegas to Reno would parallel Highway 95 for much of its path. In passing through the Beatty area it faces the problem of having to negotiate a narrow corridor bordered by the Nevada Test and Training Range and several private properties and mining claims.

“None of it is convenient,” said board chair Erika Gerling. “What would be convenient would be if we didn’t have to deal with it.”

Emmerich said that the Alternative K would cause the power line to encroach on the viewshed of his property and that of others in the area.

“I wouldn’t want to be sitting on my front porch and be looking at that thing, either,” commented Board Treasurer Randy Reed.

One suggestion was that parts of the power line could be buried underground.

“It would cost more, but it is possible,” Emmerich said.

Gelring said she wouldn’t feel sorry if developers of the project had to spend more money to do that.

Alternative K is one of several options under consideration as NV Energy and the BLM try to find a way through the patchwork of properties.

“No matter what they do, someone will be unhappy,” Emmerich said.

Although Emmerich did not press for a letter to be sent immediately, Reed made a motion to send the letter of opposition. The motion died for lack of a second.

Board member Perry Forsyth assured Emmerich that he had not wasted his time in coming before the board, as he had made them aware of some things. He said that he had not seconded the motion because whatever action they took might conflict with something the Solar Project Committee might want to do later.

Emmerich and Cunningham are both members of that committee and are also co-founders of Basin and Range Watch, a nonprofit environmental organization challenging the development of various energy projects, which they refer to as “energy sprawl,” on Mojave, Colorado and Great Basin desert lands.

One action taken by the board in the meeting was the approval of spending up to $2,000 for five years of required quarterly sampling and analysis of the air compressor used by the Beatty Volunteer Fire Department’s to fill the self-contained breathing apparatus units used by the firemen. The money will come from the department’s operating budget.

Fire Chief Mike Harmon took the opportunity to deliver a report on the town’s emergency response call-outs for the year so far. He said that they were on course for a record year with 95 ambulance calls and 25 fire calls to date.