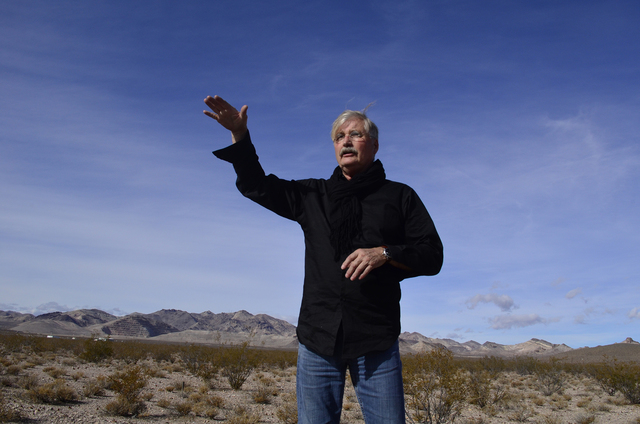 Resident Rupert Bragg-Smith went before the Beatty Town Advisory Board on Monday with a couple of requests regarding his issue with the lighting of the Family Dollar Store across the street from his property. Both did not gain support. Daria Sokolova/Pahrump Valley Times

BEATTY – Rupert Bragg-Smith went before the Beatty Town Advisory Board on Monday with a couple of requests regarding his issue with the lighting of the Family Dollar Store across the street from his property.

Bragg-Smith described the parking lot lighting of the store as intense and glaring, and said that it was harmful to his health.

He said that people in Beatty have the impression that he is against Family Dollar, but he said his only issue is the lighting. “I cannot live with those lights,” he said. He also complained of the light coming from inside the store itself.

He said that he was initially assured that the store would face U.S. Highway 95, not Amargosa Street, but that was not the case when it was constructed. It is unclear how this came about, as the sidewalk around the building was designed for the store to face the highway, as can be seen by the location of the handicapped access ramps.

He has not had success in contacts with the store’s corporate management and it has come to the point that he has been threatened with a restraining order.

Board member Erika Gerling told Bragg-Smith that it was too bad he had not come to the board with the issue before going directly to the company. She suggested that the board, or another party, could have been more diplomatic, to which Bragg-Smith responded, “I’m not a diplomat, I’m an engineer.”

Bragg-Smith had submitted two agenda items to deal with the issue.

The first was to ask the county to plant trees along Amargosa Street that would grow tall enough to block the light from the store. Board members found that impractical for several reasons, including cost, which they felt the county would not be able to handle, water, and the length of time it would take trees to grow to the adequate height.

The second request was to have the Board of County Commissioners “create a light trespass ordinance(s) or law(s) to be implemented and enforced in Nye County.”

Board chairman Dick Gardner said he felt this request was ironic since Bragg-Smith had previously indicated that he had moved to Beatty from Pahrump because of Beatty’s lack of regulations.

After much discussion, the board agreed to write to Family Dollar asking that they shield the parking lot lights, but they said it was a business, and all they could do was ask.

Bragg-Smith has said that he plans to sell the property if the problem cannot be remedied.

The board also dealt with responding to the Air Force’s request to withdraw a piece of land northeast of Beatty to enlarge the Nevada Training and Test Range.

The board considered a draft letter composed by resident Ryan Tweney and another document from David Spicer for Trails-OV. Both documents addressed negative recreational and economic impact on the community that would result from the withdrawal. Tweney’s letter also said that the withdrawal would hamper ongoing and developing archeological and historical research and habitat preservation efforts regarding the Amargosa toad.

Although the map shared by the Air Force was vague and could not be reconciled with existing topological maps, it is clear that the proposed withdrawal would close land being used for already developed mountain bike trails and others proposed for the future, and would also leave no corridor for off-road races in the area. It would also close off areas used for the Beatty VFW’s highly successful off-road poker runs.

Spicer said that if this land were taken away, it would squeeze Beatty tightly between the Nevada Training and Test Range on one side and national park lands on the other, so that events would have to move to the other side of the state, “affecting not just us, but the whole state.”

Tweney’s letter had proposed a compromise — that the land might be restricted only during Red Flag exercises, but it was agreed that this should be removed after several people spoke against that approach, saying it would open the door to a “give them and inch, and they’ll take a mile” situation.

The board decided to use both documents to compose their comments to submit to the Air Force and also to send it to “everybody,” which would at least include members of Congress and the county commission.

The board also approved a proposed expenditure of up to $49,000 for the purchase of an additional vehicle for the Beatty Volunteer Fire Department, explaining that it would be a request for money from the county’s fire and safety tax fund.

They also decided to alter their regular meeting schedule in December and will hold one meeting on Dec. 19, barring any need to call an emergency meeting.

Richard Stephens is a freelance writer living in Beatty